11-18-2019 06:14 PM
Nashvilleâ€™s Grand Ole Gameroom Expo (Grand OGRE) is now in its fourth year and for 2019 was again held at Millennium Hotelsâ€™ Maxwell House. The complete story on the history of 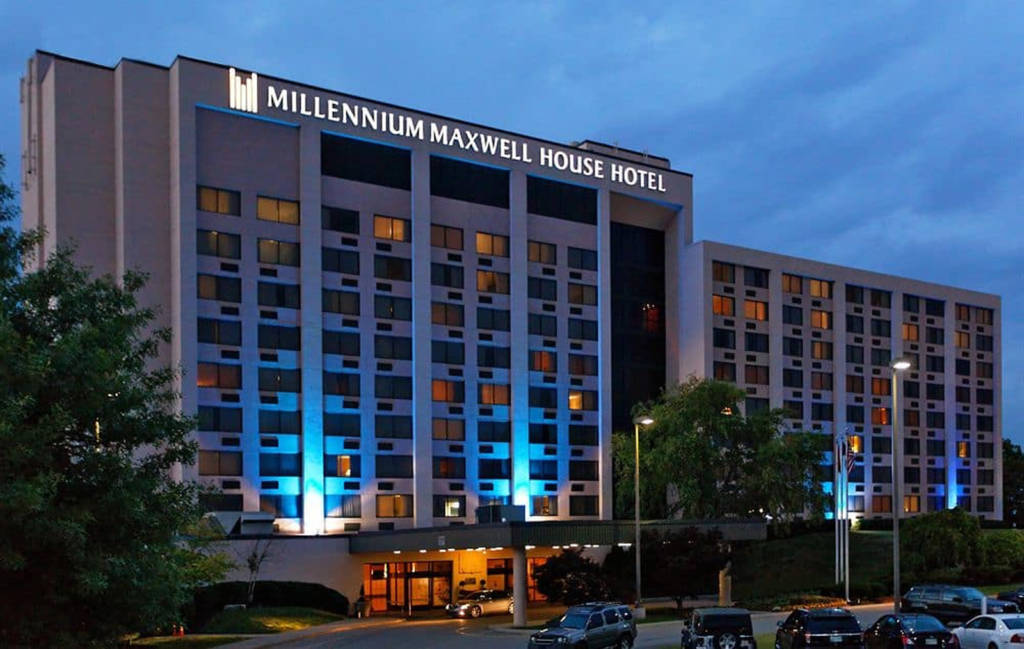 The Millennium Maxwell House Hotel, home of the Grand Ole Gameroom Expo
As in 2018, a three-day adult weekend pass was offered by the Grand Ole Gameroom Expo which I feel is a very good deal for all ages – $60 got adult attendees three-day unrestricted access to all of the gaming areas as well as the seminars. Childrenâ€™s passes could be purchased for half the adult price. 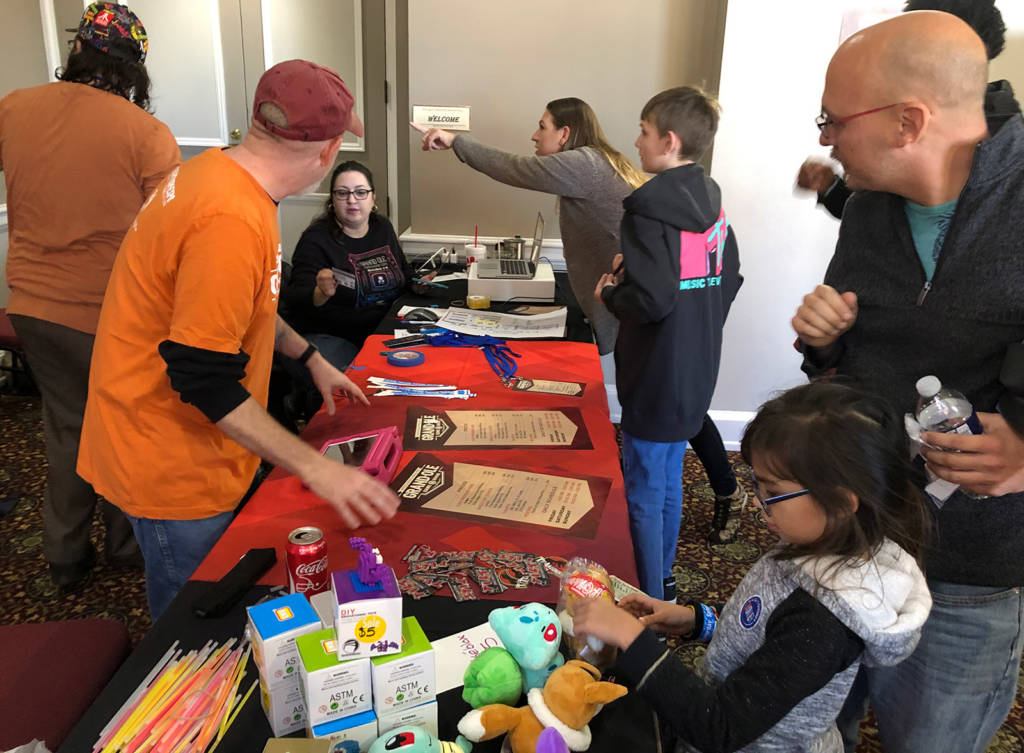 The entry desk
The organizers offered attractive event T-shirts and posters for attendees for a small extra cost. 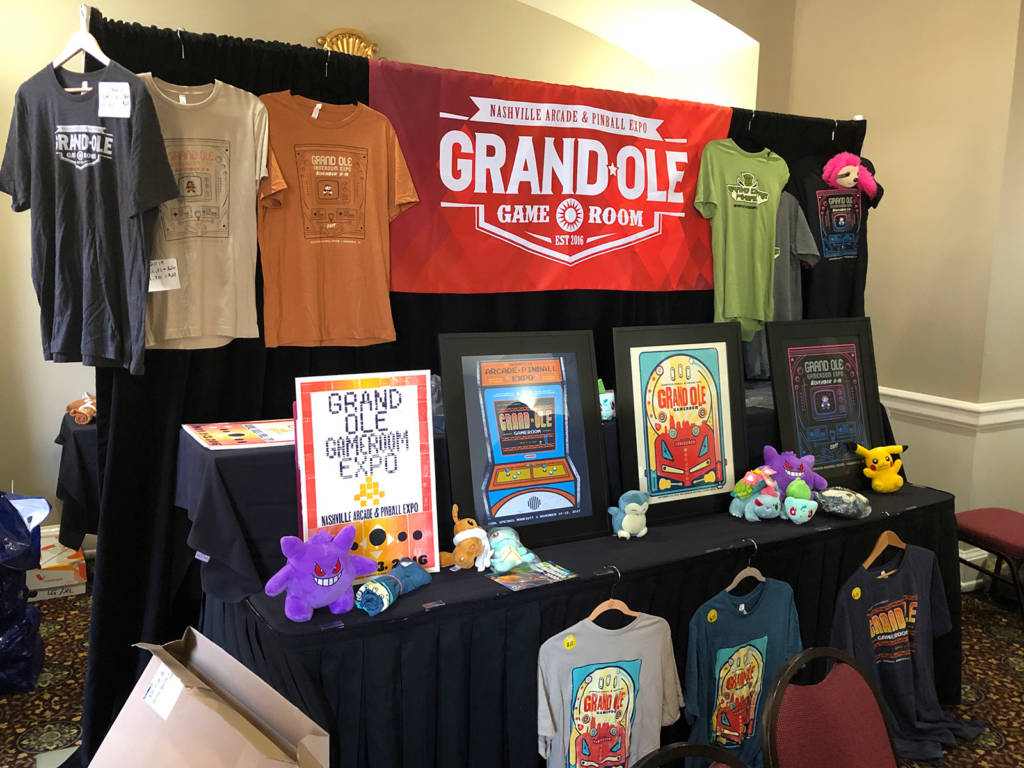 Show merchandise for sale
The 2019 edition of Grand Ole Gameroom Expo offered attendees hundreds of pinball games, classic and modern arcade video games, and games of skill such as skee-ball and air hockey in the spacious Grande Ballroom. 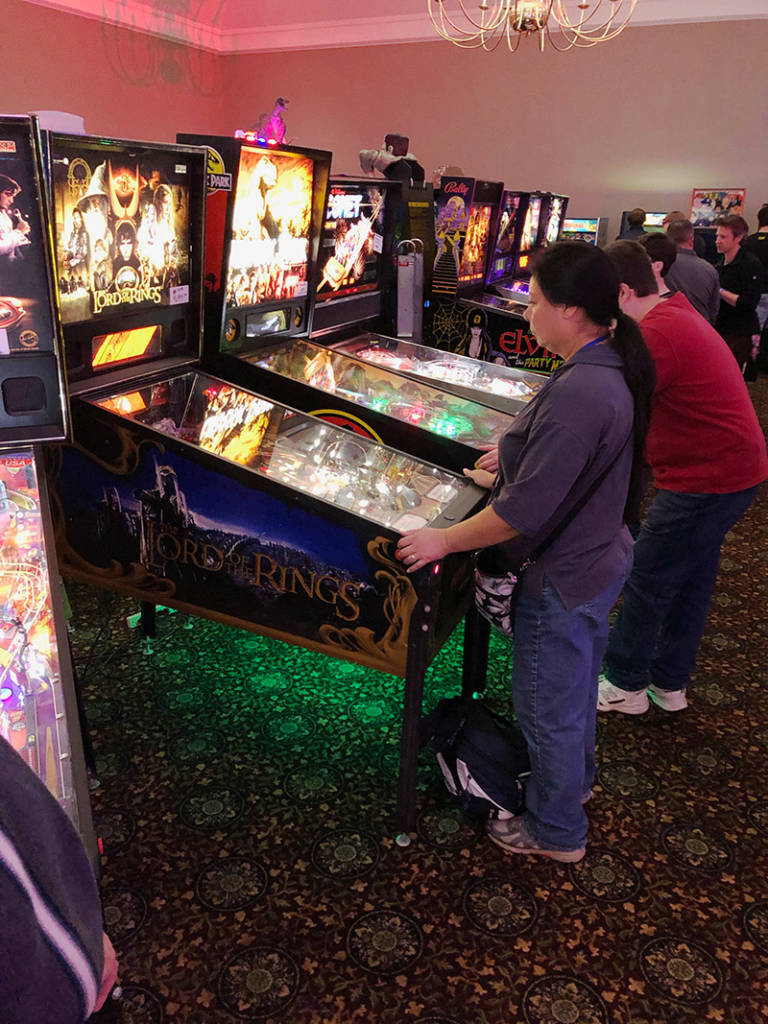 A selection of the pinballs available to play
As you would expect, all games were set on ‘free play’ or had insanely low free game thresholds. 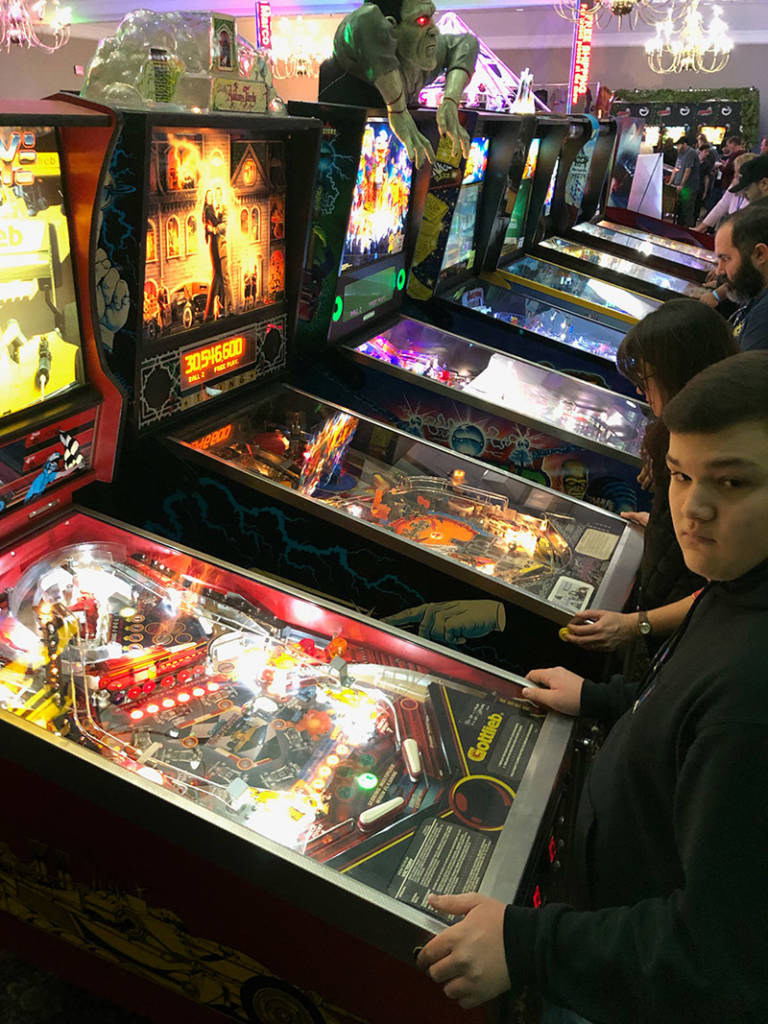 More of the free play games
The main gaming area was open until 2am on Friday and Saturday night, and each night the gaming area was buzzing with activity until the doors were locked. 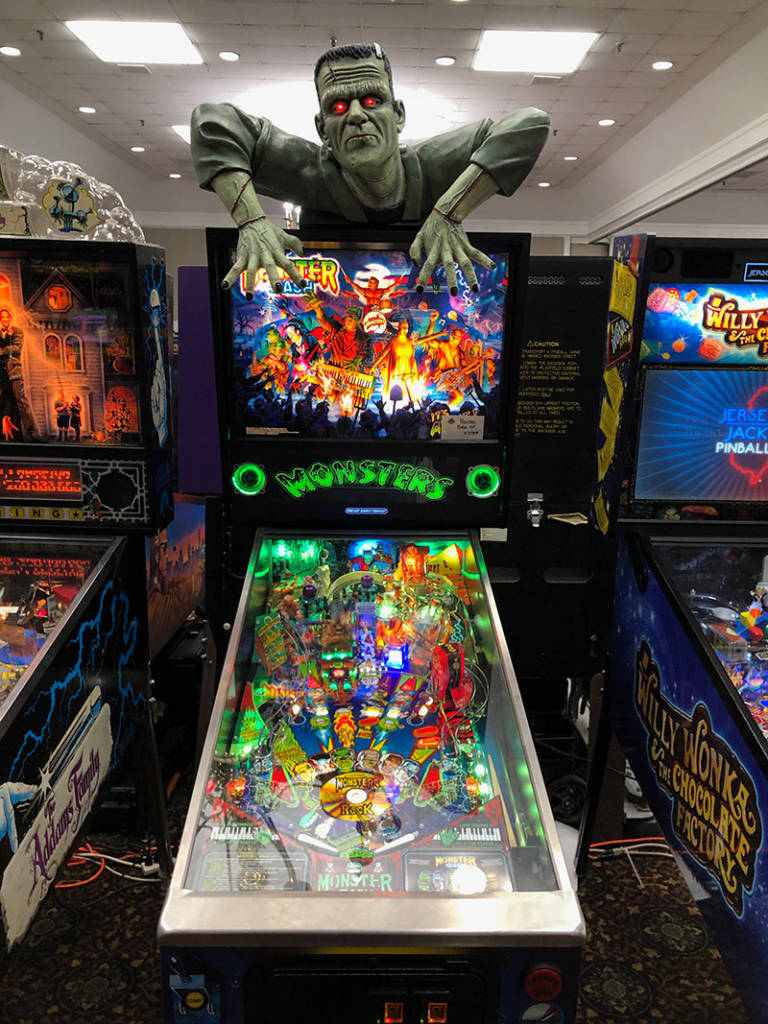 Frenkenstein’s Monster tries to escape from the Monster Bash remake machine
There were many of the newest pinball games available to play courtesy of Marco Specialties, Flip N Out LLC of Benton, KY, and Music City Pinball. The companies had representatives on hand to answer any questions, hand out flyers and also award prizes such as t-shirts and hats to attendees who achieved high scores. Marco Specialties also had Pinball-themed wearables for sale just off of their gaming area. 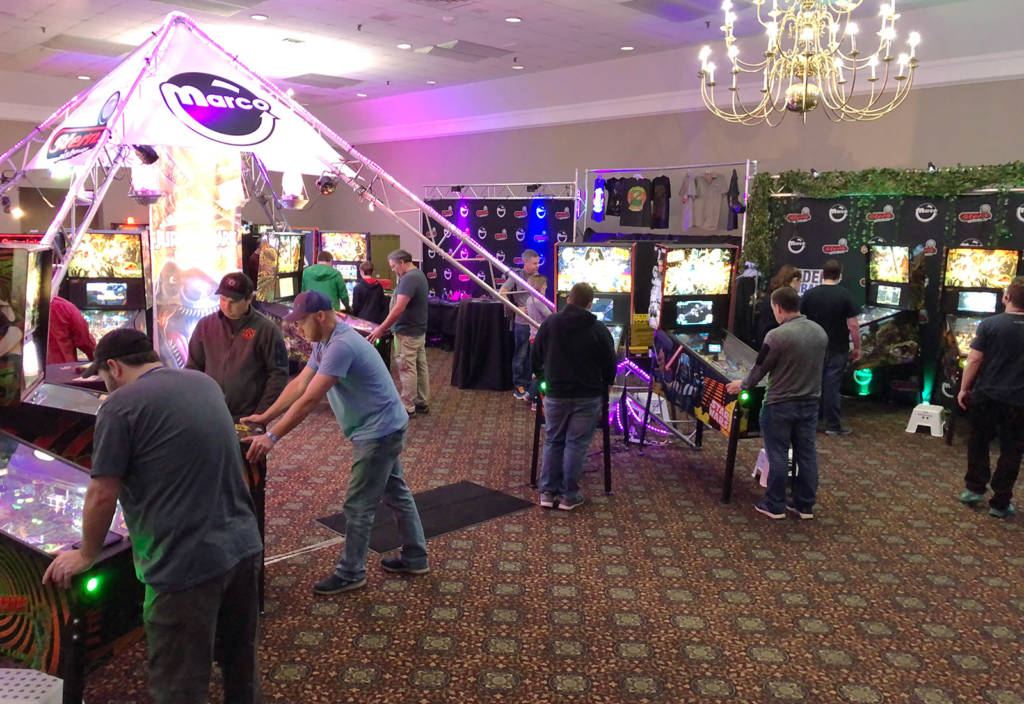 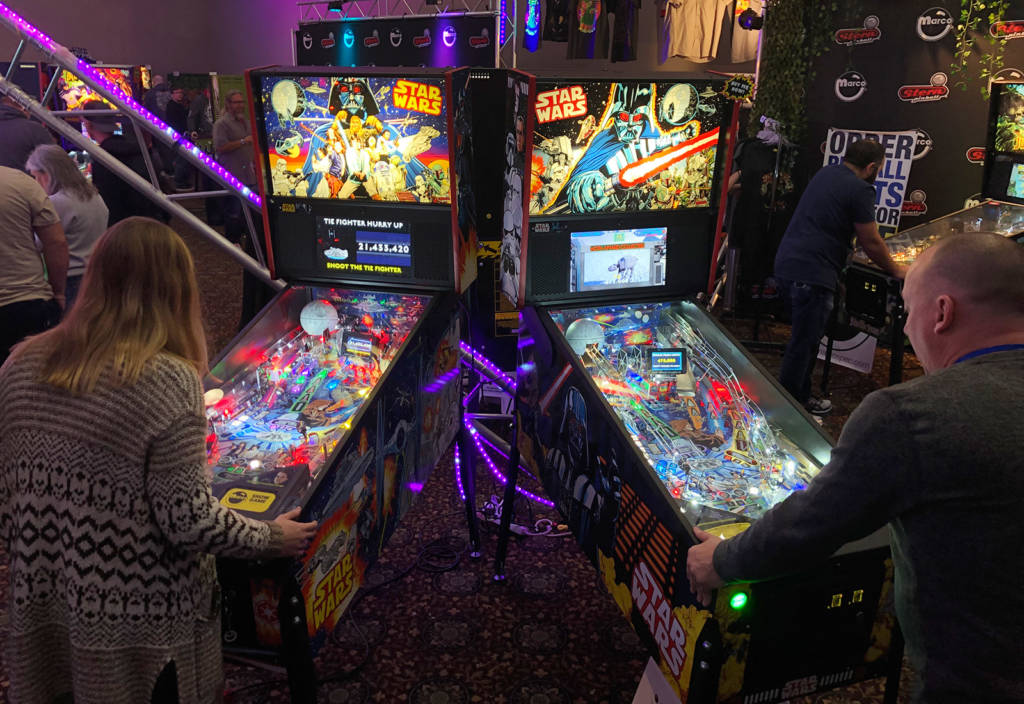 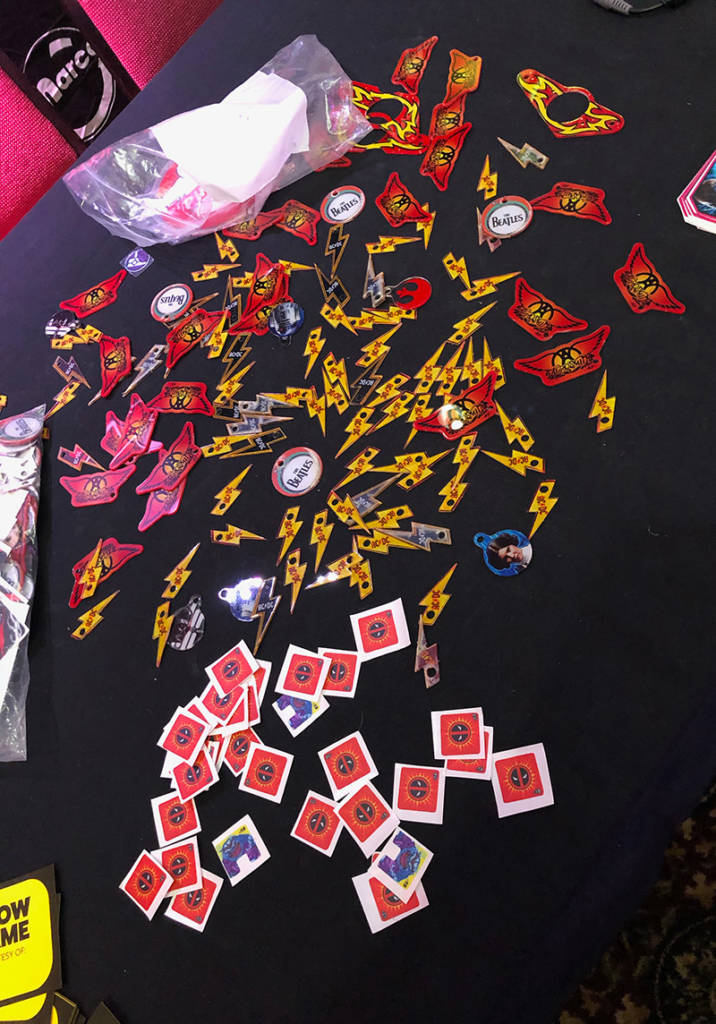 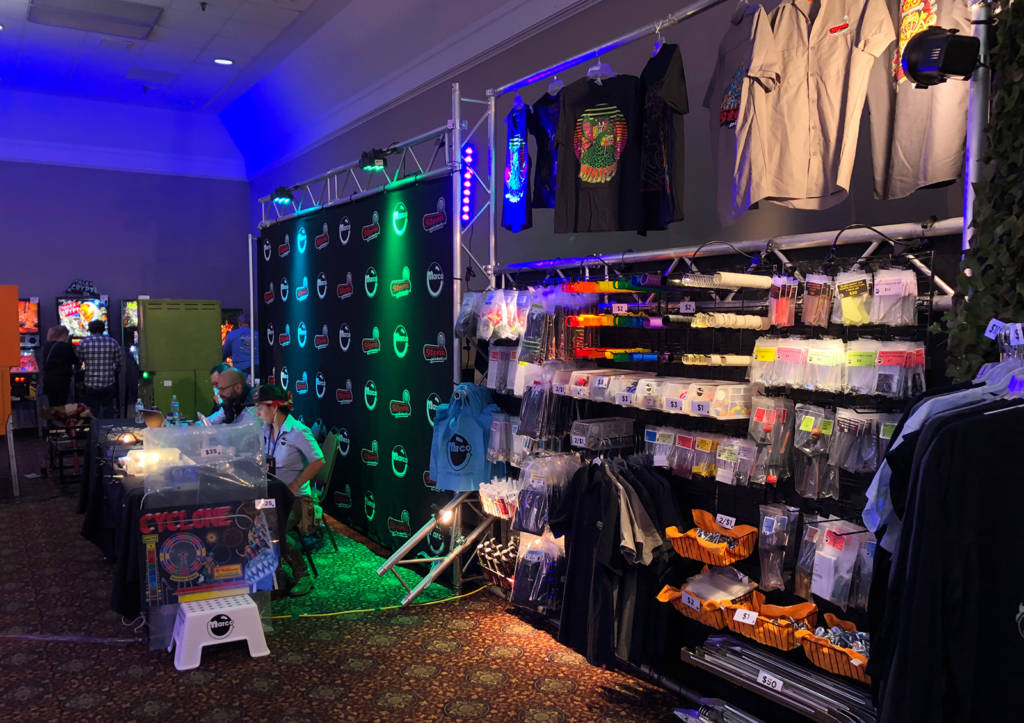 Various pinball-themed items of clothing were available too 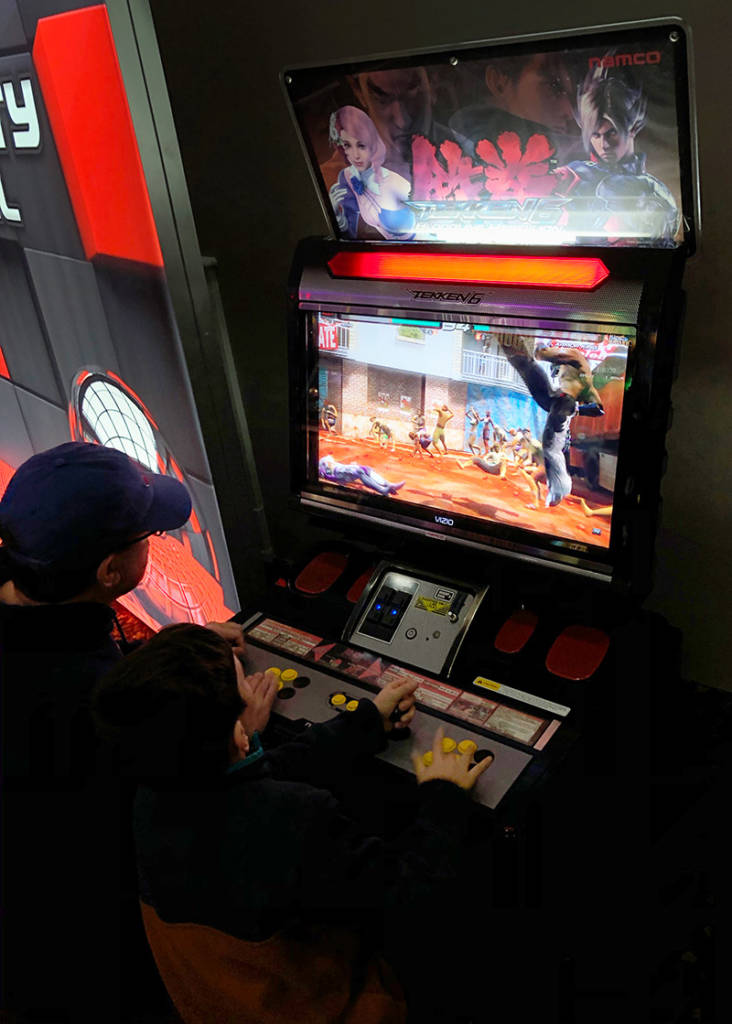 It certainly wasn’t all pinball though 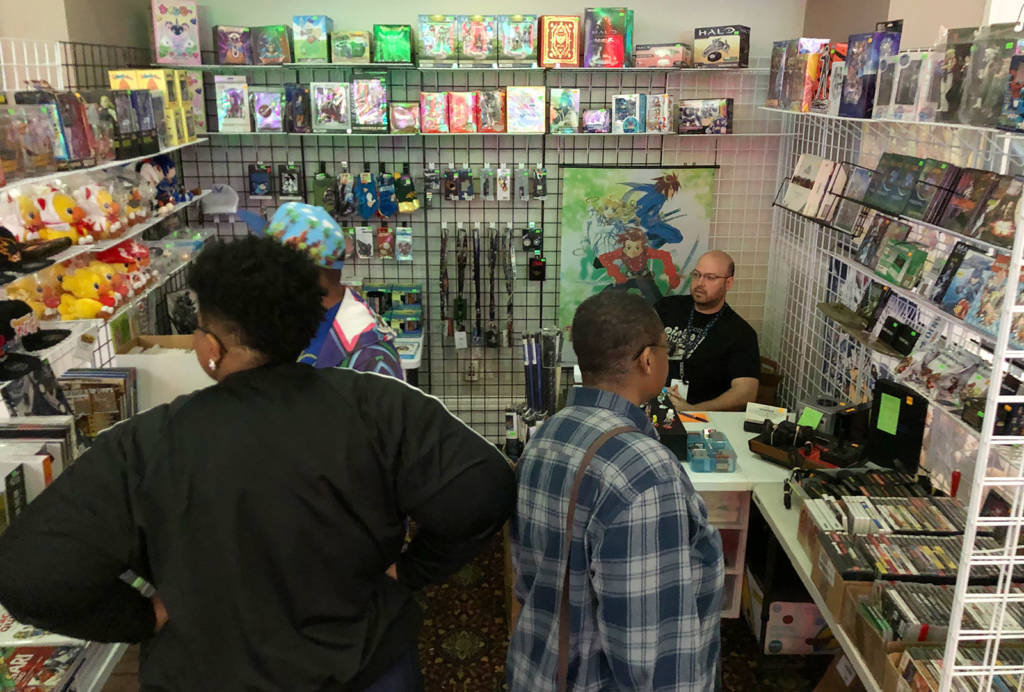 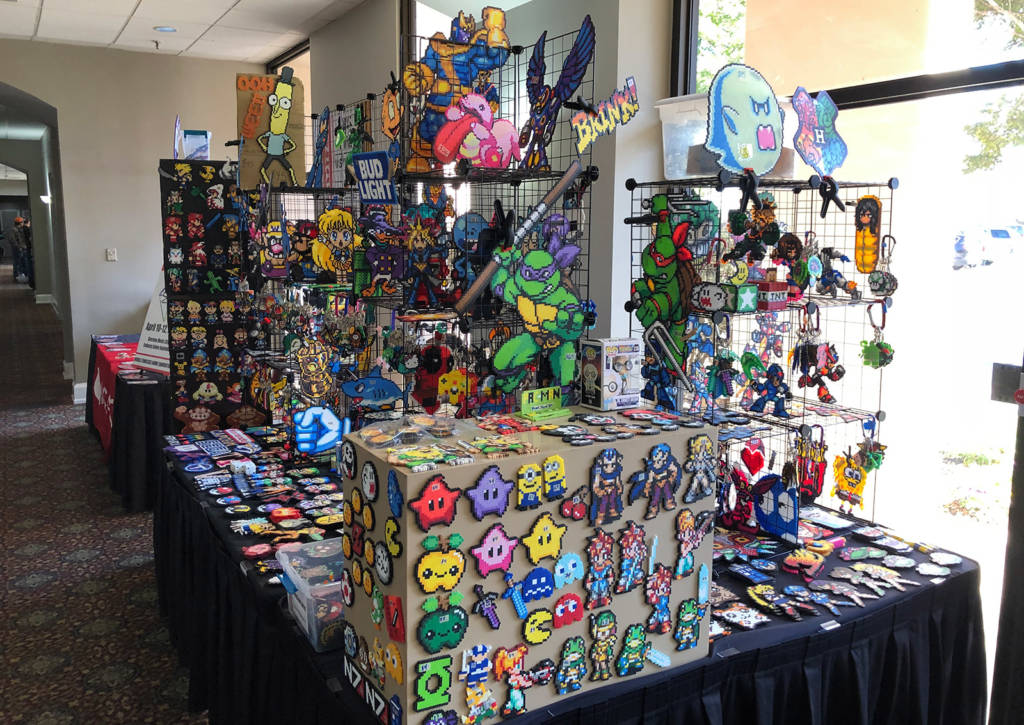 Most of the popular 8-bit characters were represented here
A demonstration Pong cocktail table near the Music City Pinball area seemed to be in constant use by young and old alike. Terri and I even tried our hand at it with Terri whipping me soundly. 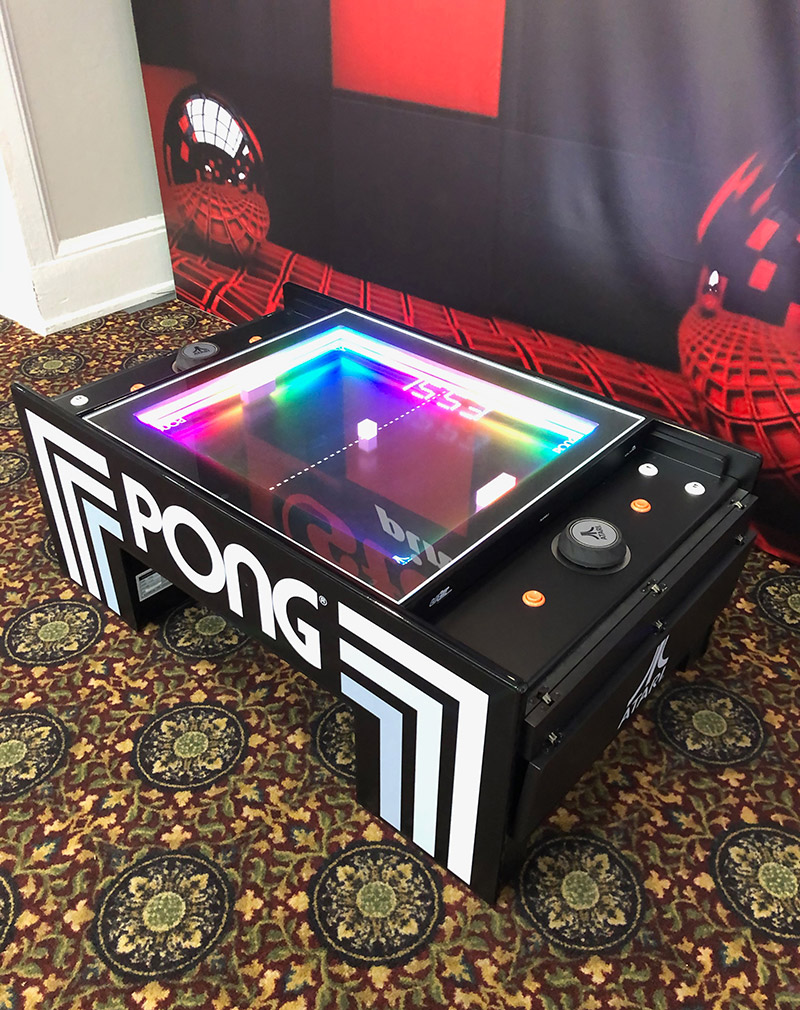 The Pong table from Atari
The Promenade area outside of the Grande Ballroom was lined with vendors of all types selling clothing, accessories, parts and also console game cartridges. For this show you did not need to purchase an admission pass to have access to the vendor areas.

There were dozens of console games set up in the International (Classic Games) and Embassy (Modern Games) meeting rooms for free play and tournament use. 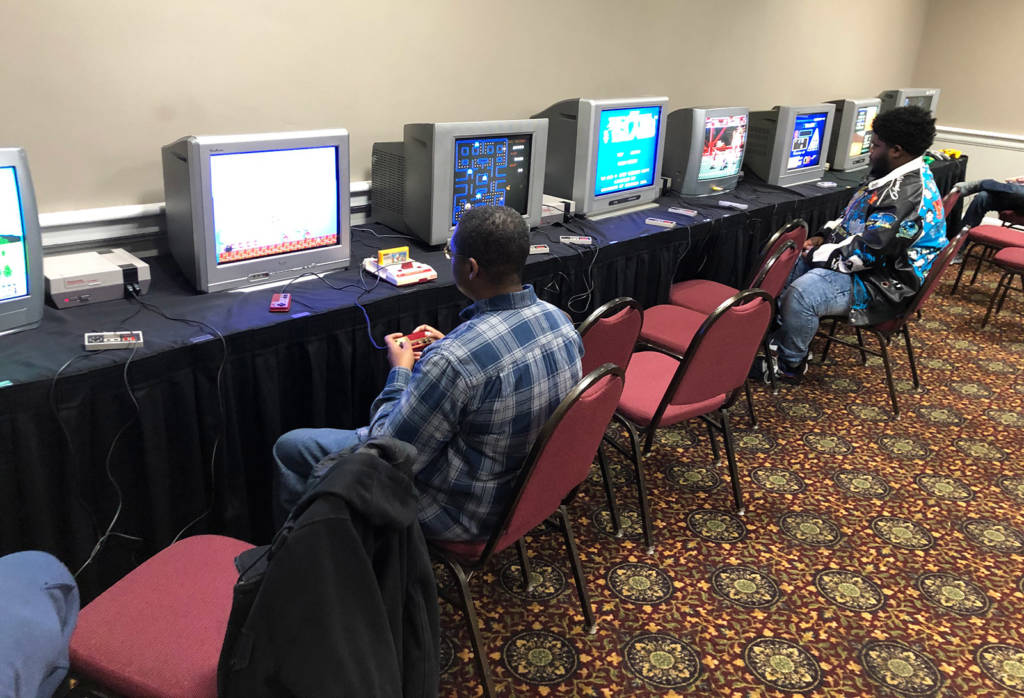 Classic console games
The Forum West room had a lounge area dedicated to Playstation VR gaming; this gave attendees a chance to try out the latest virtual reality games and enjoy this new technology. 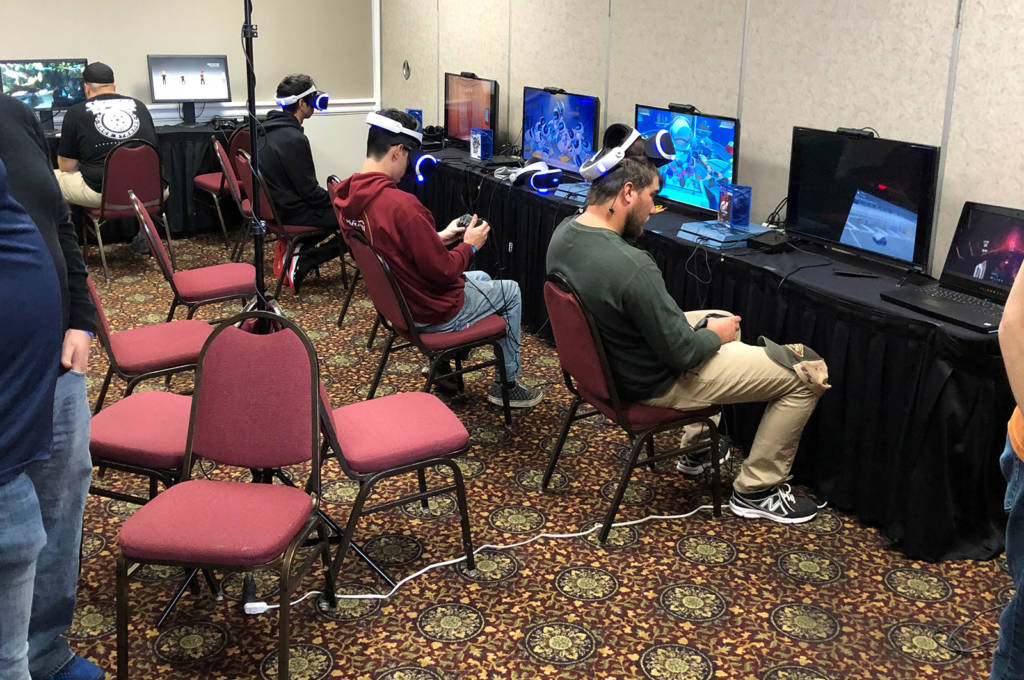 Checking out the latest VR games 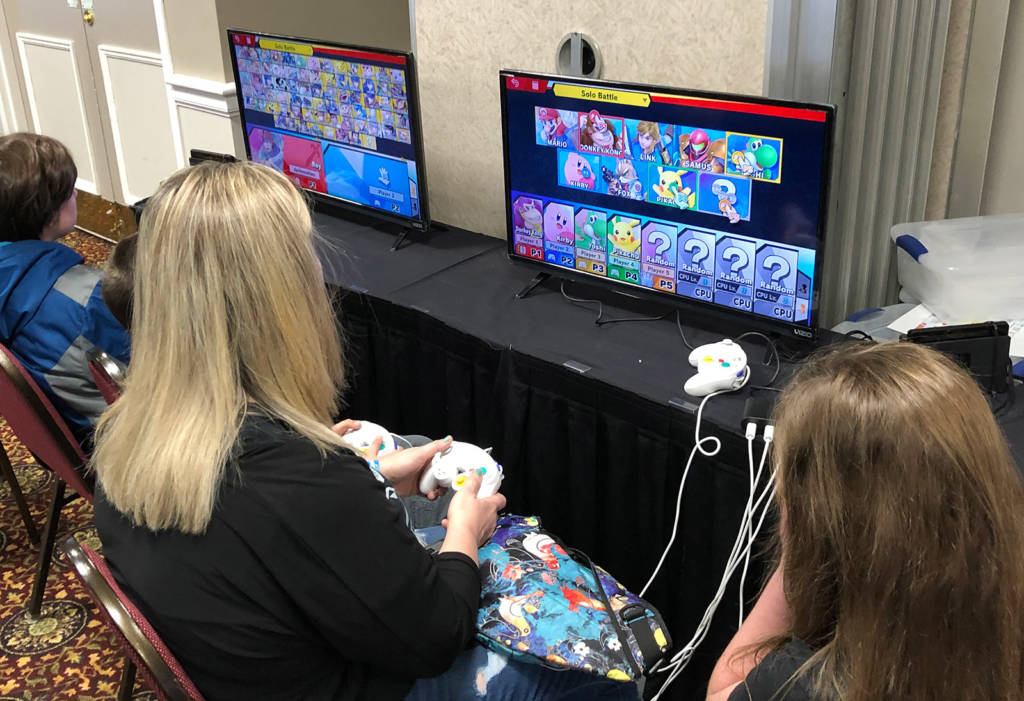 Enjoying some of the multi-player games
Also in the Forum West were Xbox360 LAN games such as HALO and Unreal Tournament.

The Forum East room hosted the Grand OGRE’s seminars. The first two seminars on Saturday were in a ‘live podcast’ format held mid-Saturday morning by Whitney Roberts and Brent Griffith. Brent and Whitney may be known by some Pinball News readers as the hosts of the Broken Token classic arcade and pinball podcast. 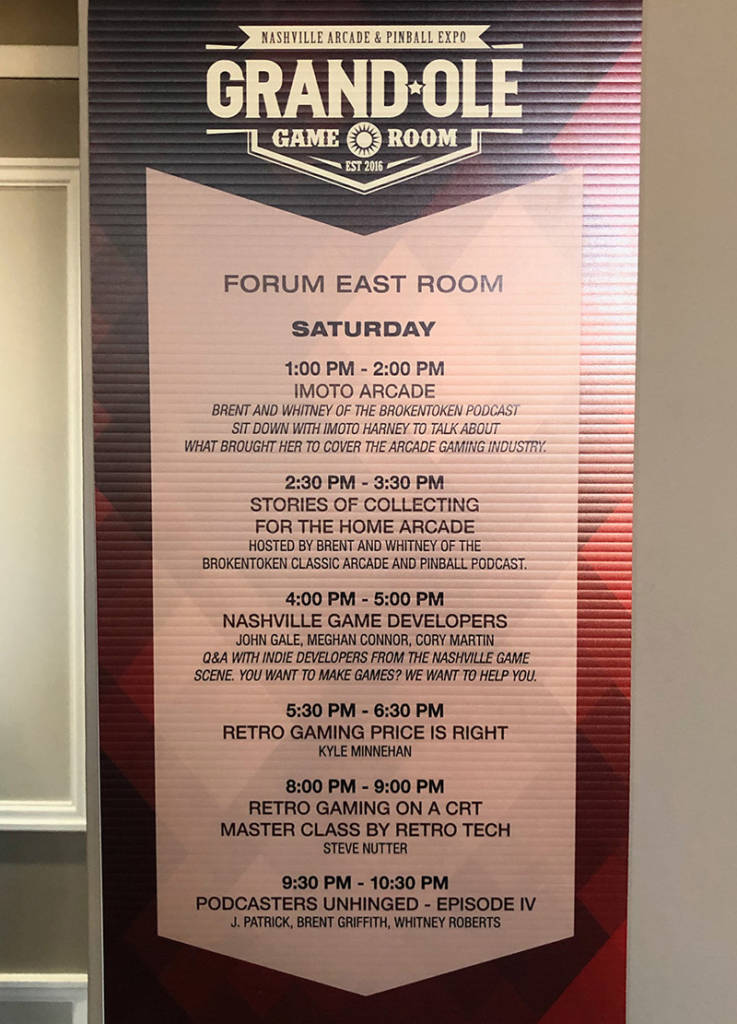 The seminars schedule
The first seminar was a highly informative interview of Pinball Media personality Imoto Arcade (Harney). Imoto discussed such things as her parents early influence on her becoming a passionate gamer and the trials of being on the road nearly non-stop for the last 5 years in support of Marco Specialtiesâ€™ presence at pinball and gaming shows across North America. Imoto also hinted at her involvement with a future feature-length movie with a pinball theme. 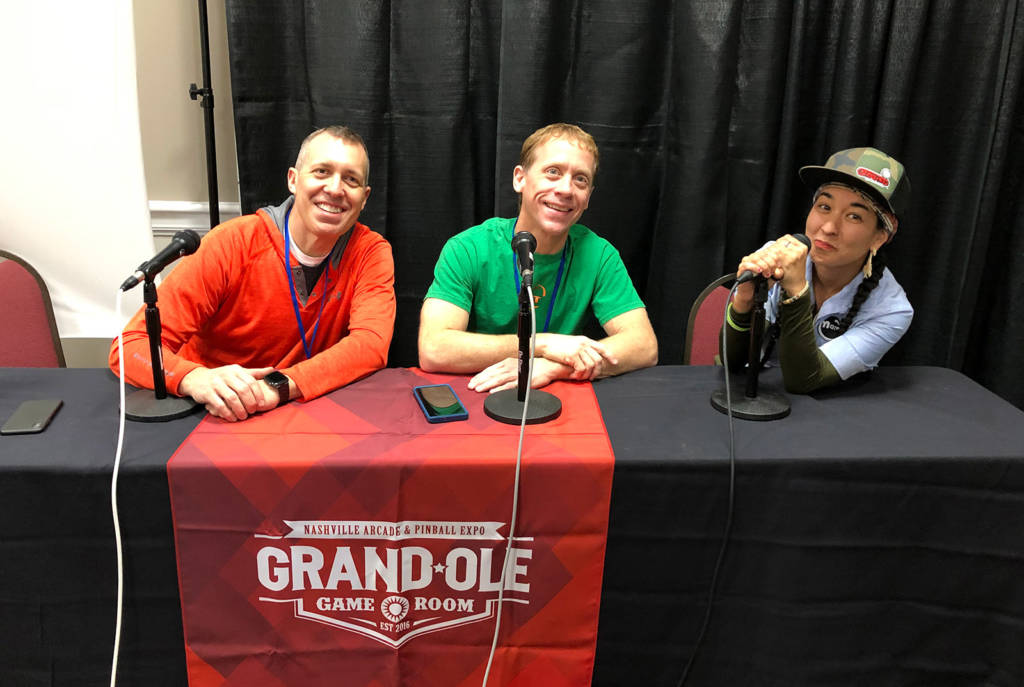 Imoto with Whitney and Brent
The second seminar moderated by Whitney and Brent was Stories of Collecting for the Home Arcade with guests Belle Lacy and Shawn Wheeler. The joys and pitfalls of setting up an arcade in the home were discussed in detail. I feel that this seminar will be a ‘must watch’ for the majority of our readers when the seminar videos are released to YouTube by the show organizers.

After a Friday night ‘split flipper’ icebreaker social, the Grand OGRE match-play pinball tournament was held Saturday afternoon and evening in the new for 2019 dedicated tournament area in the 10th floor ballroom. Once again the tournament was billed as “Tennesseeâ€™s Largest IFPA Pinball Tournament” based on the number of entries. Sunday had the women’s tournament. It was very gratifying to see so many women participating in this tournament. 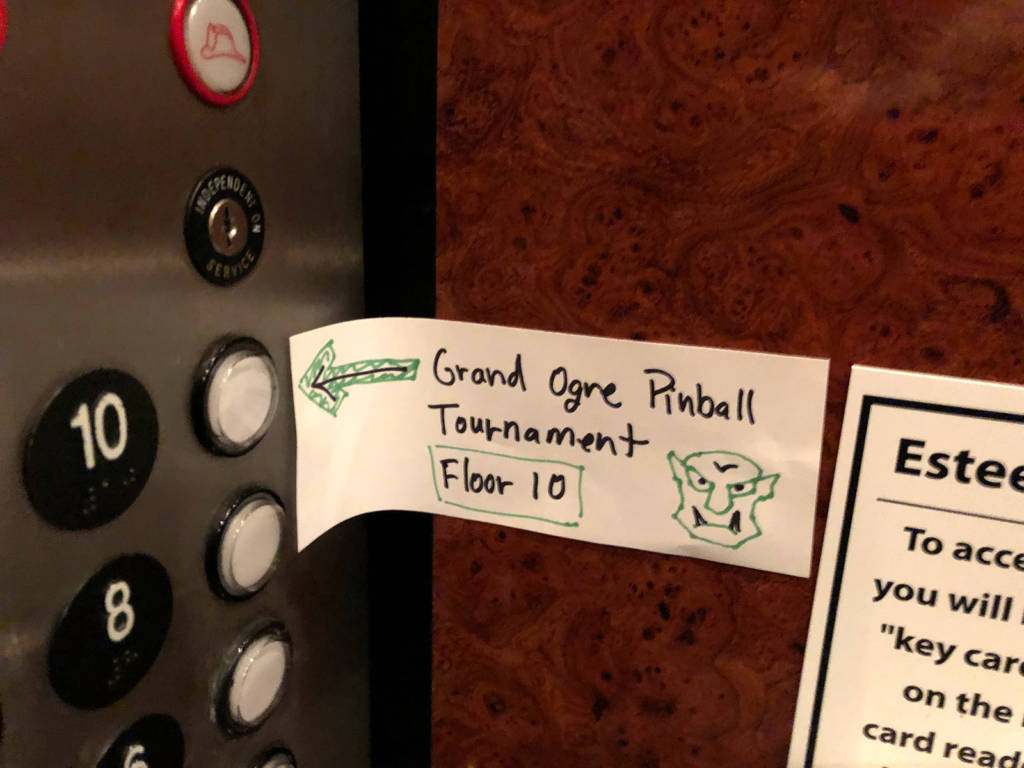 Up to the tenth floor for the tournaments 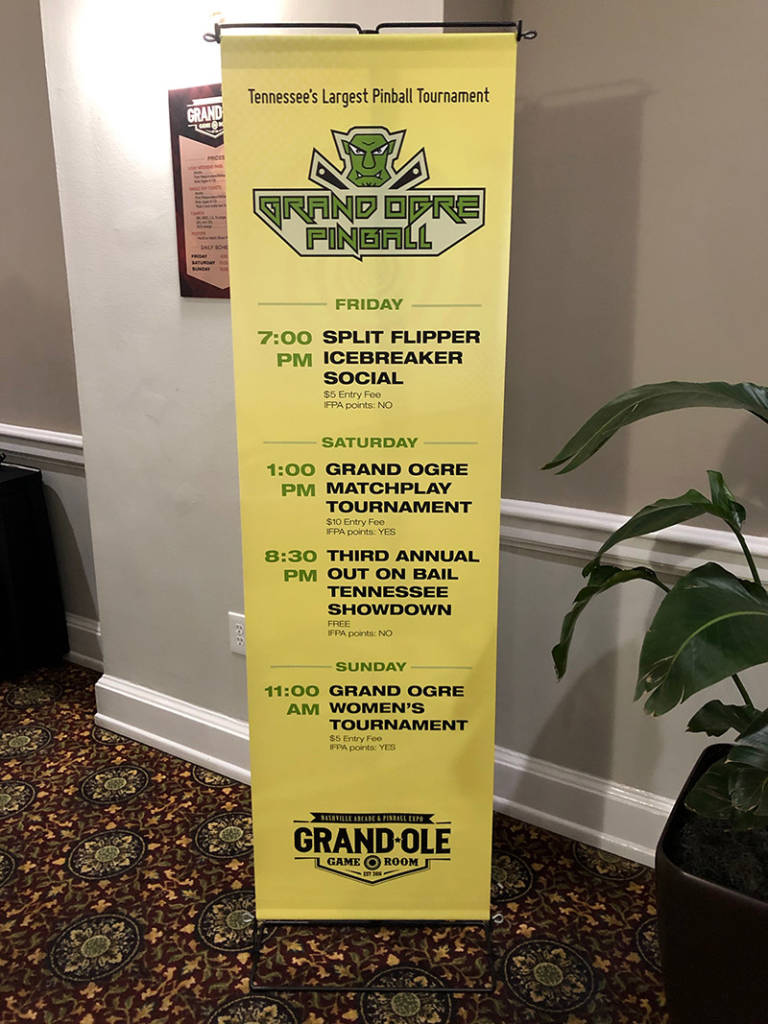 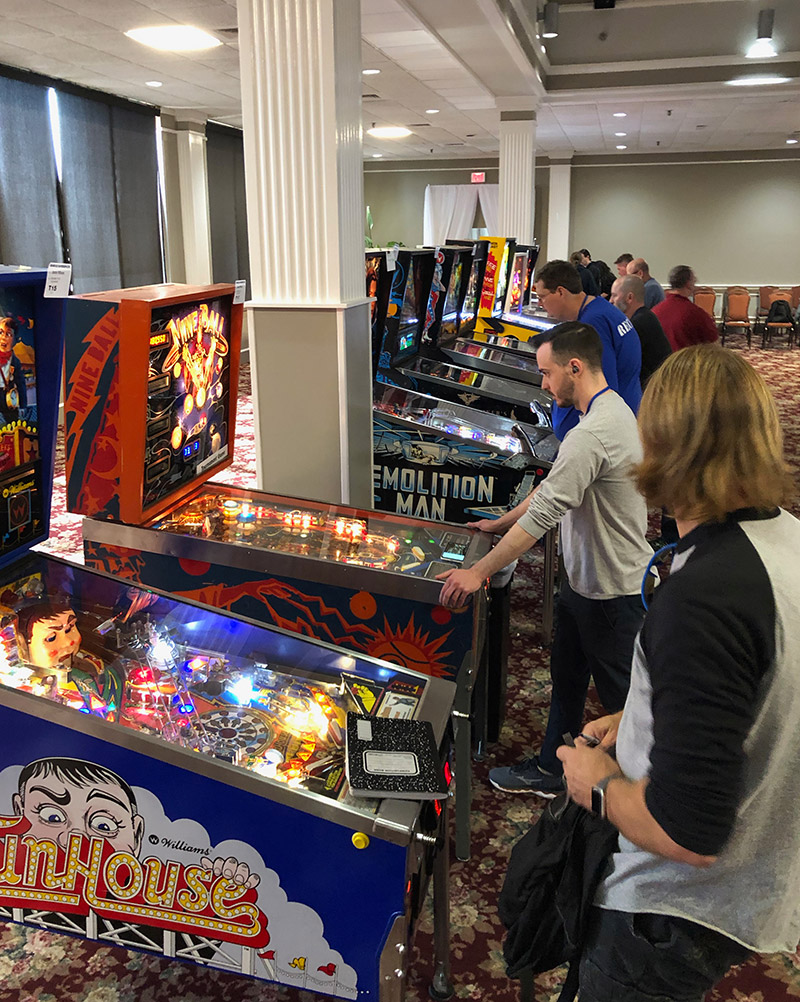 The tournaments room
Also new for 2019 were live tournament standings posted on a large-screen monitor. The people running the tournament scoring did an exceptional job of keeping the scores updated so that at a glance anyone could see how the play was progressing. Again in 2019 there was a Nashville vs Memphis ‘out on bail’ team challenge tournament late Saturday night. 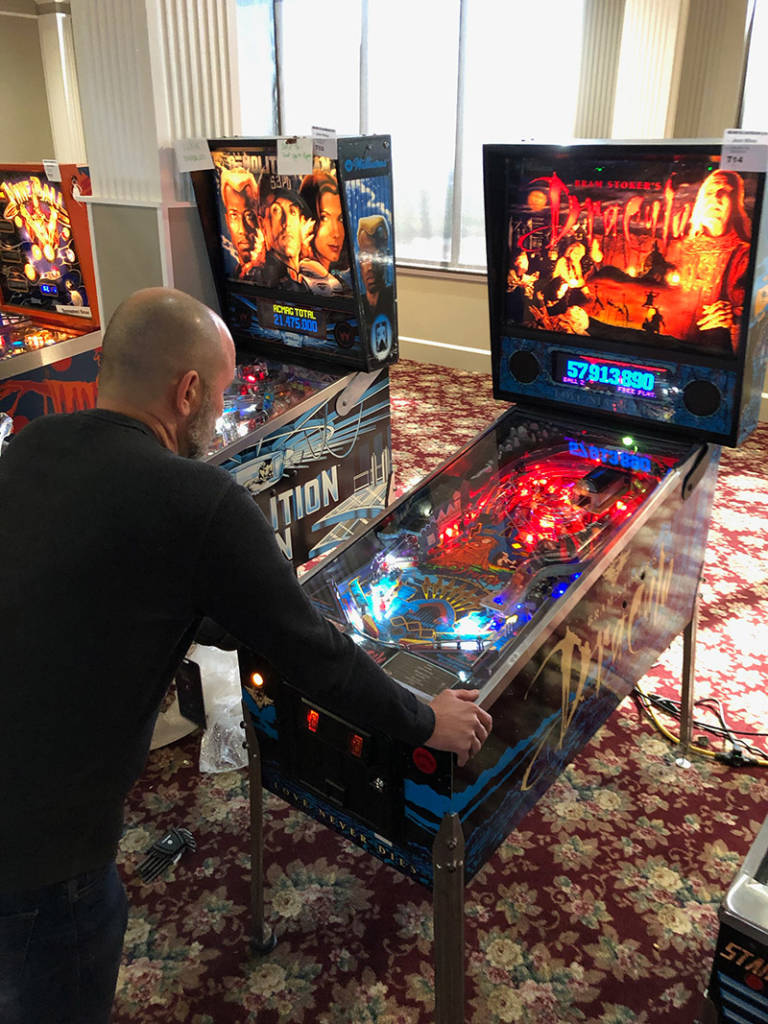 More tournament games
I appreciated the beautiful view of downtown Nashville from the panoramic windows surrounding the 10th floor ballroom, and I would imagine the tournament contestants did also when they were not in the midst of playing a game. 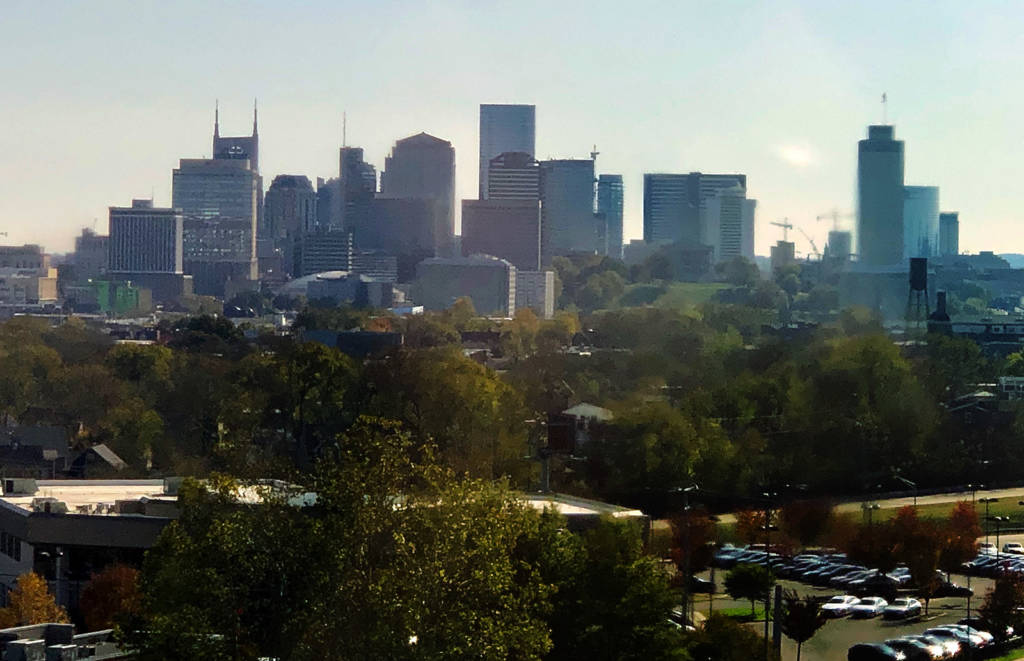 Kudos to the volunteers who worked diligently to make this all work super-smoothly. The Red Bull drinks company was again one of the partners for the Grand Ole Gameroom Expo and there were complementary Red Bull beverages available near the registration desk.

The innovative refreshment area just outside the main gaming area was expanded this year. In addition to soft drinks and ‘adult’ beverages, hot and cold sandwiches and other snack items were available for purchase. 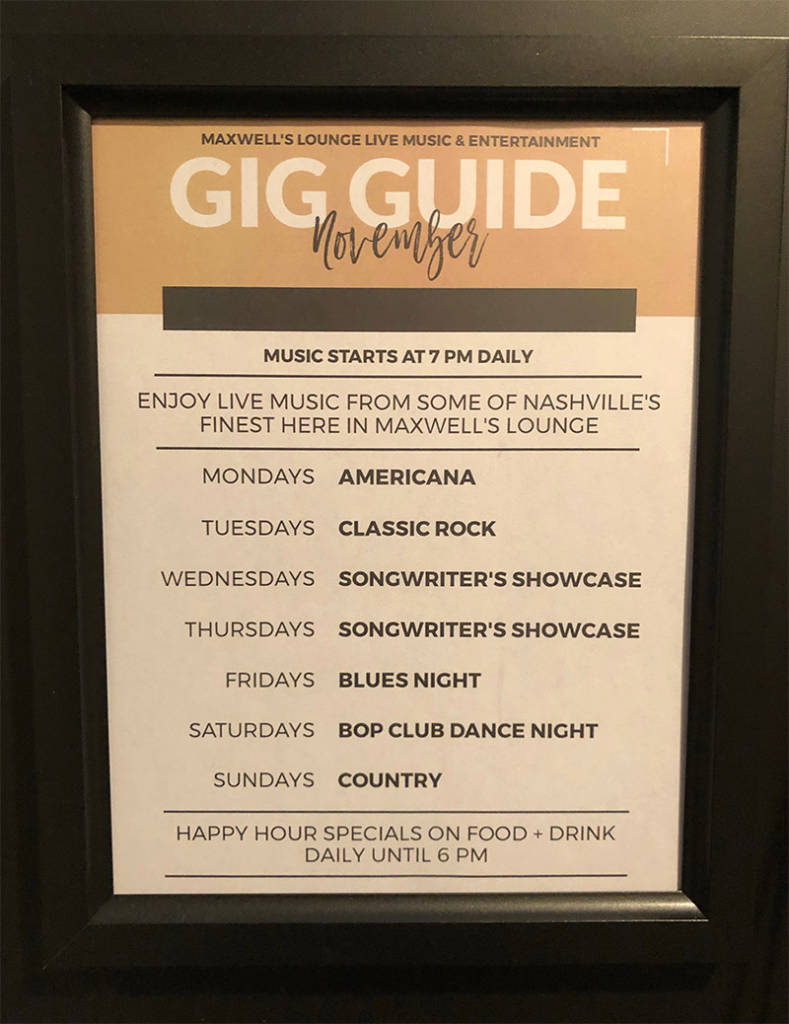 Some of the live music at the hotel
Overall I feel that the Grand Ole Gameroom Expo is a very well-run and entertaining pinball and arcade game show that has become a must-attend for both players and exhibitors alike on the North American pinball show and Expo scene. 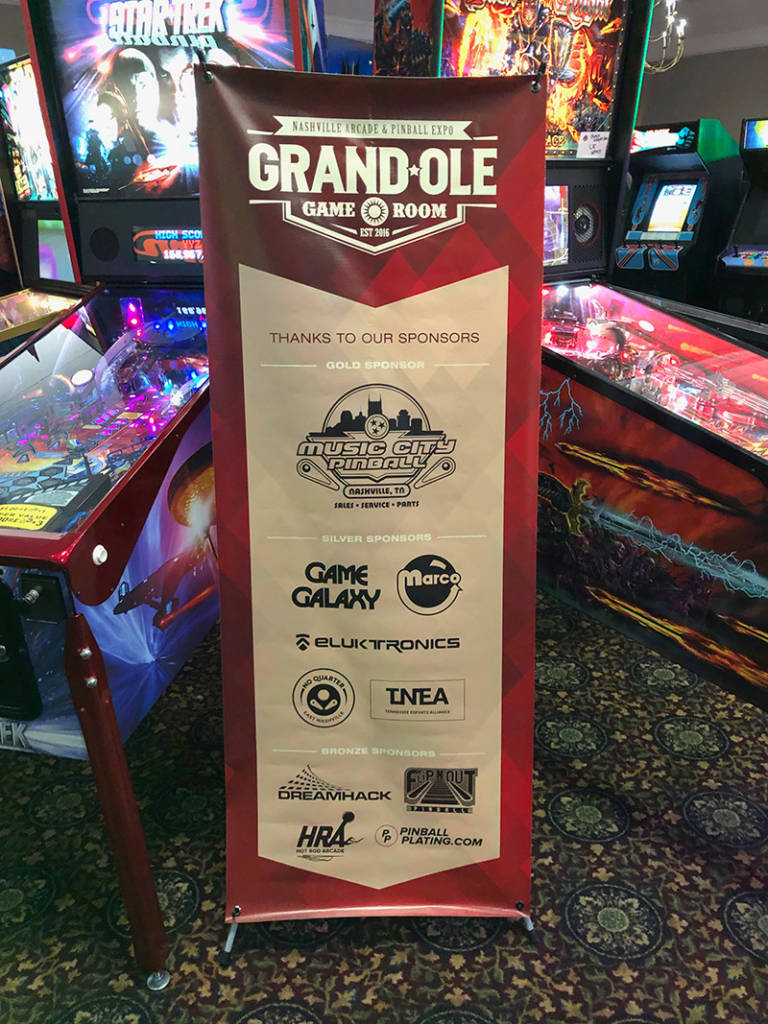 Show sponsors
2020 dates for the Grand Ole Gameroom Expo have not yet been announced, but when they are known we will let you know right here in the Pinball News Diary.

Sincere and heartfelt thanks to David Corrigan, Digital Hero Games LLC, and all of the show staff for their assistance in covering this show.