KEEPING THE BALL ALIVE REVIEW
Wayne Johns
As one of the first in the UK to receive my copy of Keeping the Ball Alive – 30+ Years of Stern Pinball, Pinball News’s Editor, Martin, asked me if I would be interested in writing a review of the book.

To fully appreciate this review first you need to understand the journey it has taken to get this book.

On October 14th, 2016 a Kickstarter project was launched by Paperflock Inc. to produce a coffee-table-style book documenting the thirty years of Stern pinball. 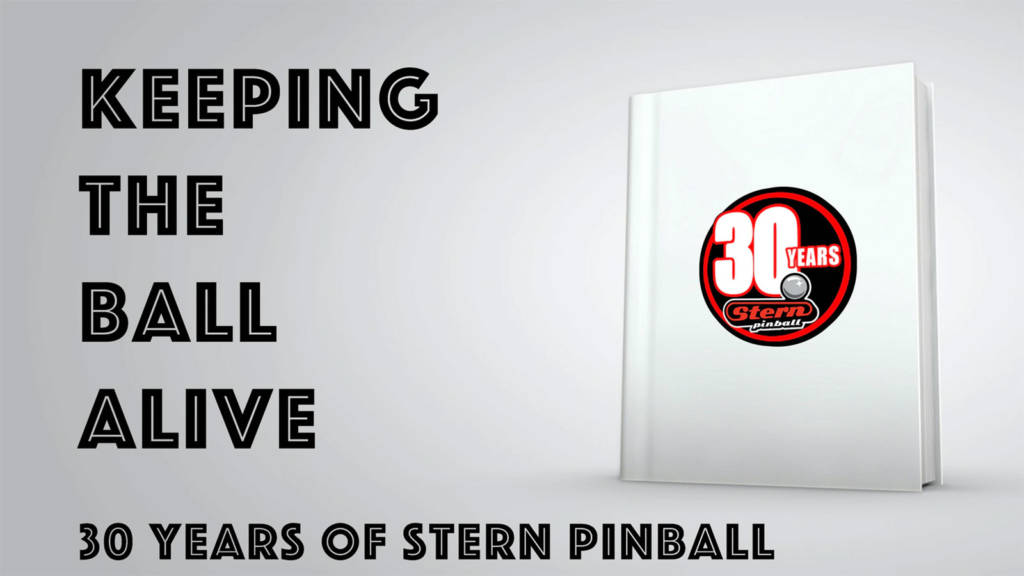 As with the majority of Kickstarter projects, you could pledge extra to get additional bonuses, including such things as T-shirts, jackets, exclusive Zombie Yeti artwork, posters, a dust jacket signed by Stern’s designers and even Slash’s signature. Prices for these went as high as $2,500 (£1,850)! Estimated delivery was May 2017.

I opted for the basic package of just the book and was excited to see that they reached their target of $50k pledged from 444 backers just 2 weeks after launching, and that the book was indeed going to be made.

At first updates came regularly from Paperflock, but then excuses were made as to the delays. Then there was just radio silence.

As the weeks, months and YEARS passed, I had given up hope of ever receiving my book and put it down to experience.

Then, in November 2020 Paperflock announced that the end was in sight and they were confident of being able to print and ship the books in time for Christmas. 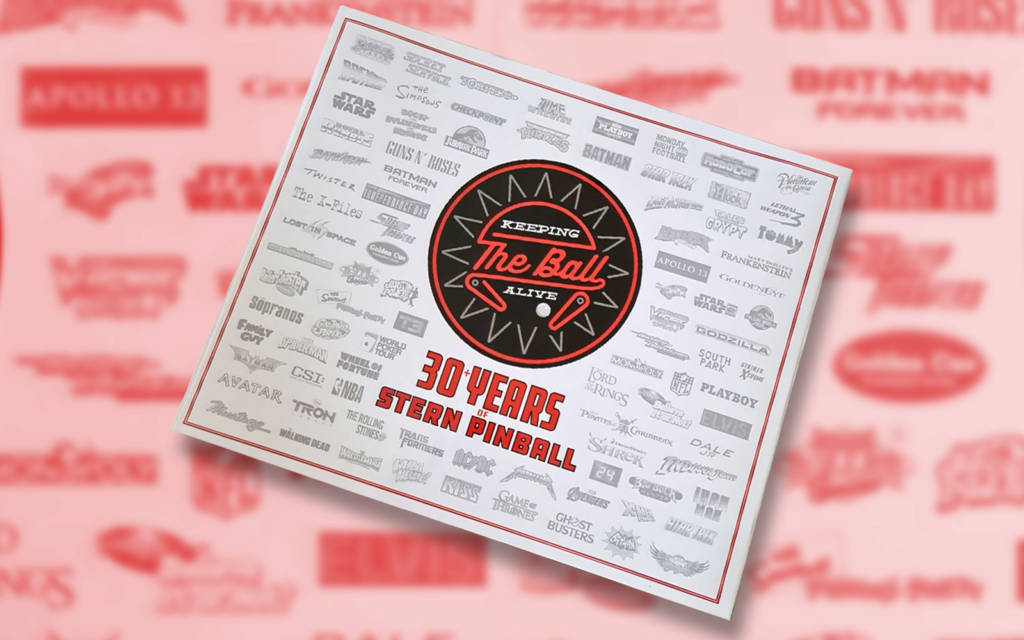 The subtitle has now changed to 30+ years of Stern Pinball

So was it worth the wait?

The package arrived in a standard USPS priority mail cardboard box. Despite the outside being slightly damaged, the book was well protected in bubble wrap & paper and was undamaged. 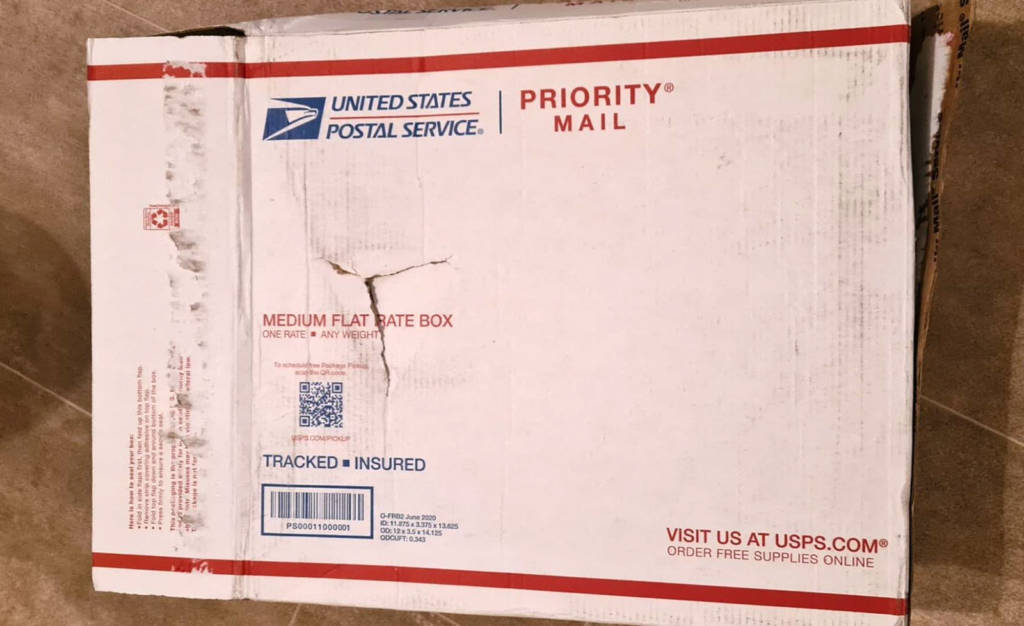 The shipping box for the book 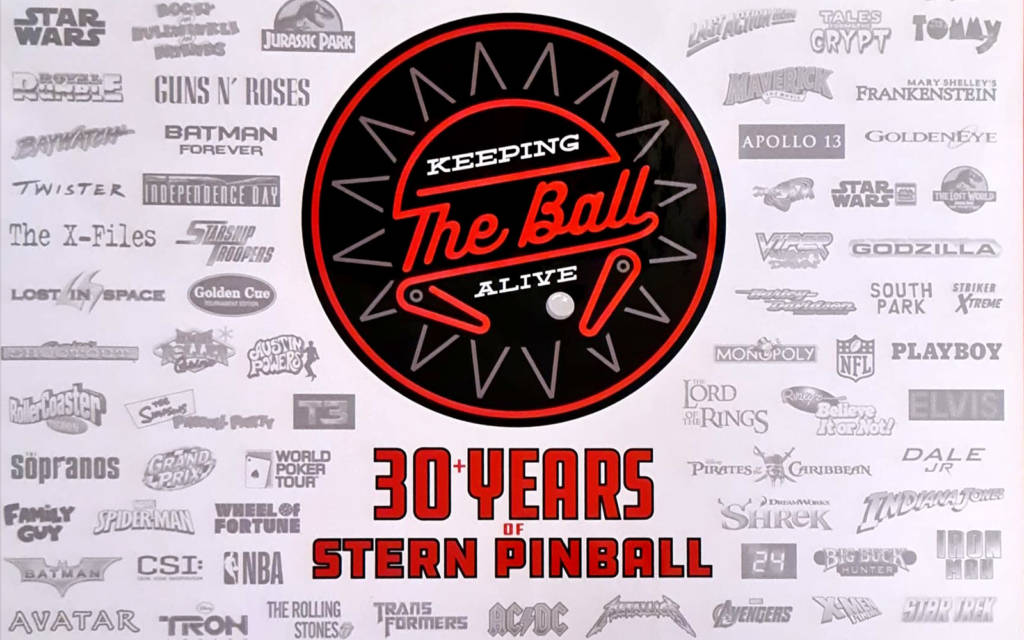 The Keeping the Ball Alive book by Paperflock

Underneath the dust jacket, the front cover is plain black embossed with the same logo. 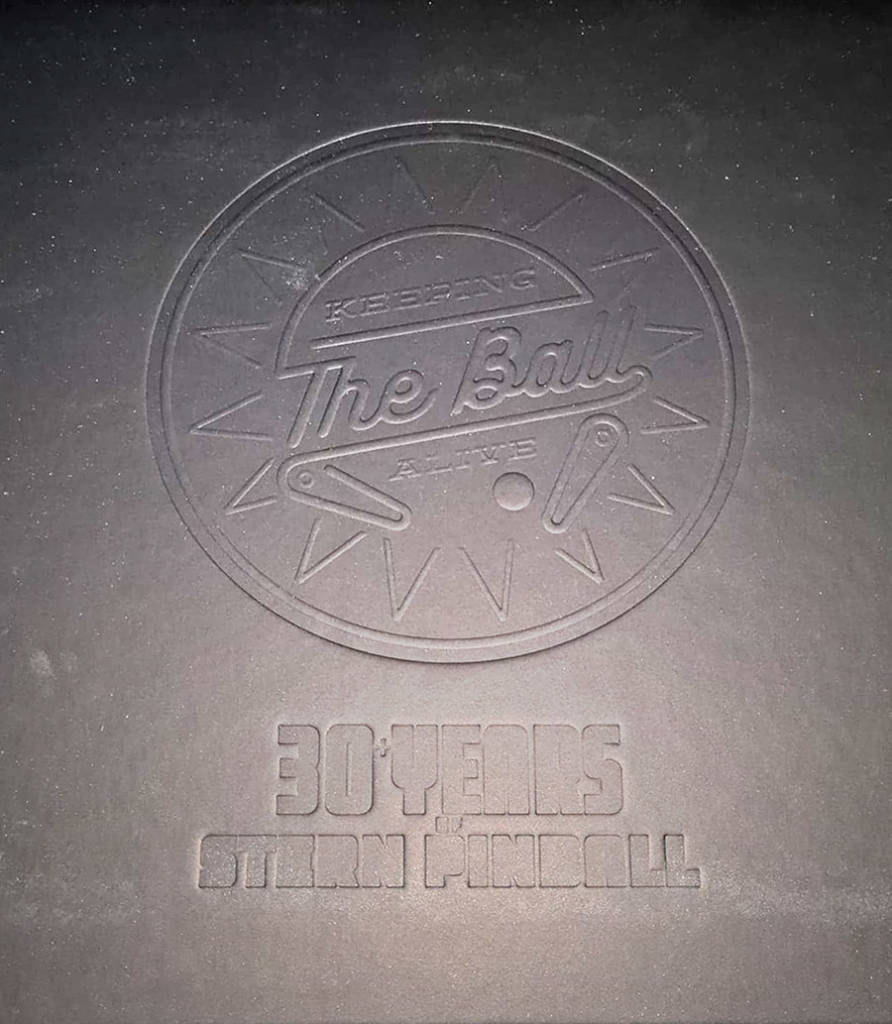 The embossed front cover under the dust jacket

There are 248 high-gloss pages. The printing of all the original artwork and photographs is of a high-quality with good definition. I actually prefer that the older photos show their age and were obviously taken at a time when photography wasn’t as advanced for the general public. They still portray their subjects perfectly.

The content itself is split into three parts. Keeping the ball alive – 30+ Years of Stern Pinball (35 pages) , The Making of a Pinball Machine (57 pages), followed by the machines themselves listed chronologically from 1987-2017 through the different iterations of the company: Data East Pinball, Sega Pinball & finally Stern Pinball (141 pages).

After a foreword by Guns N’ Roses guitarist Slash, who rather ironically has managed to get involved with Stern’s rivals, Jersey Jack Pinball, and create an actual pinball table in the time it has taken Paperflock to produce this book, we move on to the back story of how Data East Pinball came in to existence.

I found this part of the book by far the most interesting and engaging, with various quotes from various Stern insiders and lots of previously unseen pictures and photographs of Stern employees mingling with celebrities, including Gary Stern at the Playboy Mansion – thankfully fully-clothed.

To me this is the biggest wasted opportunity to showcase all the expertise in both design and assembly it takes to manufacture pinball machines in bulk. It comes across as simply page-filler – there are three consecutive photographs of a gloved hand soldering a wire to a switch!

They could have gone into detail of how many miles of wire are in a machine, how long it takes to assemble a machine, how many pop bumpers Stern use a year, the options are almost limitless – and all ignored.

The final section was what I was really looking forward to, detailing every machine made by Data East/Sega/Stern since 1987.

I was expecting pictures of prototype designs, whitewoods, failed experiments, details of the designer, who did the artwork, the music, maybe even some anecdotes specific to the game (e.g. Did you know that the Guinness World Record for marathon pinball playing was achieved on a World Poker Tour lasting over 30 hours?).

We get none of that.

What we get is one or two pages dedicated to each machine with photographs and artwork thrown at it with no proof of thought having gone into it. Almost every machine has multiple pictures of the cabinet from a slightly different angle, but not in close up to be able to see the detail on the backglass.

You do get a ‘Fun Fact’, although the use of both the words ‘Fun’ and ‘Fact’ is open to debate. Here’s an example from Checkpoint. “The game had the first dot matrix display (DMD) ever used on a pinball game! it used a ‘half-height’ DMD as compared to the standard DMD used at the time.” 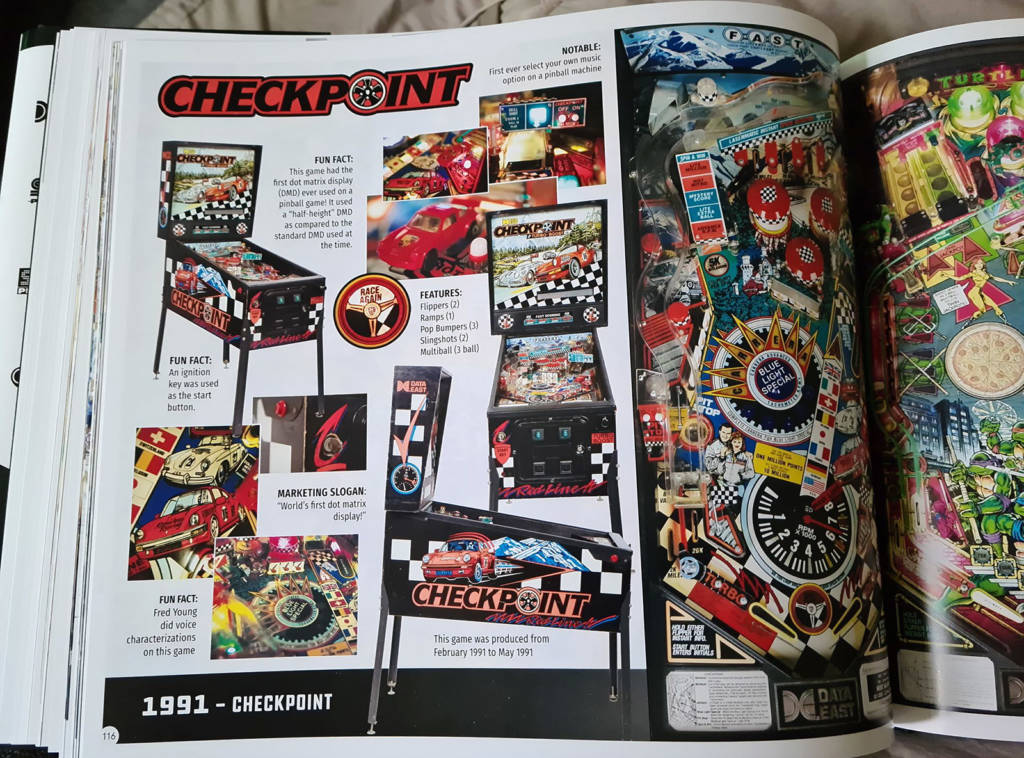 The page for the game Checkpoint

My question is this; If it was the “first ever used” what “standard DMD used at the time” is it half the height of?

The whole book is filled with similar inaccuracies and errors, and they’re just the ones I spotted at first read through without any insider industry knowledge.

Almost every machine does have a ‘Features’ list, consisting of number of flippers, bumpers, ramps, slingshots* and balls in multiballs.
*I have not found a machine detailed which did not have 2 slingshots.

Even in this they manage to get the order different for each machine thus making it hard for a quick-glance reference, and the information is often buried in some obscure, partly hidden part of the page.

I say “almost every machine” as they do not have these listed for the very first machine they document, Laser War, or indeed the next, Secret Service (they both have 2 slingshots). There is no real excuse for this. They have pictures of the machine so could count themselves, or even just use Google.

Throughout the book there are many, many formatting, spelling and grammatical errors. 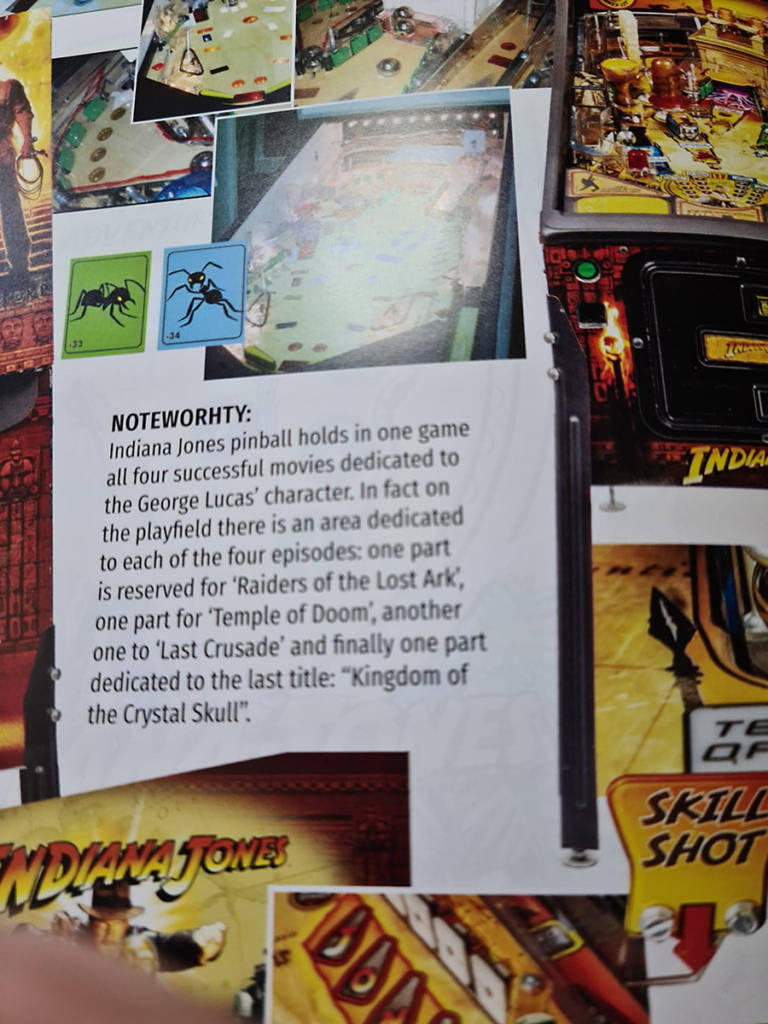 Part of the page for Stern’s Indiana Jones 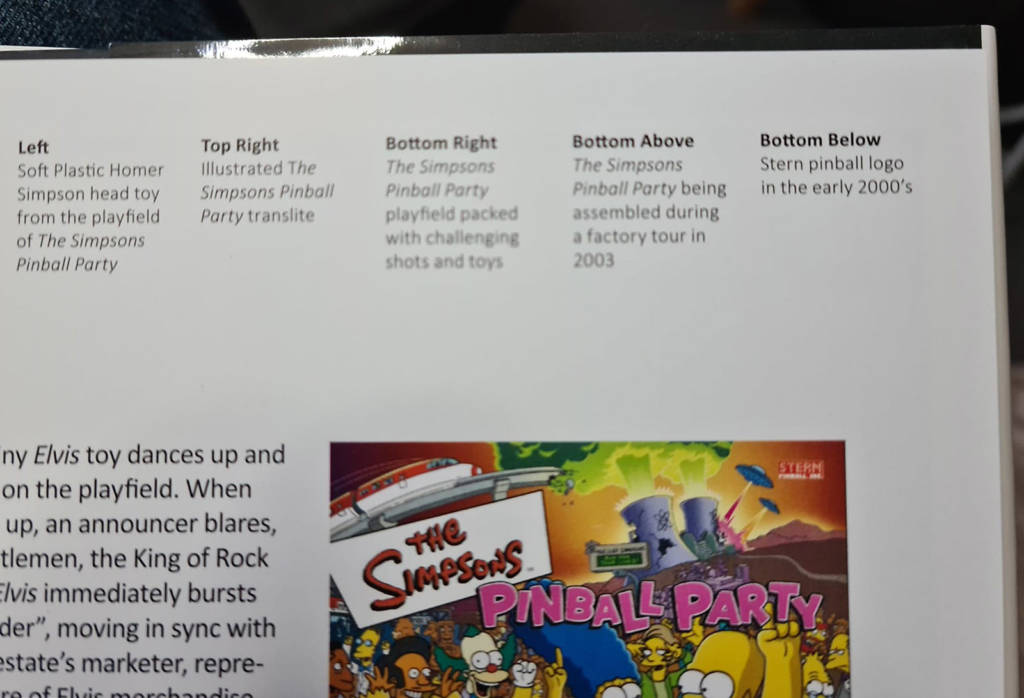 What is “Bottom Above”?

There may well be spelling or grammatical errors in this review (unless Martin has edited them out), but the difference is I am not publishing this in a book and expecting to receive a profit (although any donations would be happily accepted).

Overall, the book is a shambles.

It does have a few interesting points and pictures, but these are almost exclusively in the first chapter.

It seems that after starting this project, and receiving the money, they realised that they were not capable of producing what they had promised and panicked. Rather than admitting defeat they made excuse after excuse before finally giving up all expectation of their ambition and simply wanting to get the project finished by throwing hundreds of photographs at the page without any thought behind it.

If the book became available on Amazon – they have already hinted at another run – I would expect it to sell for a maximum of £25, and even then, not get any more than 3-star reviews.

My biggest regret isn’t backing the project in the first place, but the fact that my name is actually printed in it, so some people may think I actually endorse this book in its current form.