For most vendors and machine donors, Sunday continues the tearing down and packing up which began on Saturday evening. 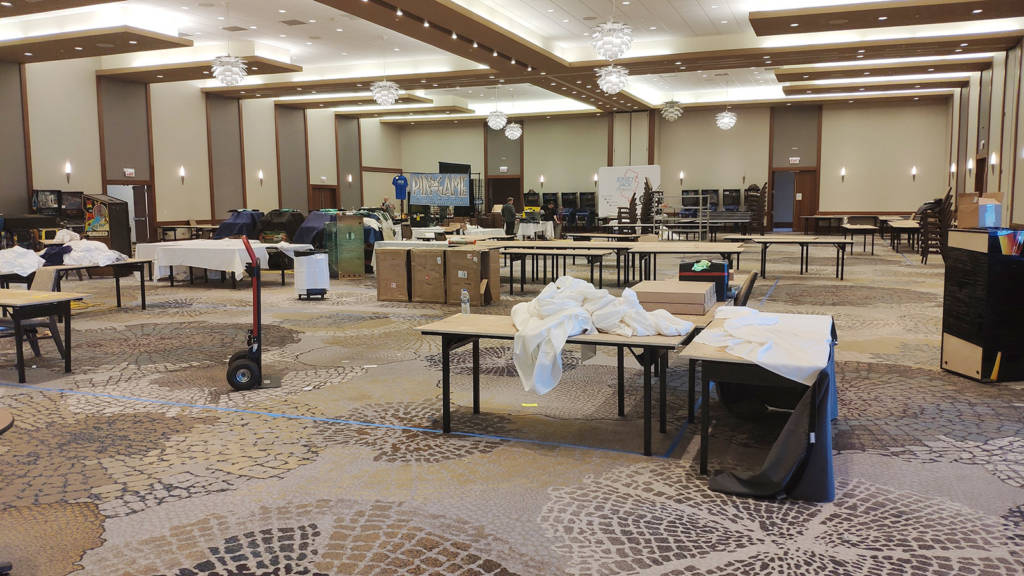 The remains of the displays in the Vendor Hall on Sunday
In the Pin Lounge (a.k.a. the Botanic Garden Ballroom) the end-of-show party continued until 6am, so there was plenty of work still to do on Sunday. 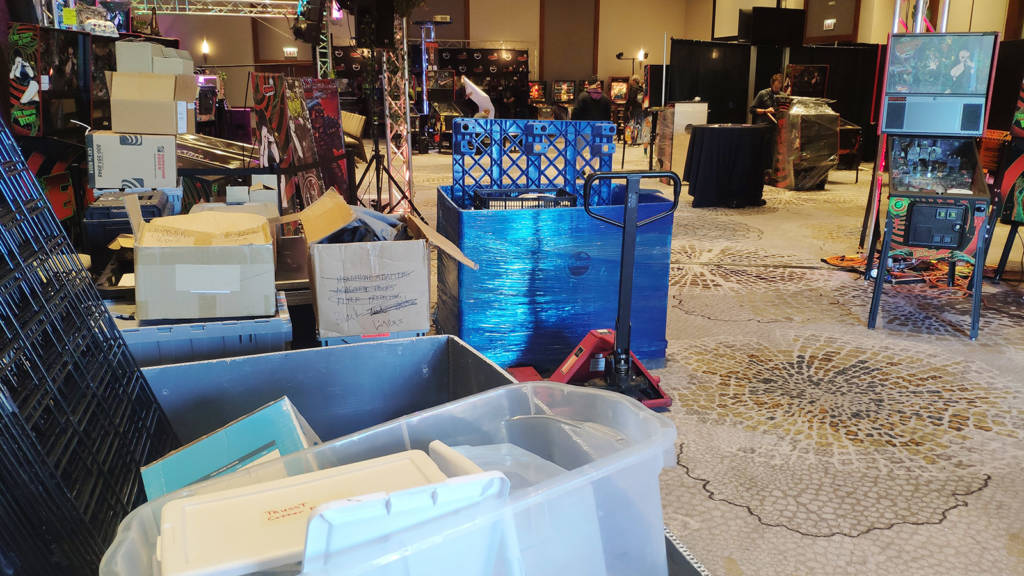 However, there was an extra event taking place in the same part of the room alongside the Classics – the final of the main A Division Flipout Tournament. 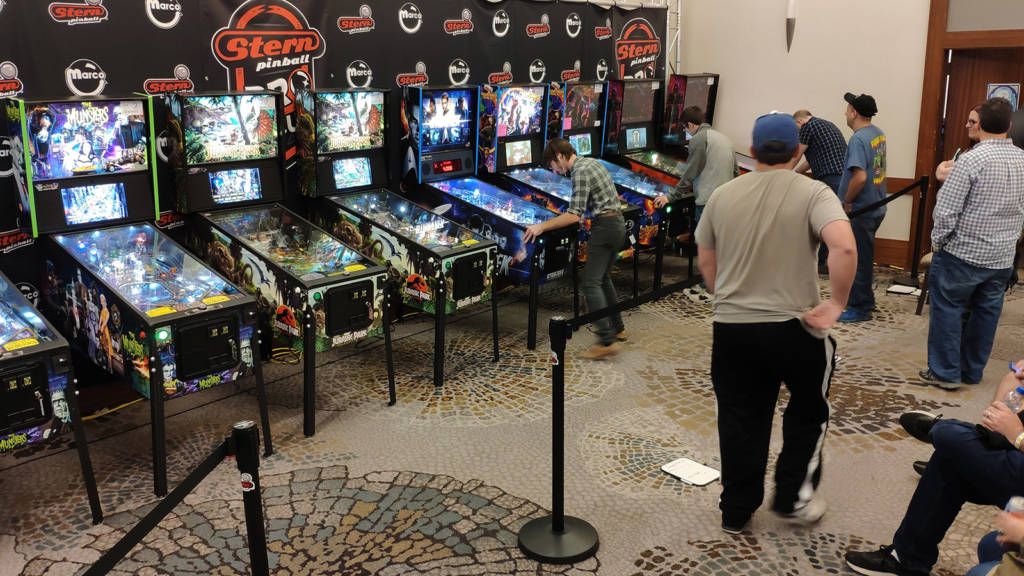 Players had the choice whether to play in the seeding round or not, but would be placed at the bottom of the seeding if they chose not to play. 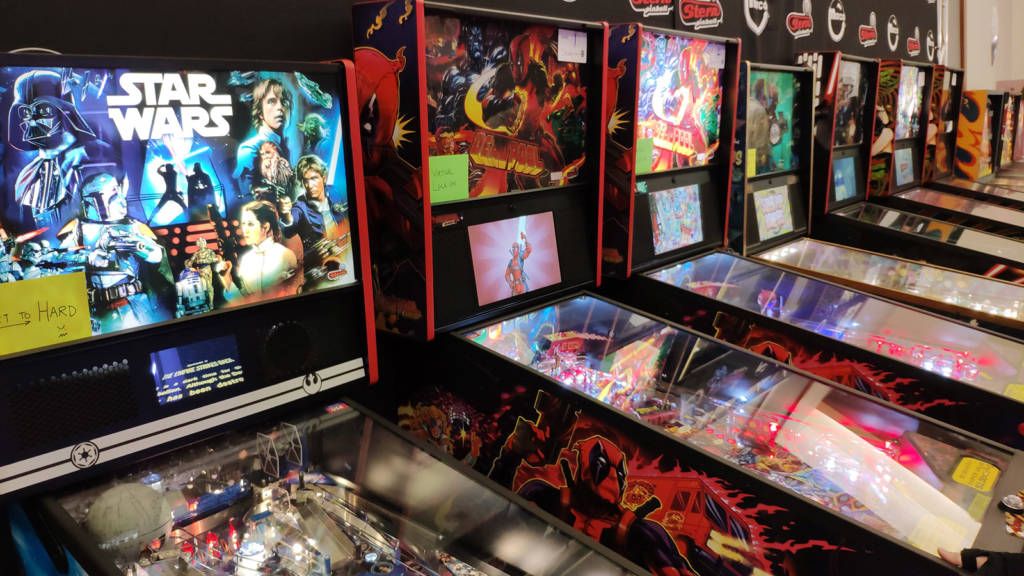 More machines for the Flipout Tournament
When the seeding round finished at 1am on Friday morning, the top 50% of players formed the A Division play-offs, and the bottom 50% went into the B Division. 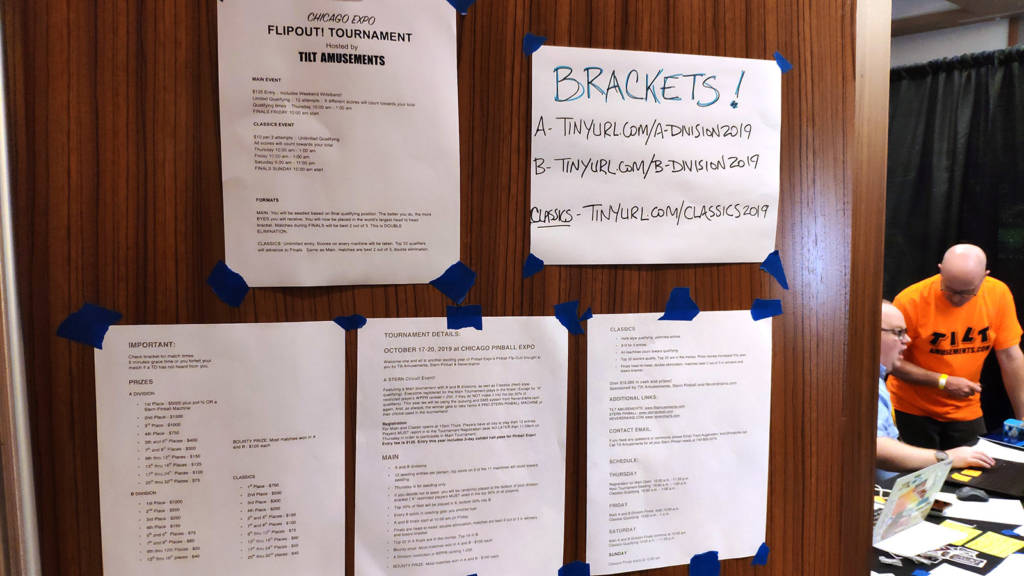 Information for players
Both divisions’ play-offs consisted of double-elimination best-of-three matches, but the higher a player seeded the more rounds they skipped, with the highest qualifiers only coming into the play-offs in round 9. 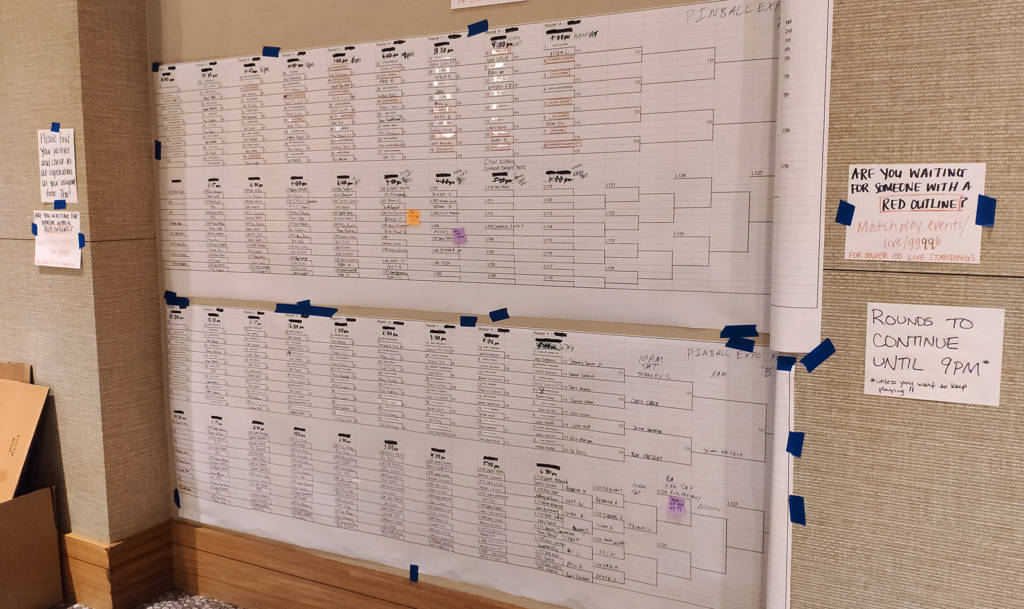 The A and B Divisions
The B Division concluded on Saturday afternoon with a win for Stanley Sowa, Jr. Second place went to Jacob Wolff while John Hegele was third.

That final was between Escher Lefkoff who remained undefeated since joining the play-offs in round 9 where he immediately knocked Keith Elwin into the loser bracket, and Alek Kaczmarczyk who did the same with Cayle George.

Escher and Alek had met in round 11 where Escher had triumphed, but Alek won through the loser bracket to face him again in the final. 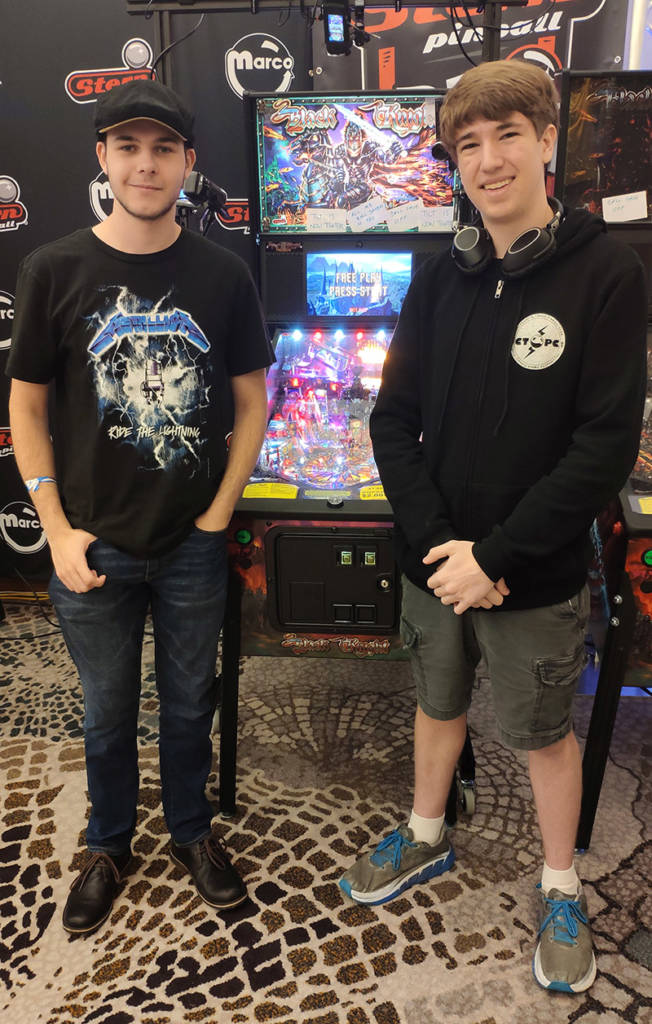 Alek Kaczmarczyk and Escher Lefkoff before the finalThe first game of the best-of-three final was on the Black Knight: Sword of Rage Premium seen above. It was Escher’s choice and he soon showed why he had chosen it, scoring more than 1.3 billion on his first ball thanks to repeated upper playfield orbits. 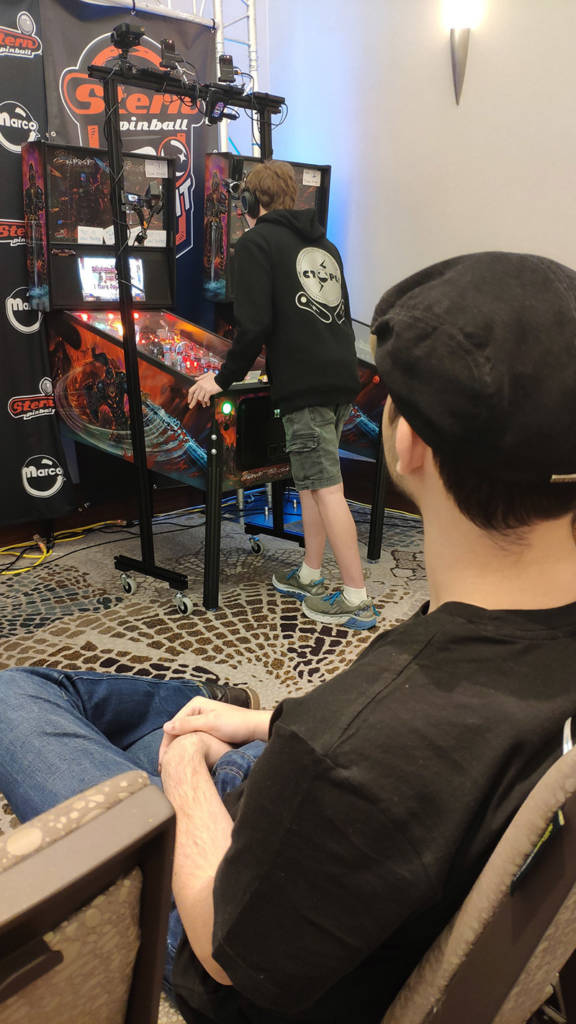 Escher Lefkoff starts the final on Black Knight: Sword of Rage
Alek did well to come back, but ‘only’ managed 444 million on his first ball. Escher upped his score to 1.6 billion on ball two but Alek had a quick drain, only adding a million.

Escher wrapped up the first game by taking his score to 1.9 billion while Alek finished on 472 million following a second quick ball.

Game two of three was on Jurassic Park, and this time it was Alek playing first. It was a different game, but his luck from Black Knight continued, as his first ball drained quickly with no ball save for less than half a million. Escher only did slightly better on his first ball, scoring just over one million.

Alek’s second ball was quick too, but at least he scored the two million skill shot to end on 3.2 million. Escher did the same and hooked up some more shots for 10 million.

Alek’s third ball was a copy of his second, and his 7.3 million total meant game two and the final went to Escher. 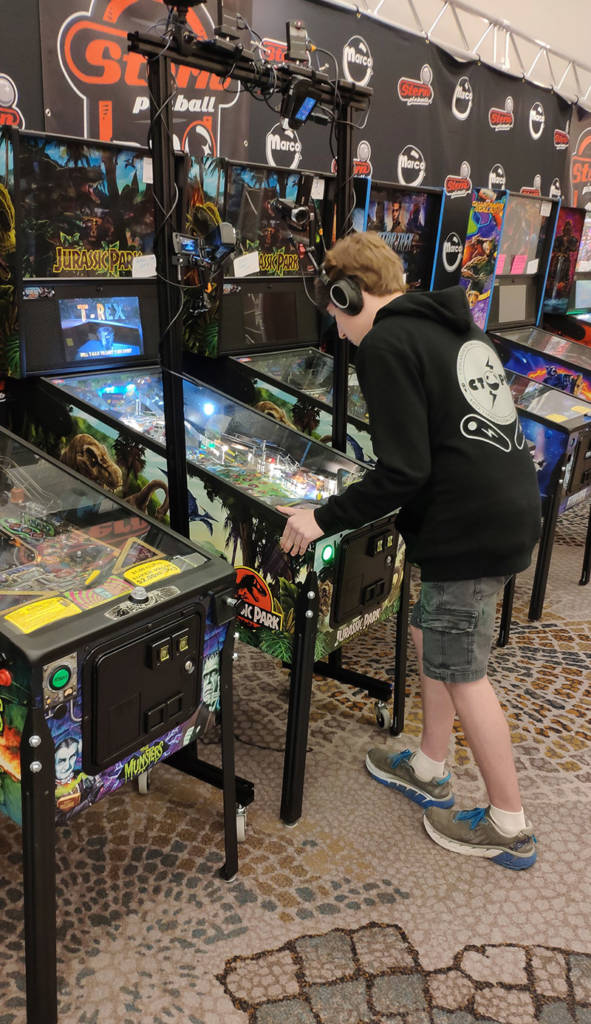 Escher wins the final on Jurassic Park
So, Escher was first, Alek was second and Colin Urban was third. 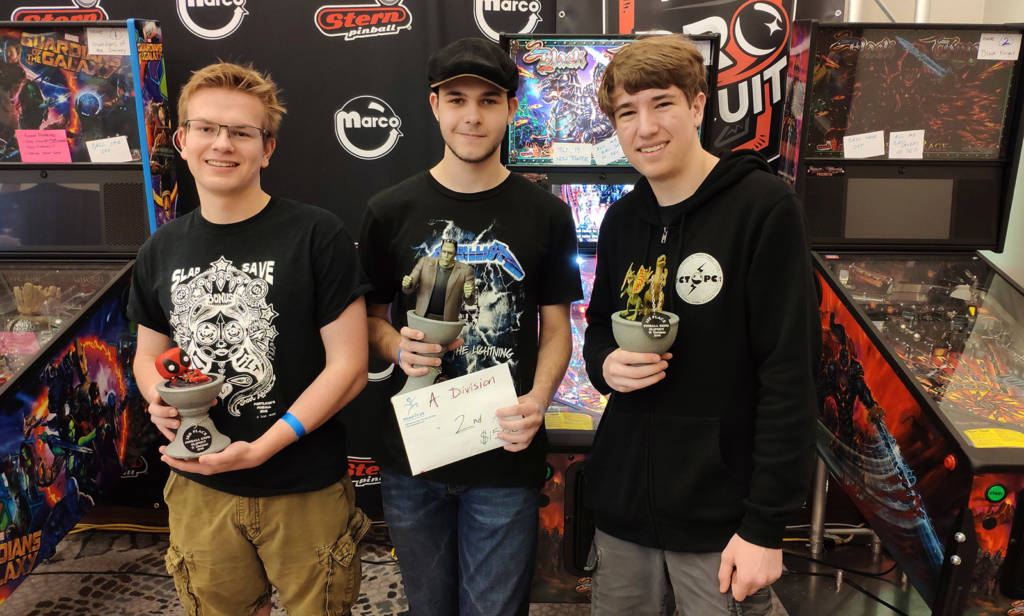 Meanwhile, the Classics Tournament play-offs were taking place on the other side of the hall.