We reported earlier this month on the announcement from Spooky Pinball that their next title would be Rick and Morty. Now they have revealed pictures and video of the game and all 750 machines sold out within hours of pre-orders becoming available.

There are two versions, the regular and the Blood Sucker Edition, priced at $6,995 and $7,520 respectively. 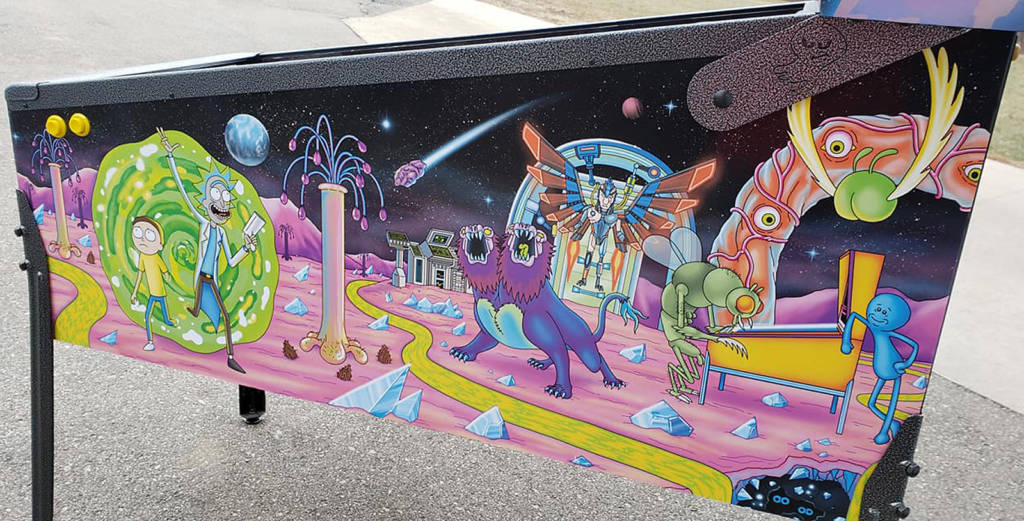 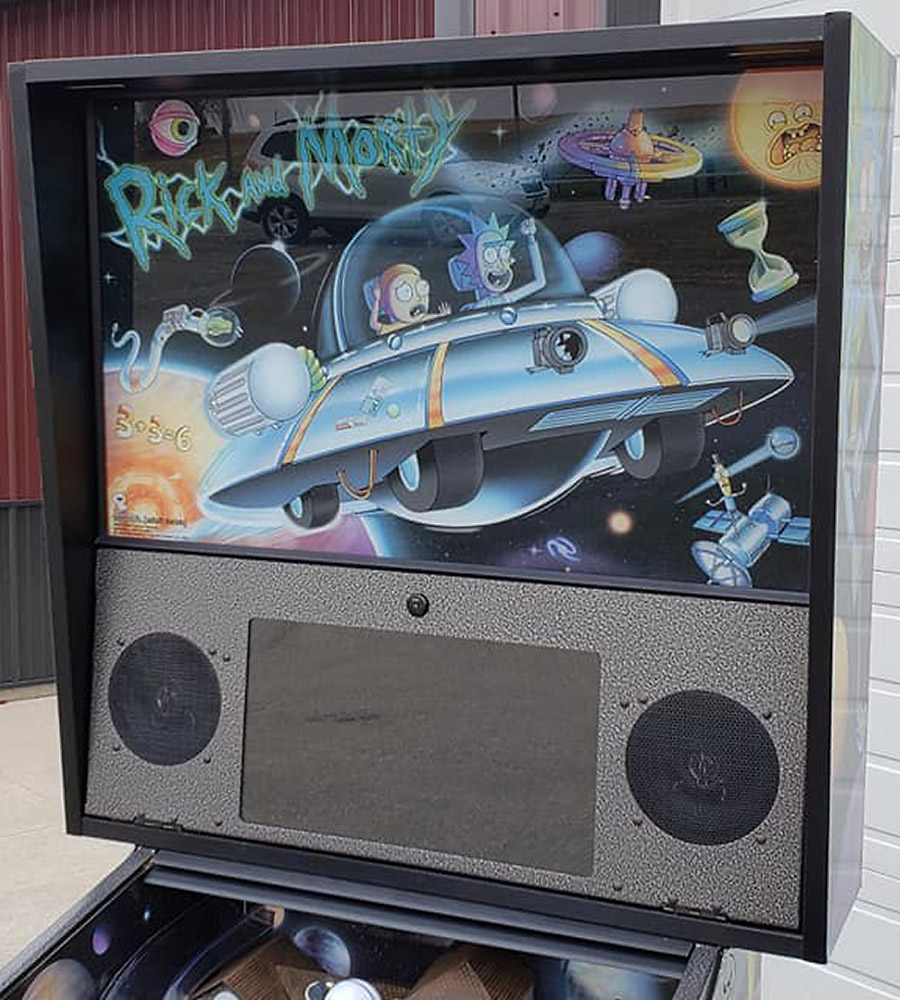 Perhaps most importantly, paying the $525 extra for the Blood Sucker Edition ensures your game is built and shipped before any of the regular models. The cabinet, backbox, translite and playfield artwork remains the same across both models. 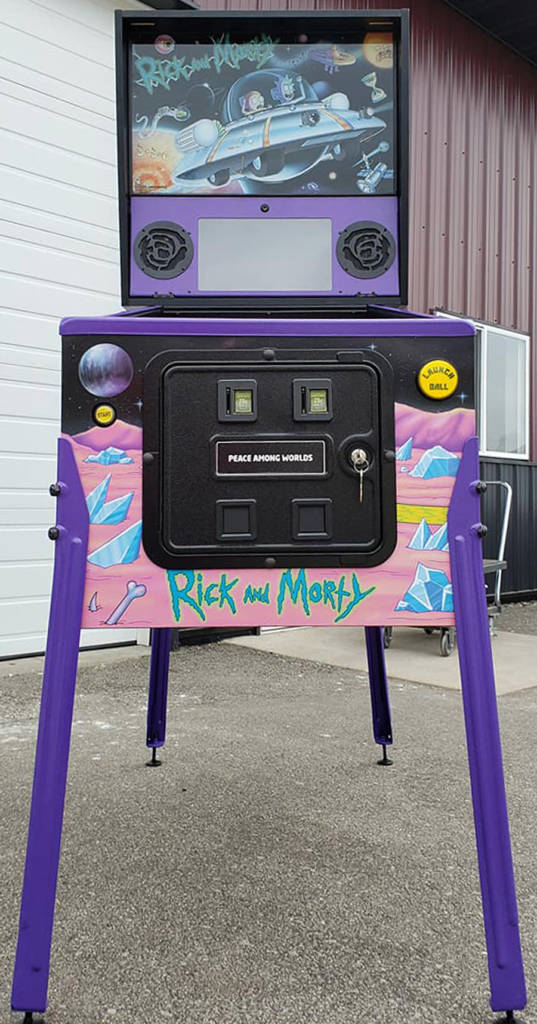 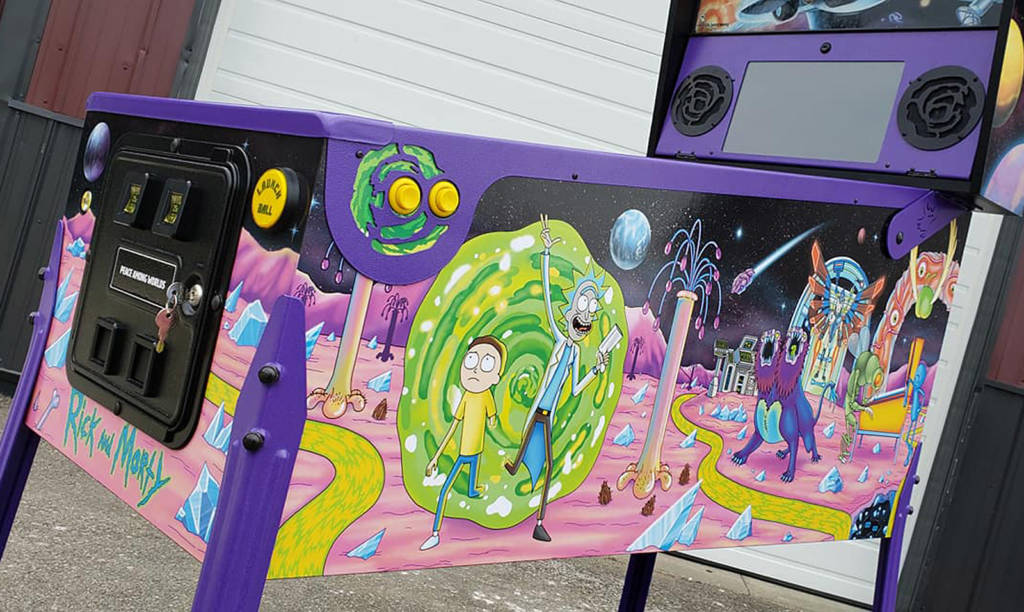 The purple trim on the Blood Sucker Edition 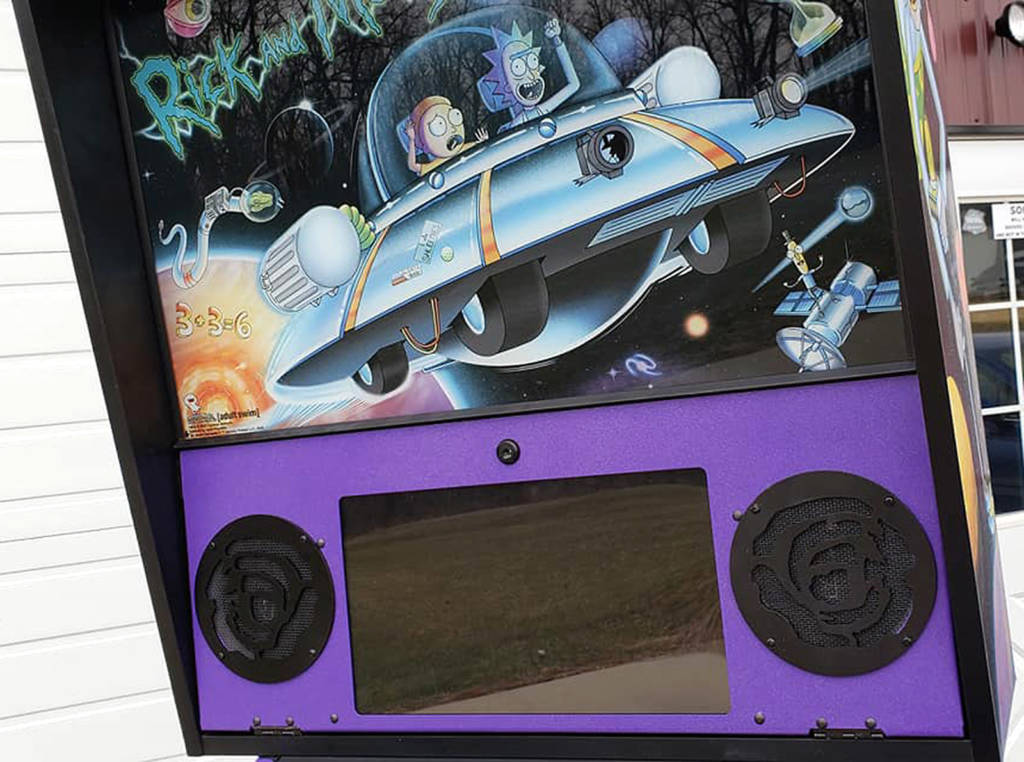 Rick and Morty is a P3-ROC-driven three-flippered game – two flippers in the usual place at the bottom and a third half-way up on the right-hand side. The upper flipper is positioned at a transition in the playfield’s artwork from planetary purples and yellows to the black of outer space. 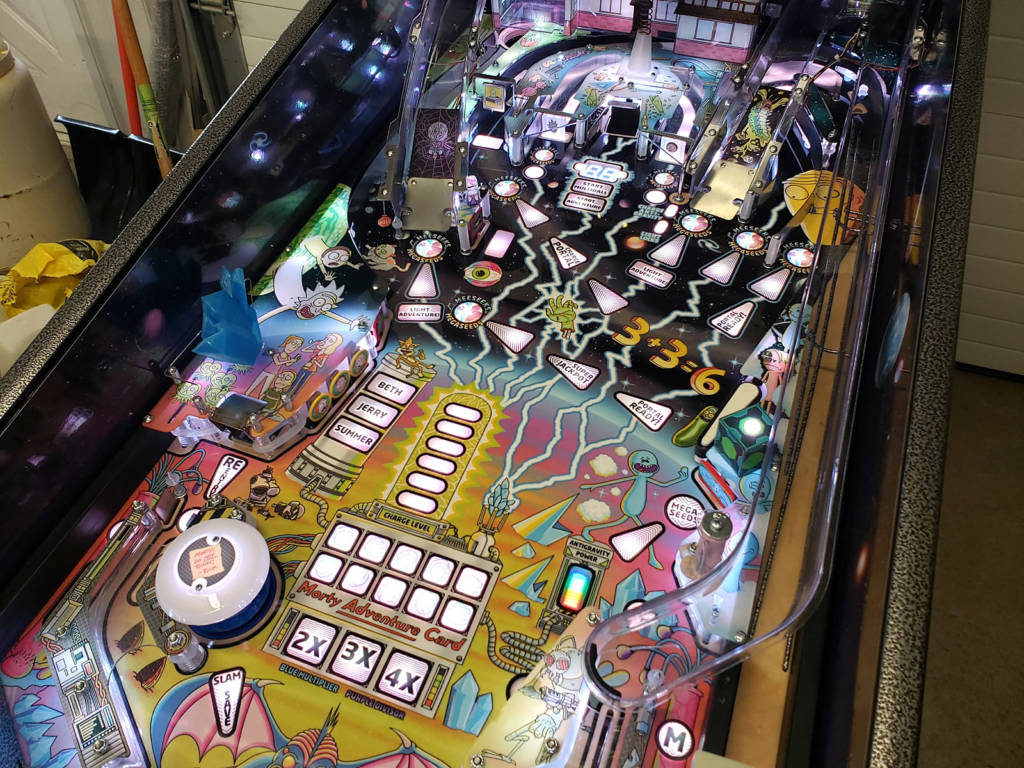 The Rick and Morty playfield

It contains two ramps which both feed to the right side of the game. The left ramp send the ball to the upper flipper, while the right ramp feeds it into the inlane on the same side.

The horseshoe lane with the addition of illuminated, frosted drop targets at either end and an up-post at the back to create the Danesi Lock 2.0 – a development of the inline drop target locks used in Scott’s earlier design, Total Nuclear Annihilation. 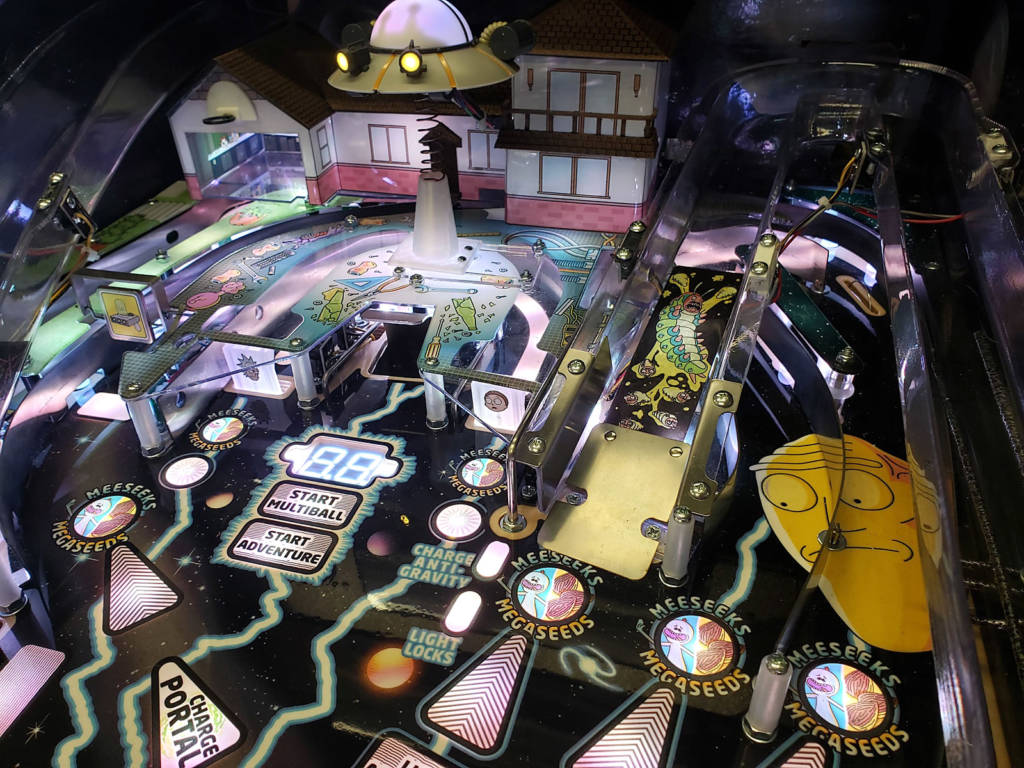 The upper half of the playfield 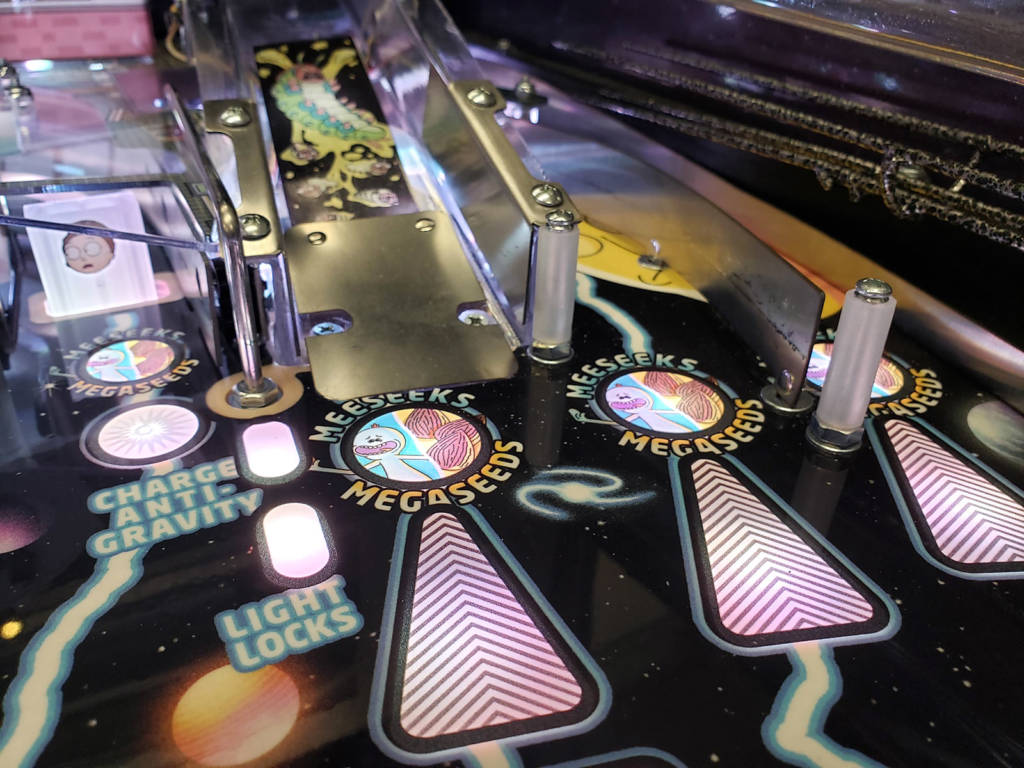 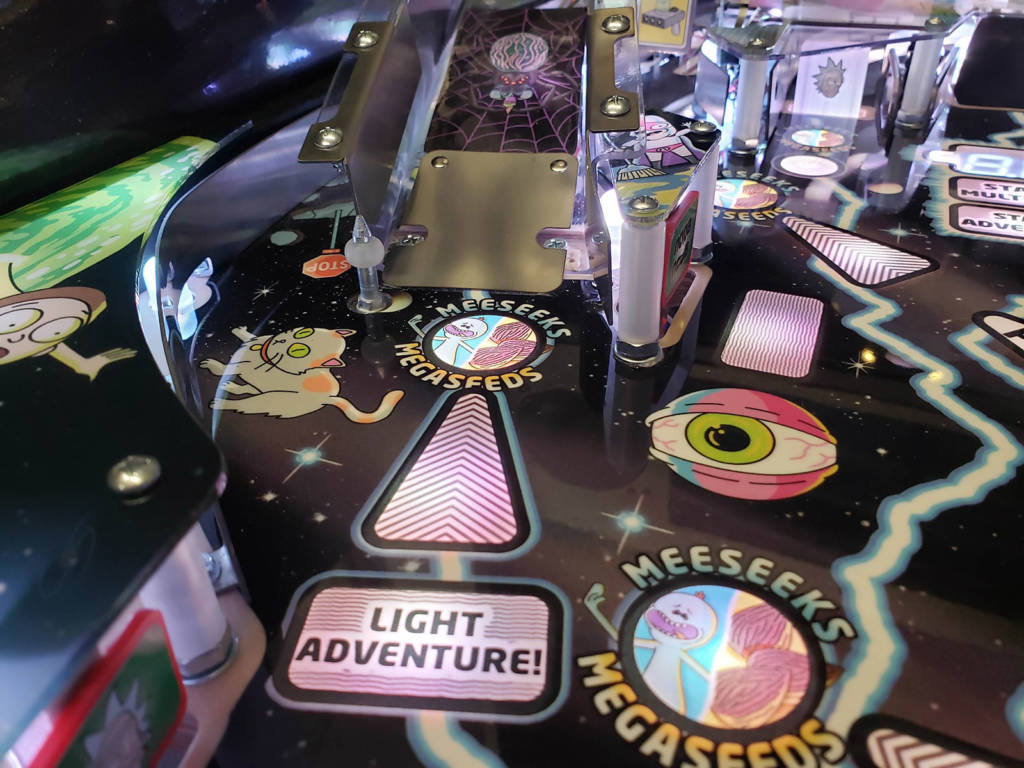 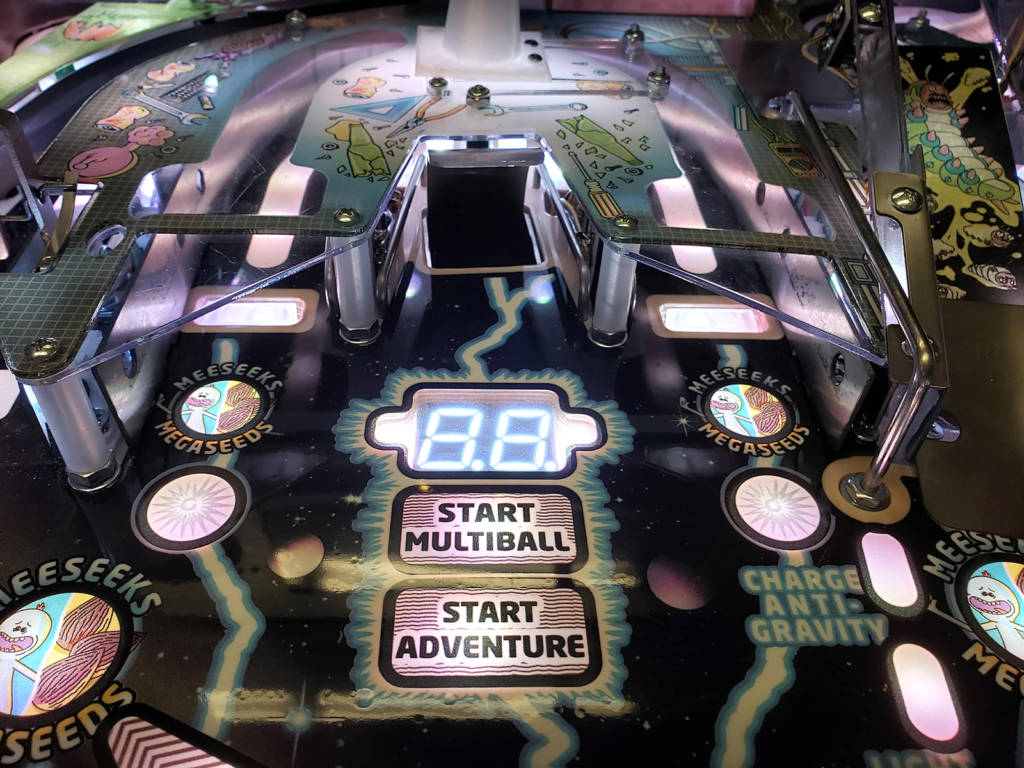 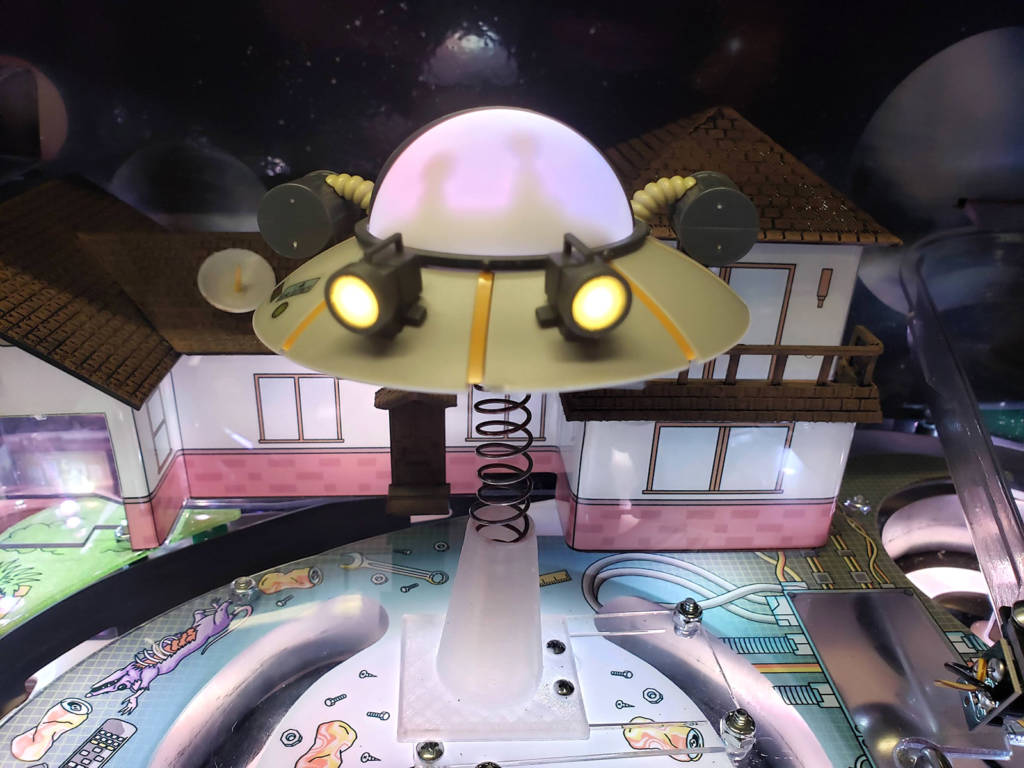 There is a sinkhole at the back-left corner, accessed from the upper flipper. This uses an under-playfield tunnel to feed to a kickout scoop which fires the ball into the left inlane. 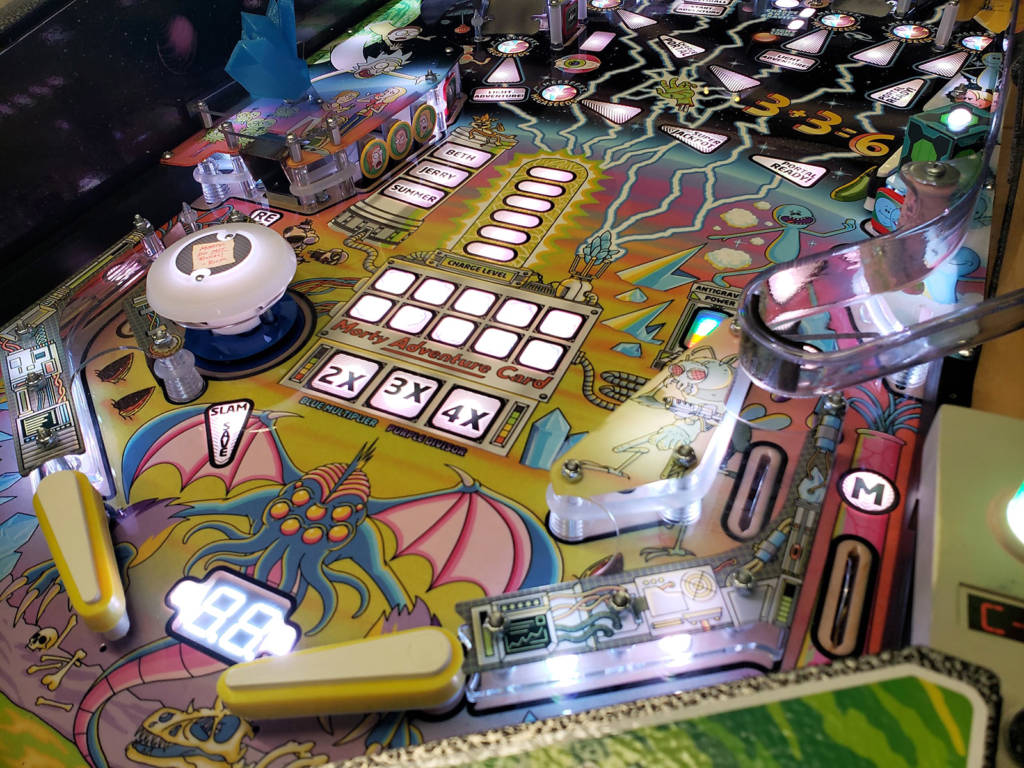 The lower part of the playfield

Where we would normally find the left slingshot, Scott has put the game’s only pop bumper. 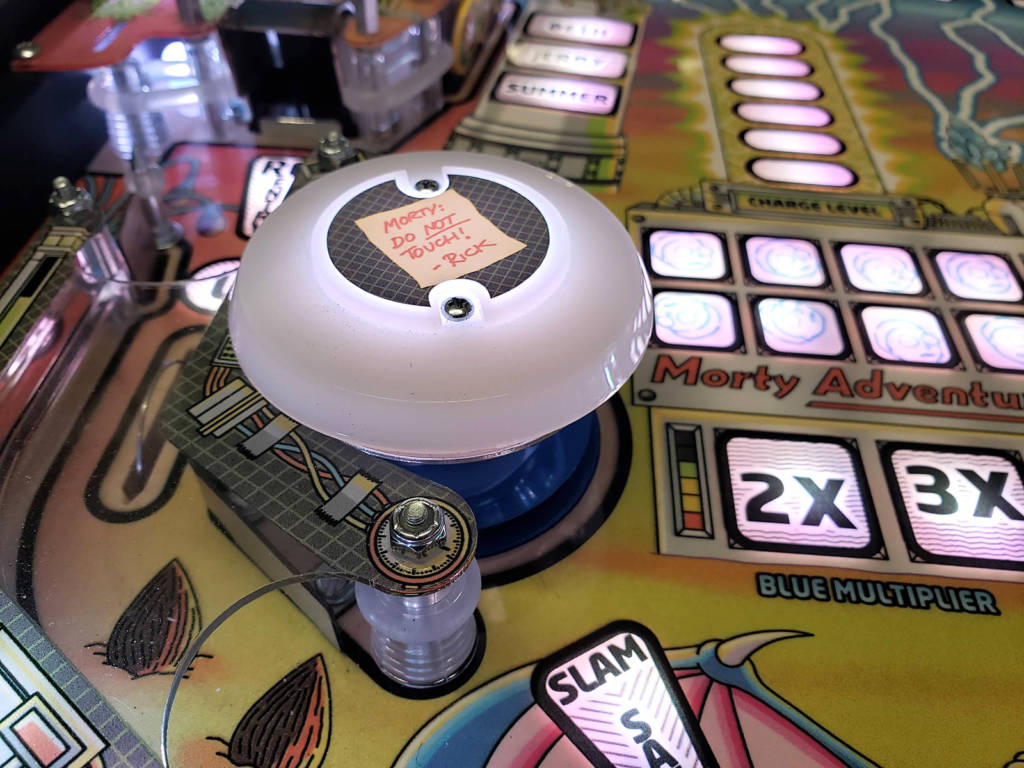 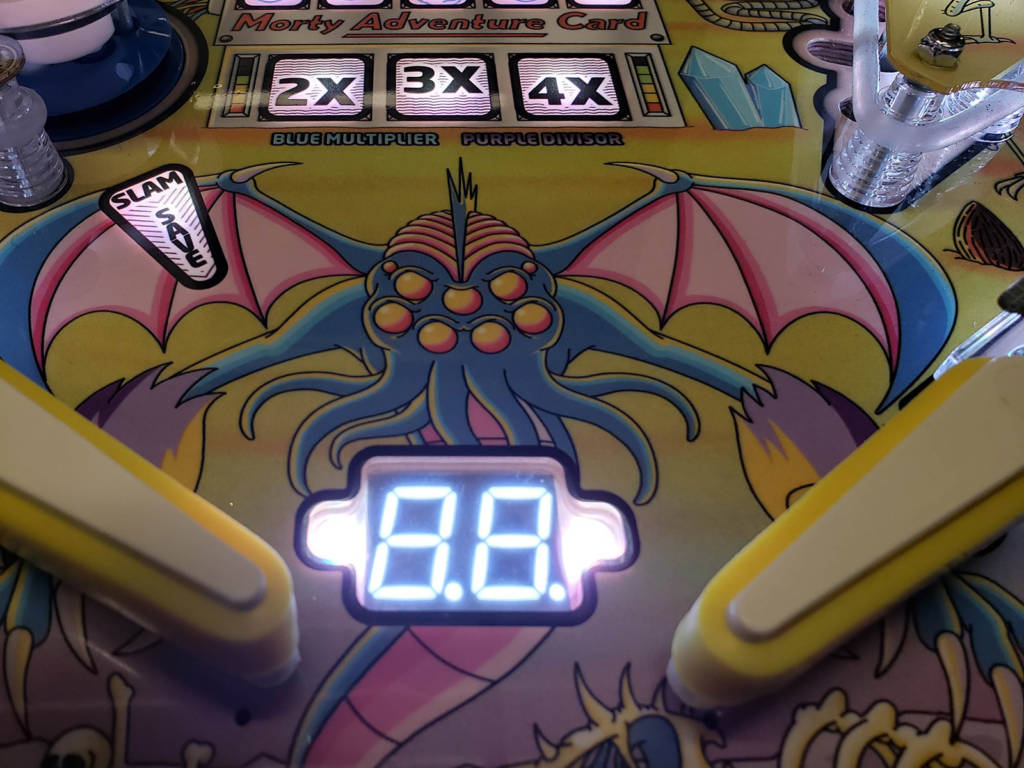 Rick and Morty features a second flipper button on the right side of the cabinet. This is to activate the Anti-Gravity Field magnet above the right inlane. It needs to be charged first though, which is done by hitting the wireform next to the right ramp. 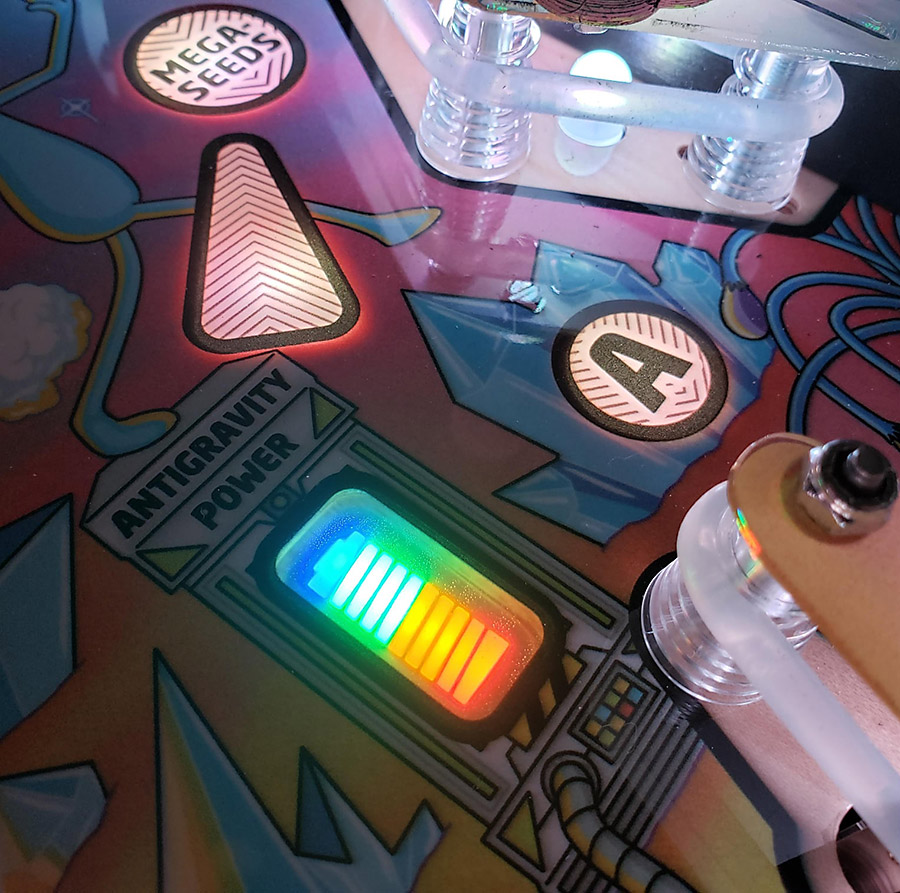 You can see most of the playfield features in this picture of the bottom side.

The reverse of the playfield

Spooky Pinball released a video where Charlie Emery explains the various features in the game and the changes they have made to the platform since their previous games.


You can see a list of features on the game’s flyer, which is pretty-much redundant now that all the 750 games have been sold. Here it is anyway. 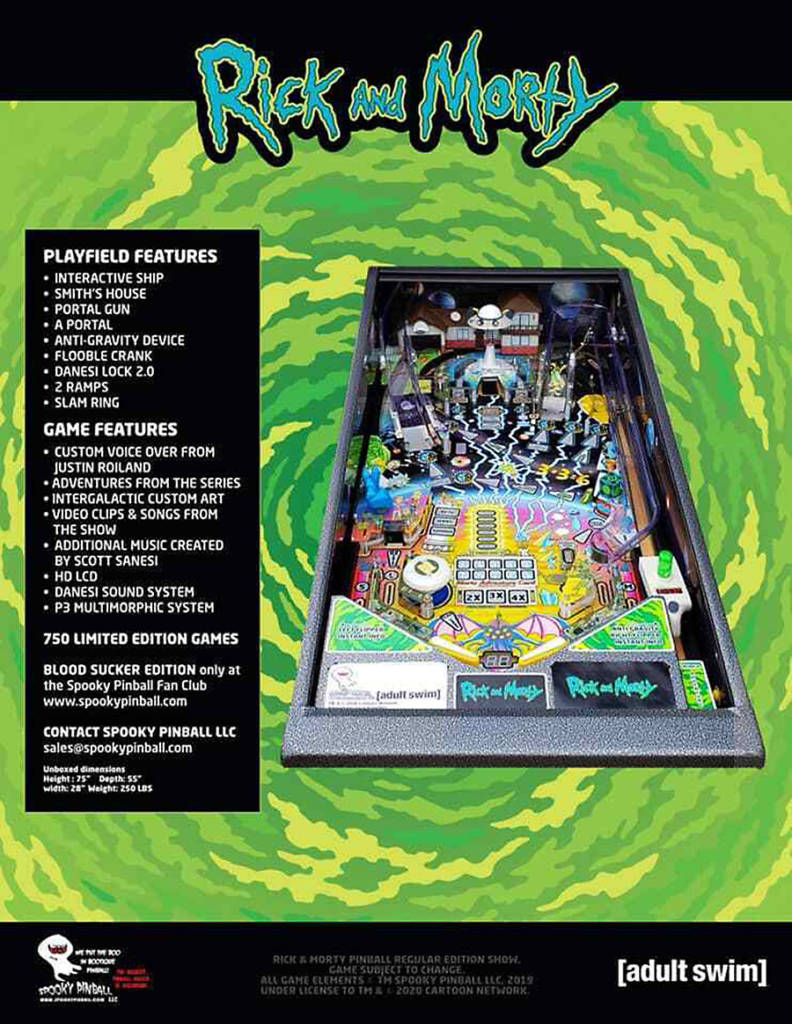 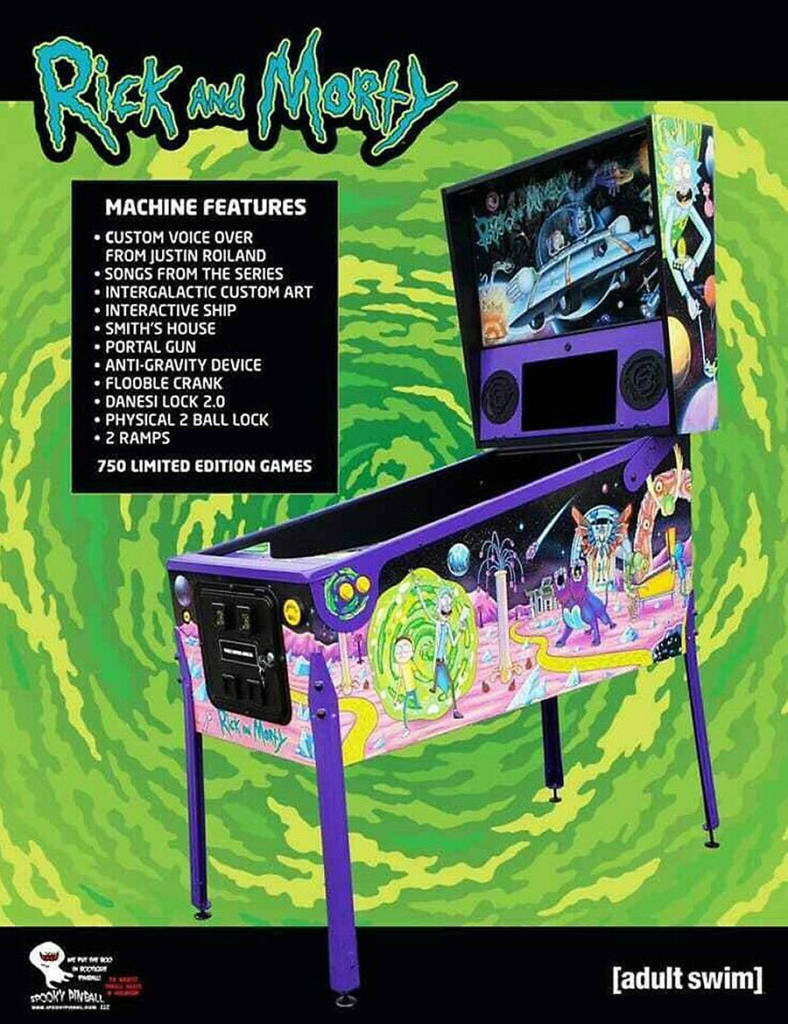 Various add-ons and mod will be available for both version of Rick and Morty, including lighted speaker cutouts, high-gloss direct-to-wood printed cabinets, target decals, a knocker mechanism, a shaker motor, plastic protectors, interior cabinet graphics, bill-acceptor-ready door, and a coin box with a lid.

That’s all for this reveal of Rick and Morty from Spooky Pinball. We’ll be back with more details when we get our hands on one at the Texas Pinball Festival in March (if not sooner), and you can find out more about the game (and be put on a wait list to buy it should any purchasers drop out) at the Spooky Pinball website.

In addition, if you want to be in with the chance of winning a Rick and Morty pinball, join the Project Pinball raffle and help support a really good cause at the same time.