Attack From Mars is often included in many top 5 lists for the best tables of all time. It was so popular that the Chicago Gaming Company created a remake of it in 2017. This posting updates Slamt1lt's version of the table that he released in 2014. It benefits tremendously from the addition of dynamic flippers, more so than any table I have tried lately. You can aim and control the ball much better than in the past. Proof is the dreaded center shots that are easy to do without sacrificing...
Click to expand...

Read more about this resource...
J

Hi GeorgeH,
Mate I have played this table many times. It is one the greatest tables ever produced.
I am not certain how many will realise or appreciate how much work you have done to this table, as always your attention to detail is off the charts.
Perfect game play, lighting and everything else, AWESOME!!!

Staff member
Site Supporters
Thanks guys. I put a lot of work into it. I completely rethought the settings for the lighting that I have used on other tables. The original ramps seemed to be OK at first but then I noticed the ball hit objects that it shouldn't on the left ramp. I ended up rebuilding both ramps so they work correctly now. This is my favorite table so I decided to make it the best it can be.

Hi George,
Mate just curios why did you called the table the Slamt1lt's version when there are so many other contributors.
Let's not forget the table creators. Slamt1lt is mainly a table modder like us, just better at it.
Yes, I am a huge fan of his work, he is why I decided FP was for me and I try to emulate his idea's. I wish I had his talent!
But how many original tables has he created and shared, cheers!

Staff member
Site Supporters
Slam was the last to mod it before me. Maybe I should remove it.

Slam is the man, there is no doubt!
But if someone else posted a GeorgeH or NitroNimbus title in the same context I could see why a table creator/s would be upset.
I am certain you don't want to take credit for table authors work with a mod and niether do I, cheers!

Staff member
Site Supporters
@GeorgeH,
Just a note that I decided to unfeature your "SLAM's Phantom of the Opera" and feature this one in it's place.

Hmm. Some of the other featured tables are probably getting a little long in the tooth, and it might be an idea to similarly update them.

@NitroNimbus,
That reminds me that we don't have one of your mods currently featured. Is there one you especially like or one in which you're extra happy with your update work?

Hi Ike,
Thanks mate appreciate the offer.
Yep! If I make it to "P" it would be my version of Pink Floyd.
Still needs a lot of work but I really like playing this one, personal choice because it's also my favorite band, cheers!

Love this table! SlamT1lt was the ultimate creator so his name is mentioned. I see no harm in that you can see the old authors in the script.

NitroNimbus said:
Hi Ike,
Thanks mate appreciate the offer.
Yep! If I make it to "P" it would be my version of Pink Floyd.
Still needs a lot of work but I really like playing this one, personal choice because it's also my favorite band, cheers!
Click to expand...

I will have to check it out if you want me to debug for you I can when i get some time.

Starting to write a illustrated guide for this table with all the rules for scoring and multi-ball.
Start of it is here 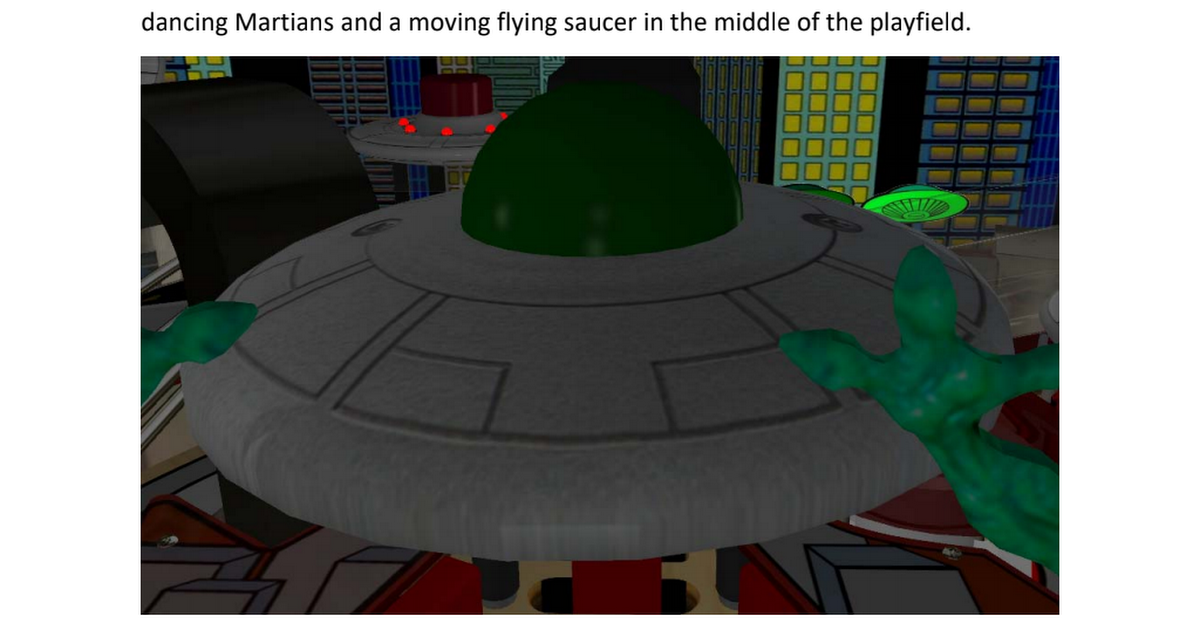 These are official rules from rom setting of default scoring differs depending on difficulty setting and this table may not score the same exact way as the default factory settings so use the guide for completing objectives rather than relying on it to match scoring on the table.
Most likely will take scoring out of my document as that can vary from table settings and in VP can be anything the table designers want.
Last edited: Nov 13, 2020

Read the rest of this update entry...

Staff member
Site Supporters
Just an observation-- when users are looking through tables by title, this one won't appear amongst the other "A" tables, nor next to the other "Attack from Mars" tables, specifically. Instead, as currently named, it will show up in the "S's," for obvious reasons.

One way to remedy that would be to include the "Slamt1lt" text after the table name. Tags could also be used. Again, just some observations.
Last edited: Nov 16, 2020

going through the script now only thing I found so far is maximum scoring for a jackpot should be 250 million not 1 billion.

I love how some on VP forums poo poo FP. No creation of AFM compares to this version sound wise or visually. I find allot of VP tables are way oversaturated in lighting especially reds.

jamosb said:
I love how some on VP forums poo poo FP. No creation of AFM compares to this version sound wise or visually. I find allot of VP tables are way oversaturated in lighting especially reds.
Click to expand...

Sounds pretty typical of the scene. I've also seen my share of pooh-poohing when it came to original tables for older VP versions. Some of the members seemed borderline-outraged at the idea that there was value in anything other than the latest VPX and the latest tables.

Still, when it comes to FP, it seems to me that both the Wikipedia entry and common perception have done a lot of damage to FP's reputation. It's almost as if BAM never got created, and all the cool features available through the project (some of which seem to trump VPX's abilities) don't actually exist.