SS BILLIARDS: AFTER THE REFRESH

SS Billiards is synonymously linked with its owner; The Man, The Myth, The Lloyd.

Back in August of 2002, Pinball News (PBN) brought you an article about a mostly pinball and pool arcade, SS Billiards, located near Minneapolis, MN, in the United States. The arcade is eponymously known as, Lloyd’s. Lloyd is the arcade’s owner, but you may know Lloyd by his metonym, LTG.

Then, back in 2014, we brought you an introduction to the owner; The Man, The Myth, The Lloyd.

At the end of last year, we posted a YouTube video of Lloyd. Lloyd even has his own YouTube Channel. This got us thinking. Maybe it was time to catch up with Lloyd and specifically see how things are going after the refresh.

So, we did just that.

We found Lloyd, as always, freely dispensing pinball advice from his lifetime of wisdom. For those of you seeking Lloyd’s pinball advice but can’t stop into SS Billiards, Lloyd can easily be found on two message boards, on telephone support lines, and through e-mail and Facebook.

We did not contact Lloyd through social media, however. Instead we visited West Brooke Square and spoke with the man himself. 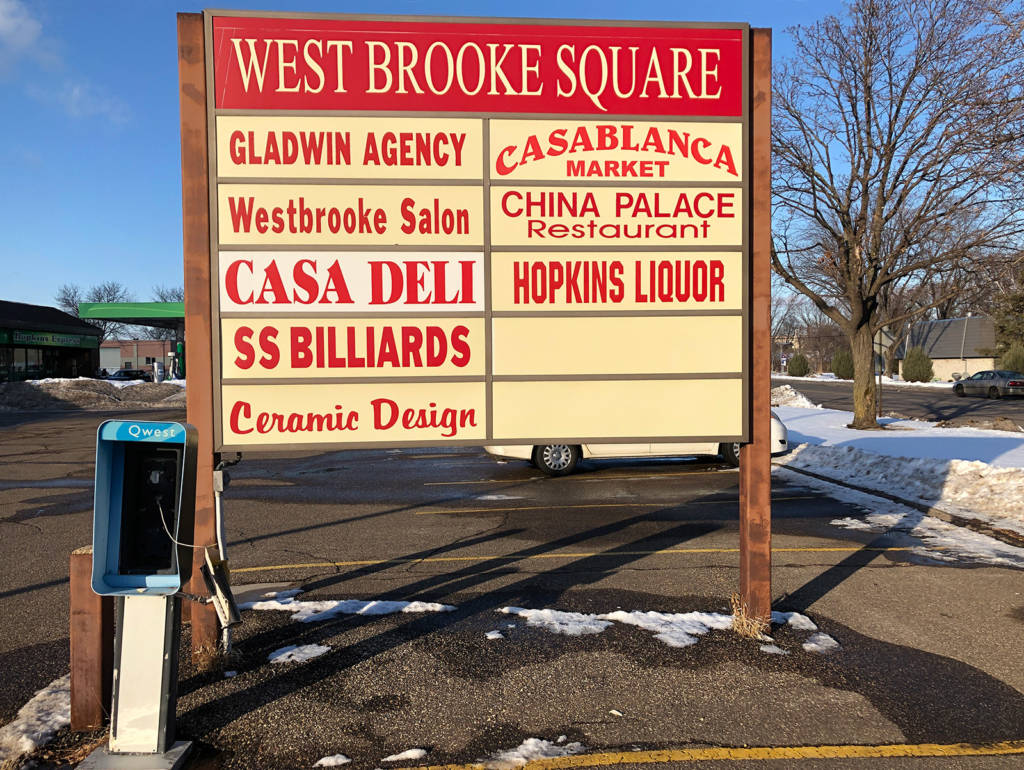 We were only interested in visiting one shop – SS Billiards

When we got to Lloyd’s to do our interview, we were happily greeted at the door by Lloyd’s dog (and arcade mascot), Prada. 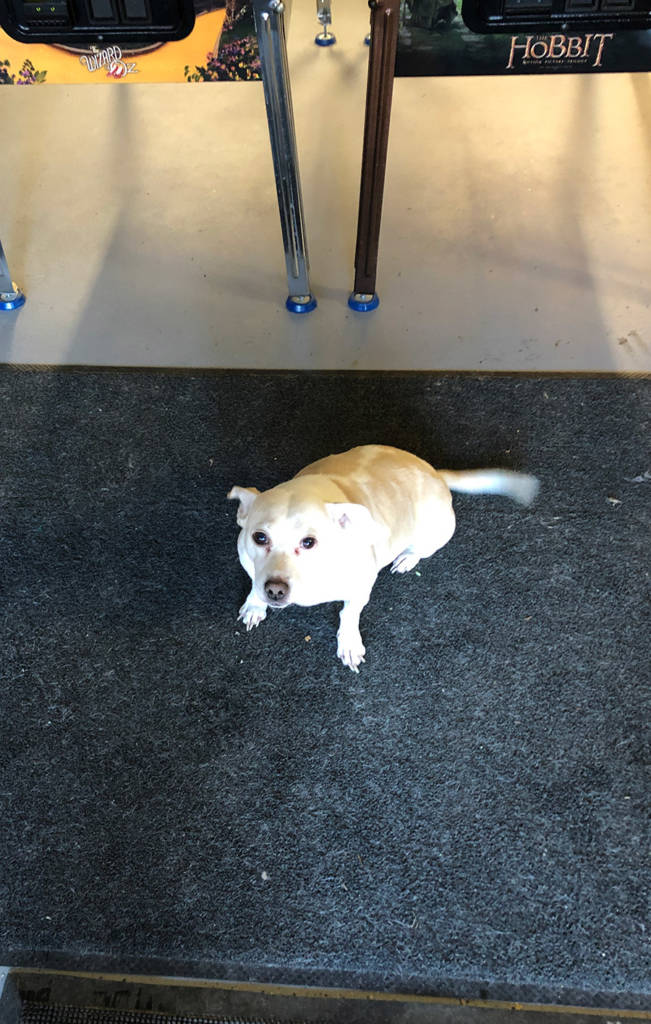 Next, we met with the legend – LTG. 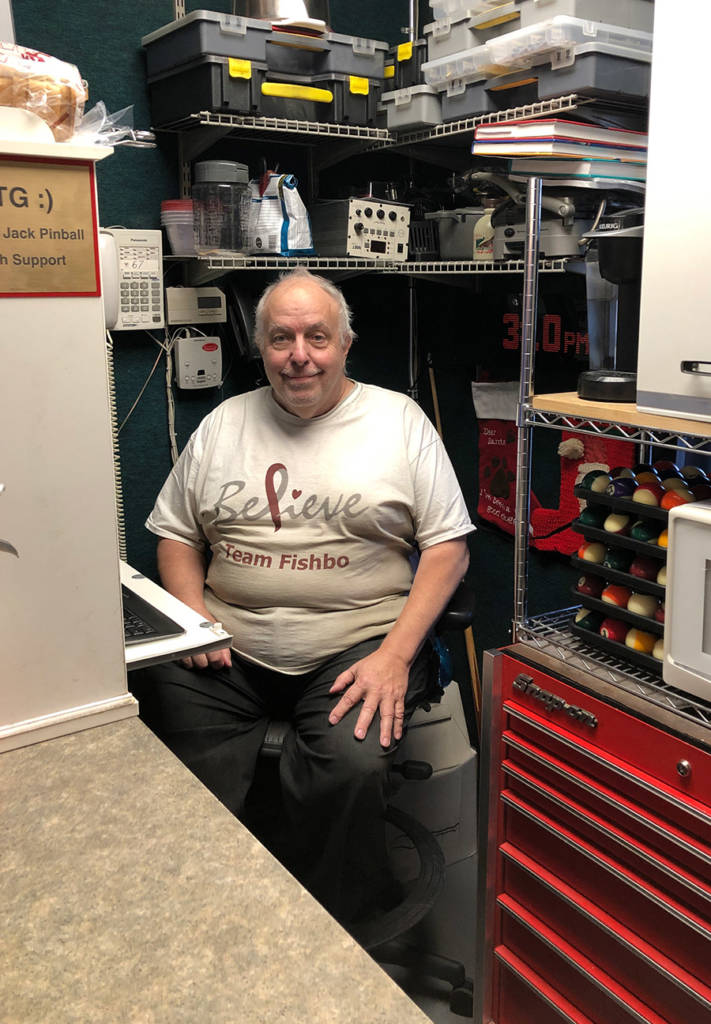 The Actual Man, The Living Myth, The Smiling Lloyd 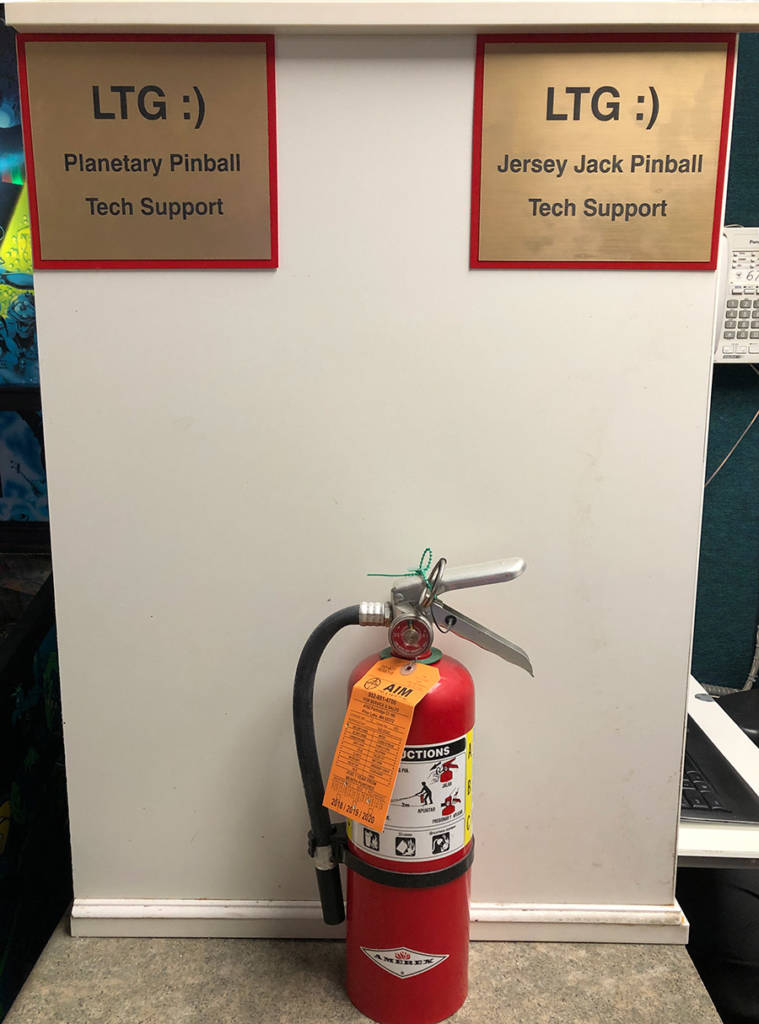 One piece of pinball art we found on the wall during our visit was especially noteworthy. 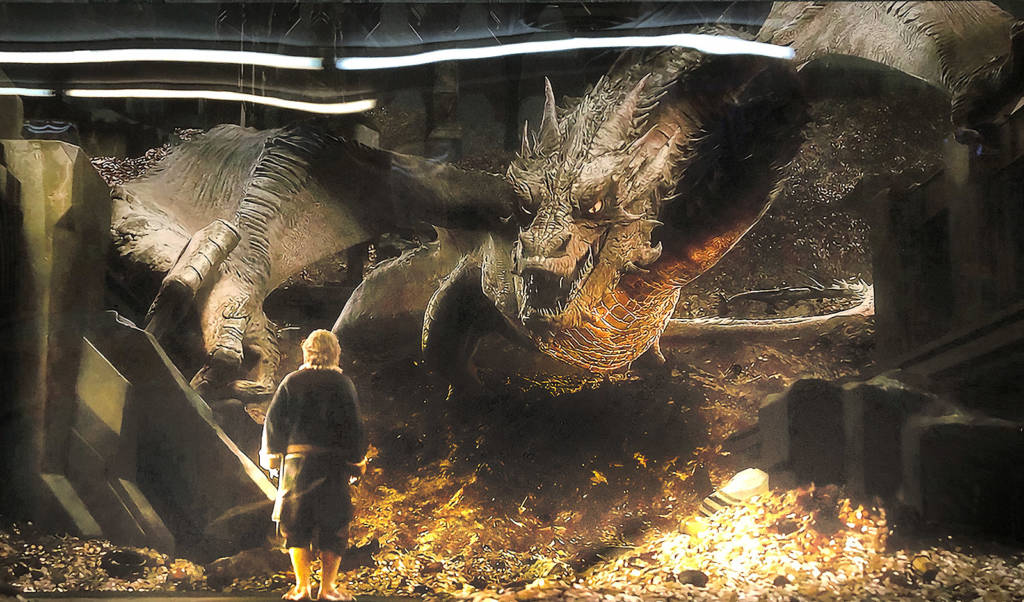 Though he didn’t mention it during the interview, we noticed LTG had a show of appreciation for all the help he has given to seemingly countless pinheads over the phone. 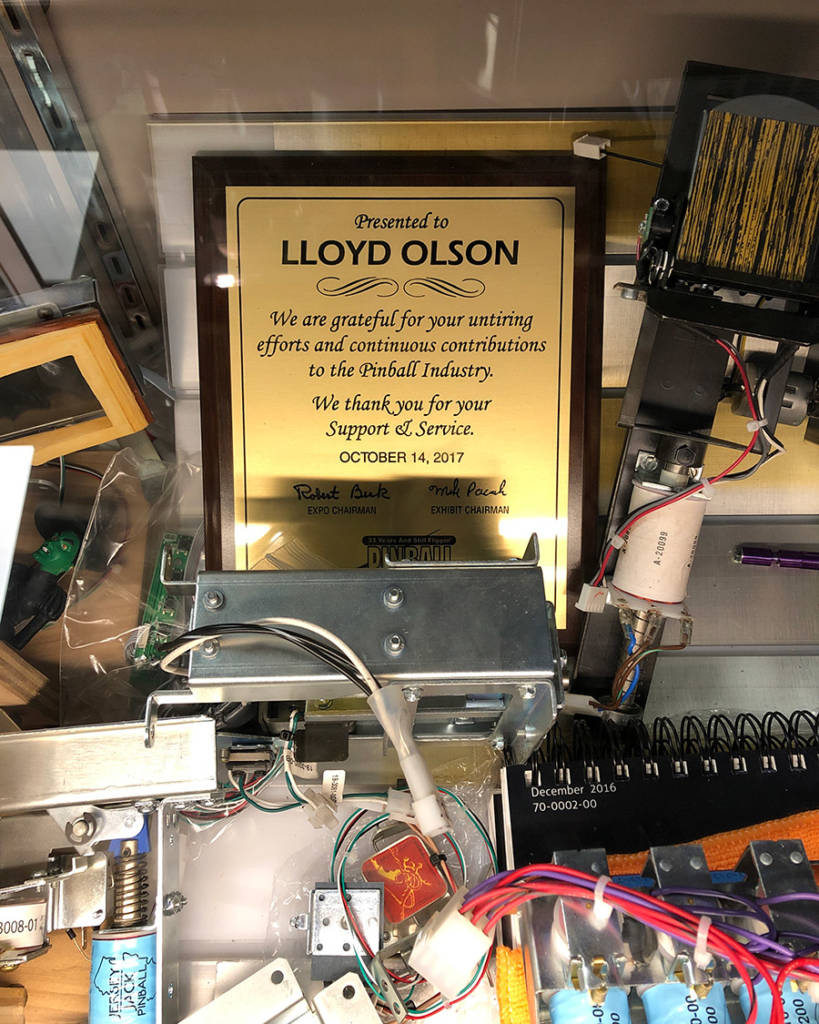 A ‘Thank You’ plaque nestling among the pinball parts

At the front door is LTG’s vending machine. 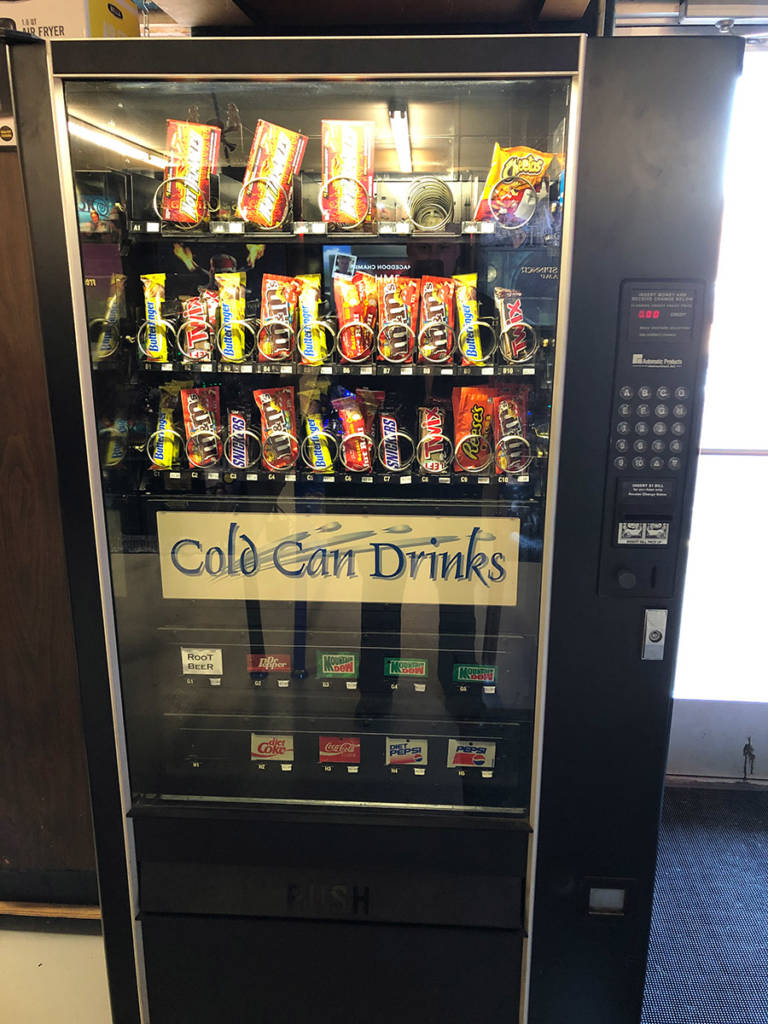 On the left side at the front are the three Chicago Gaming Company remakes together with a couple of classics. 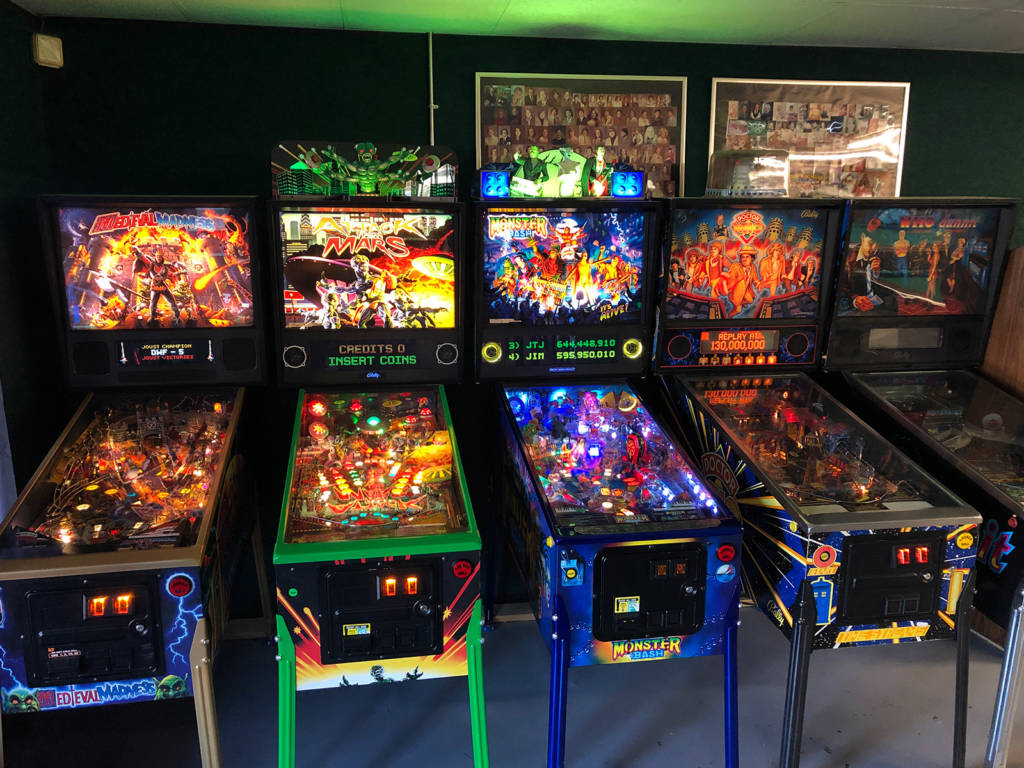 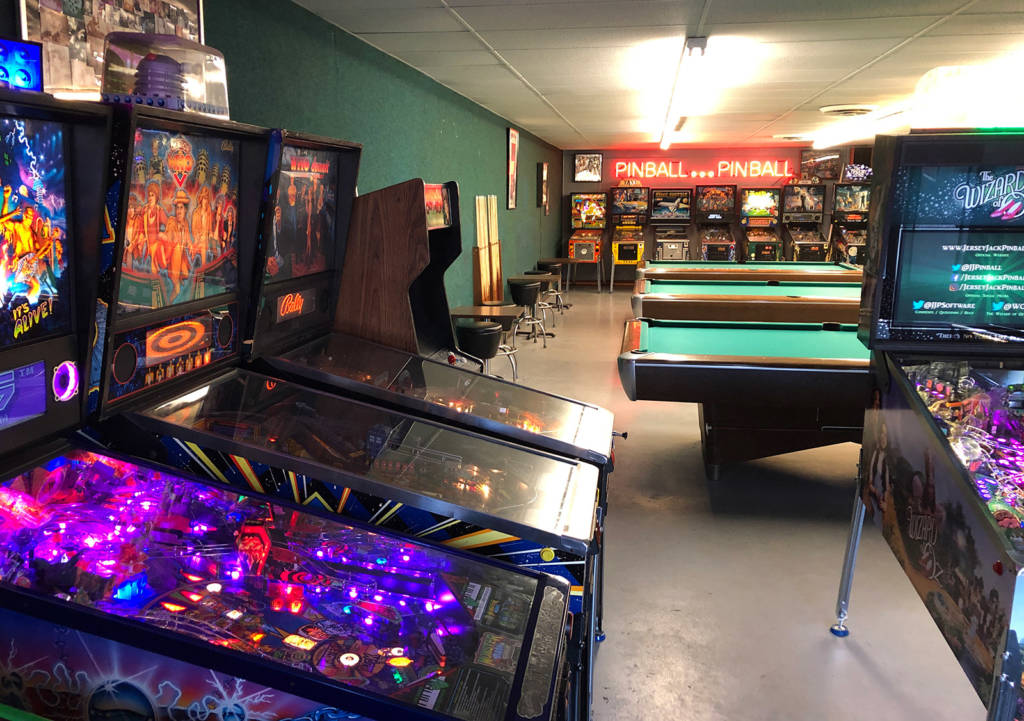 Pictured down the left side

Back to where we were – at the front. 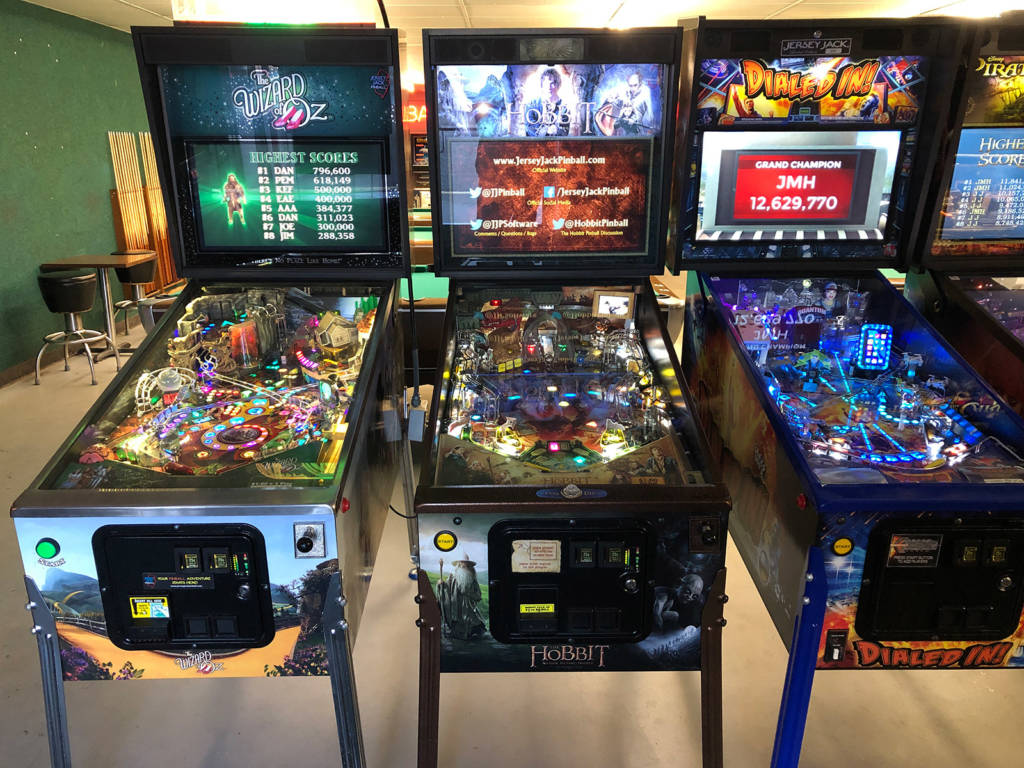 Up front with the Jersey Jack Pinball games – on the left we have The Wizard of Oz, The Hobbit, and Dialed In!

At the front on the right we have two more JJP pinball machines. 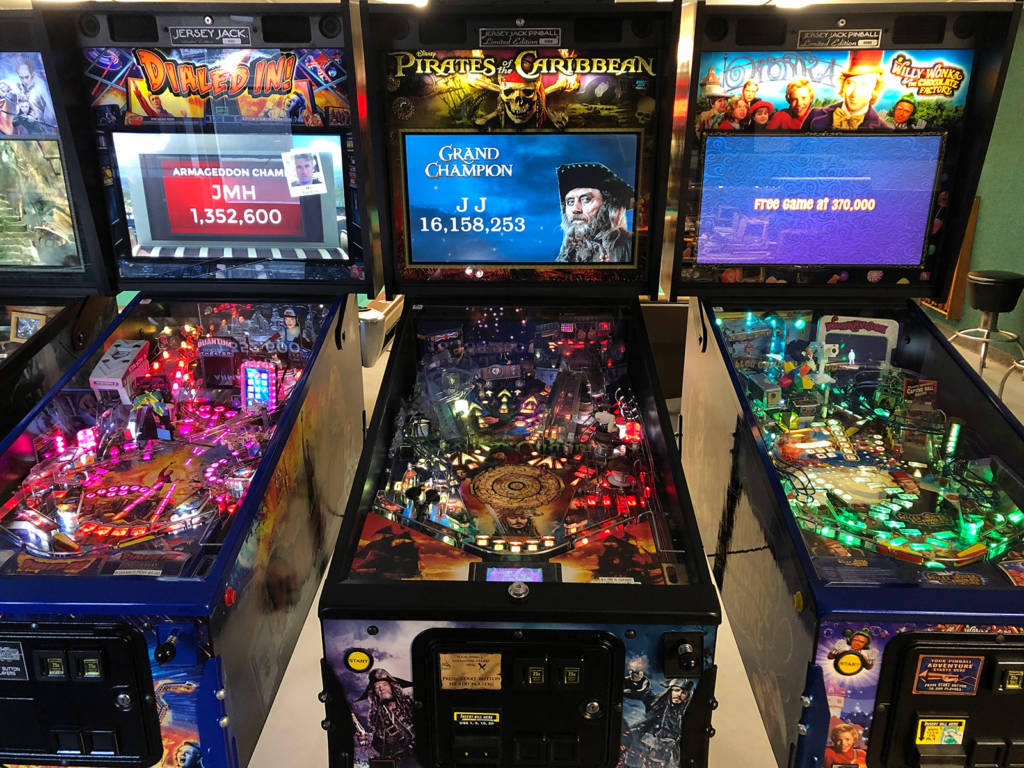 Shifting our view more to the right we have one video game and three more pinball machines. 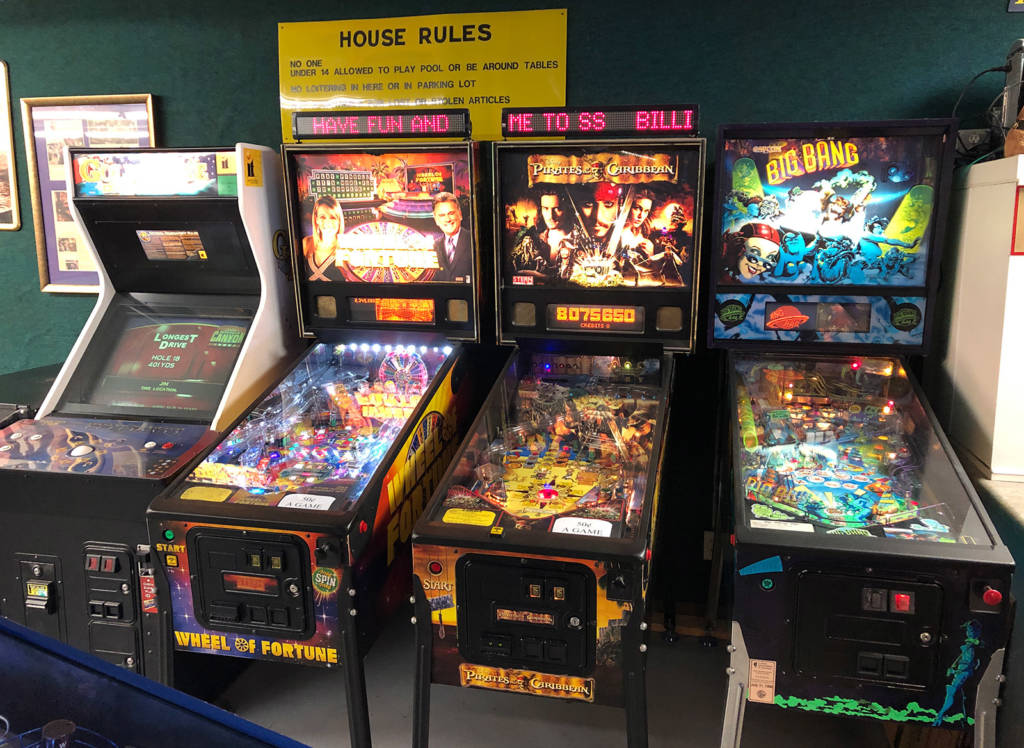 Next to Golden Tee we have Wheel of Fortune, the original Pirates of the Caribbean, and Big Bang Bar

Looking down the right side of Lloyd’s we see another row of pinball machines. 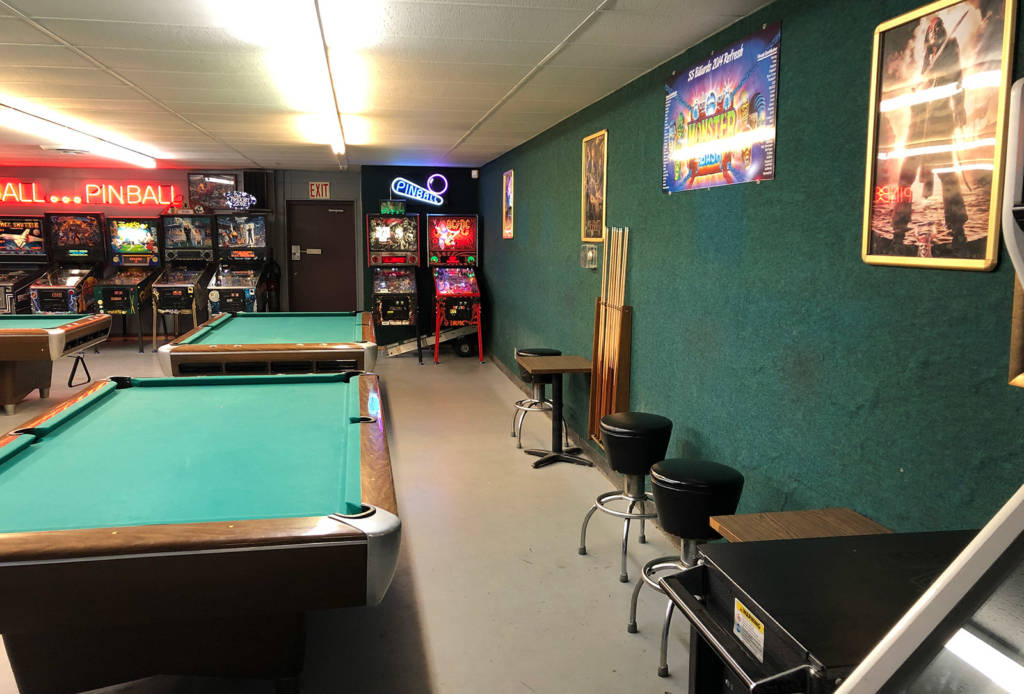 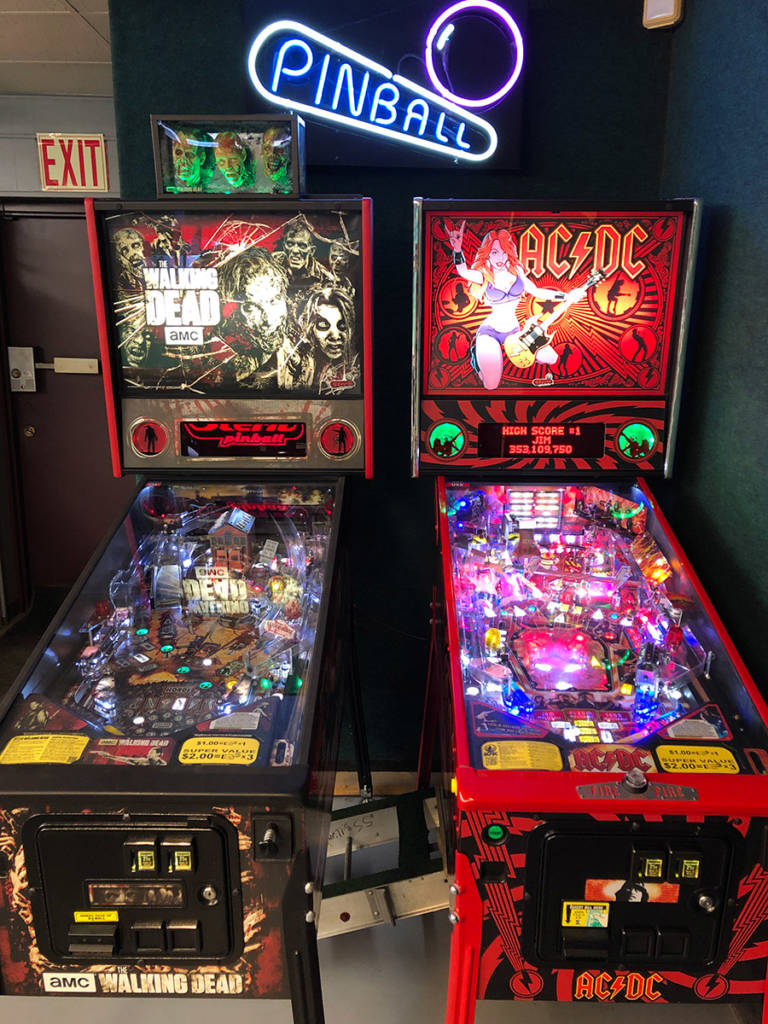 We have The Walking Dead and AC/DC Luci

In the larger section to the left we have seven more machines. This single section alone has more pinball machines than many other places have in their entire line-up. 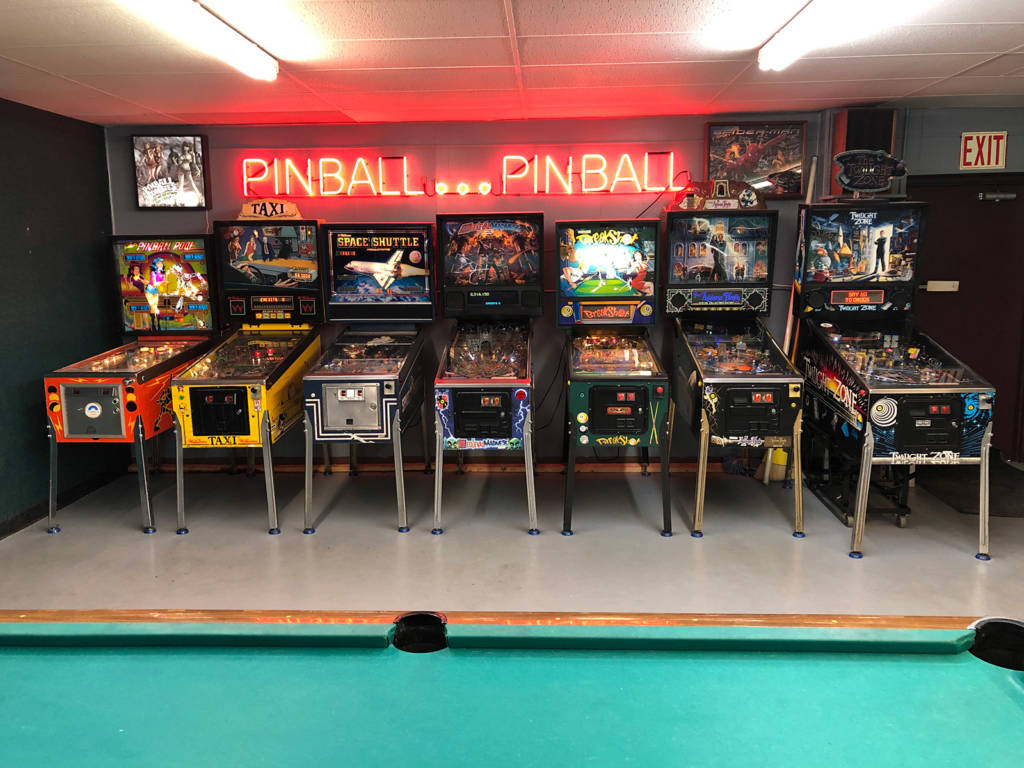 Let’s go in for a closer look and really appreciate the variety of pinball machines, and pricing, Lloyd has 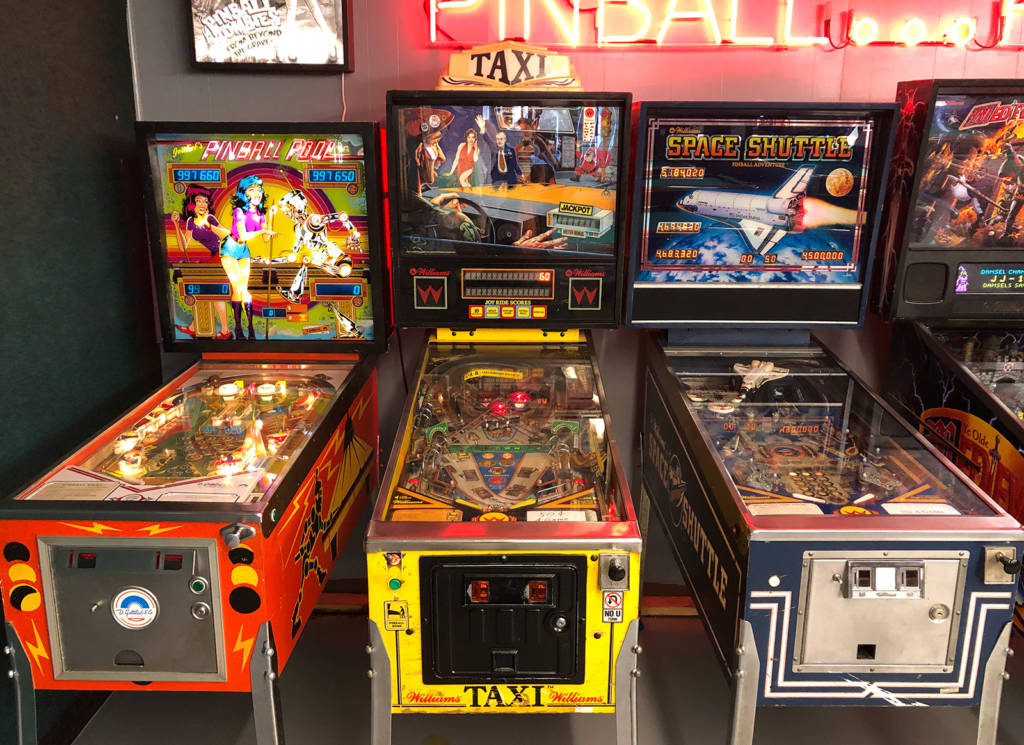 We start with Pinball Pool, Taxi, and Space Shuttle 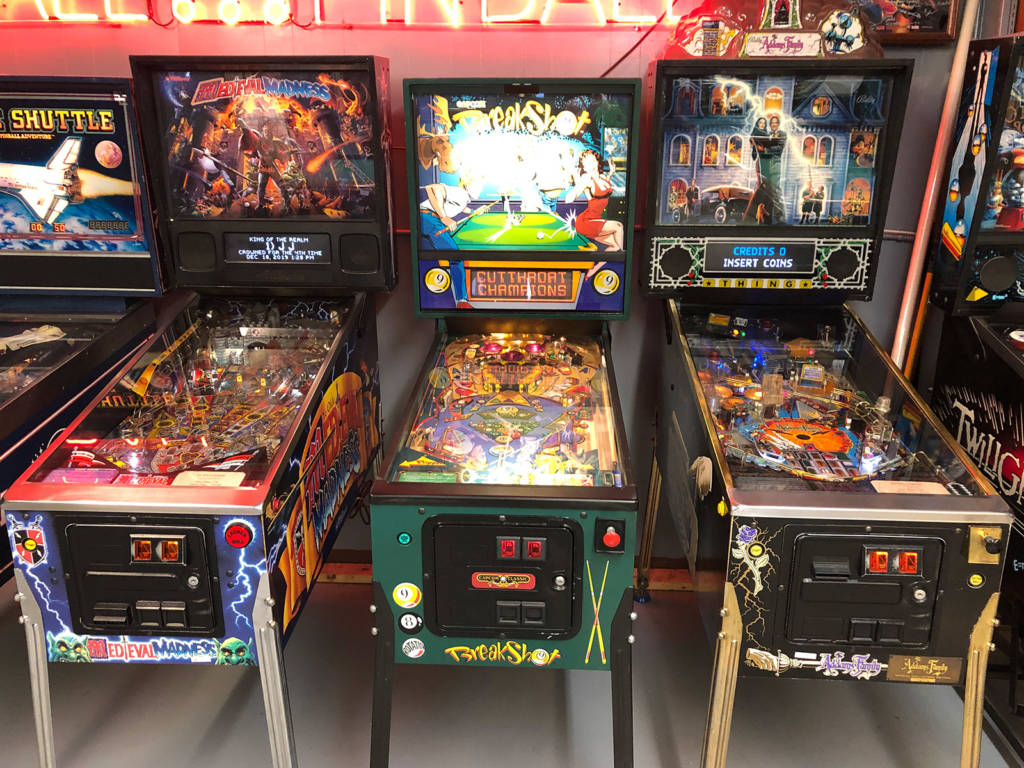 Finishing off the line we have the original Medieval Madness, the original BreakShot and the Special Collectors Edition of The Addams Family 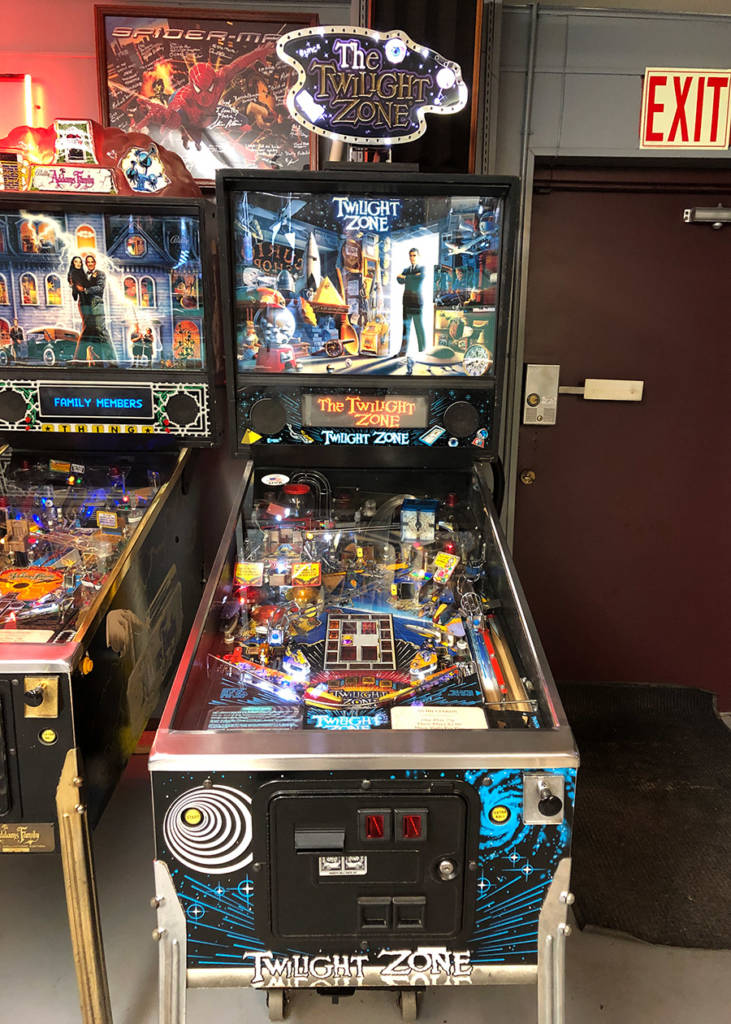 PBN: Could we get your thoughts on the following…
Offering a pleasant and approving smile Lloyd responded,
LTG: “Yes. Please. Anything I can do to help. Please let me know.“

PBN: How has the refresh has effected your business?
LTG: “The refresh has had a very positive impact on my business. Easily launched me five years ahead of where I was and enabled me to continue to grow and make improvements. And helped me weather things that happen that can really hamper a small business.“

“In 2017, Freeway 169 east of me was closed for 10 months. Because of detours and road closures, customers had trouble getting here or through the diverted traffic to get here. And right after that a new front and signage was put on the building, so for three weeks the strip mall I’m in looked abandoned.“

“In August 2019, Excelsior Boulevard was closed in August for three months, and while it was a distance from me, I did discover it was costing me business from customers used to traveling using that road west to my area.“

PBN: Which are the new pinball machines since the refresh?
LTG: “Bill Paxton and Breakshot both came in because of the refresh, right before the new floor was started. After the new floor was done, these machines came in – in order: Stern’s The Walking Dead Pro, Planetary Pinball Supply/Chicago Gaming Company’s Medieval Madness Remake LE, Jersey Jack Pinball’s The Hobbit LE, PPS/CGC’s Attack From Mars Remake LE, JJP’s Dialed In! LE, JJP’s Pirates Of The Caribbean LE, PPS/CGC’s Monster Bash Remake LE, Stern’s AC/DC Luci Vault Edition, and JJP’s Willy Wonka LE. These are all games I own. A while back Doctor Who and Who Dunnit? came on loan.“

PBN: Anything you wish to share about your new games?
LTG: “Of the thirteen new games, eleven were additions to the line up before the refresh. The Planetary Pinball Supply/Chicago Gaming Company remakes and the Jersey Jack Pinball machines are some of the finest pinball machines ever built.“

PBN: Future plans?
LTG: “Future plans include new lighting over the pool table area and new pinball machines coming in; I’m at my limit right now so when a new one comes in, a game has to go. I want to keep a similar price structure in place, so I have something for everybody yet can still remain profitable.“

“Besides future releases there is one current pin I hope to add to the pinball machines here. This takes patience and time. The AC/DC Premium was top of my list for five years and finally the stars and planets lined-up and a deal worked out when I got the AC/DC Luci Vault Edition.“

“I hope to keep helping people with pinball tech help. I’m rocking four phones, two e-mail addresses, private messages on Pinside and Facebook, two manufacturer help desks, pinball forums, my column on Pinside, and people stopping in with questions or wanting to check out particular games inside and out, and where they can buy them, in particular Jersey Jack Pinball machines and Planetary Pinball Supply/Chicago Game Company pinball machines. Some distributors I know that are good I refer potential customers to them for American Pinball, Spooky Pinball, and Stern Pinball machines, though I have less experience with the last three so I mostly let people know good sources for them. I tell them to let them know LTG sent them. I don’t get anything for it but the distributors know I’m sending someone who is serious to buy a game.“

“One change is I likely won’t do any more seminars in the future, and shows I attend will be less too. While I’ll miss the excitement and people, the cost and time spent will allow me to do more for my business.“

Ever freely-dispensing pinball advice, after the interview for this article LTG thought of something useful to him, which might also be useful to other pinball owners.

LTG: “I don’t know if I mentioned back when I picked up the roll cab. There is a limited number of tools and limited number of parts that I use a lot when fixing or cleaning something. I can roll the tools and supplies close to the game. Saves me running back and forth grabbing tools and parts, and then gathering them all up when I’m done. Saves a lot of time and a lot of trips. It’s set up with a handle on one end and a lift up work space on the other. So I can grab a stool and work on stuff right there and not have to drag it up front to the counter.“ 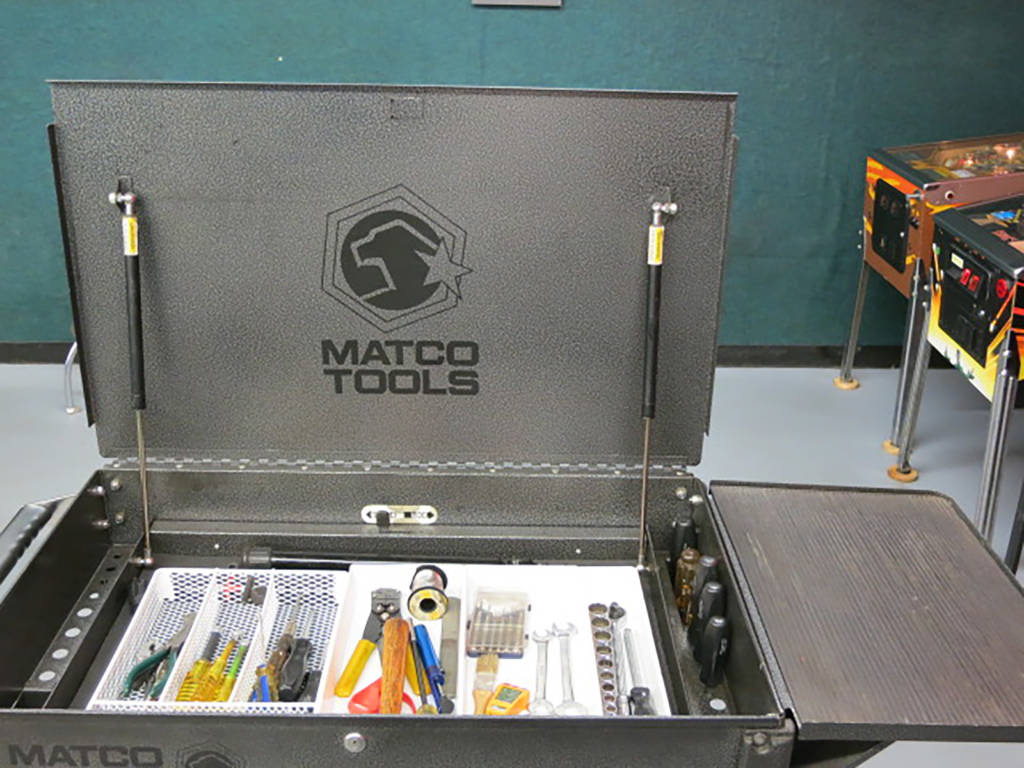 “Here’s a picture of a small Milwaukee tool carrier I picked up a couple years back that I haul to shows for fixing or cleaning if needed.” 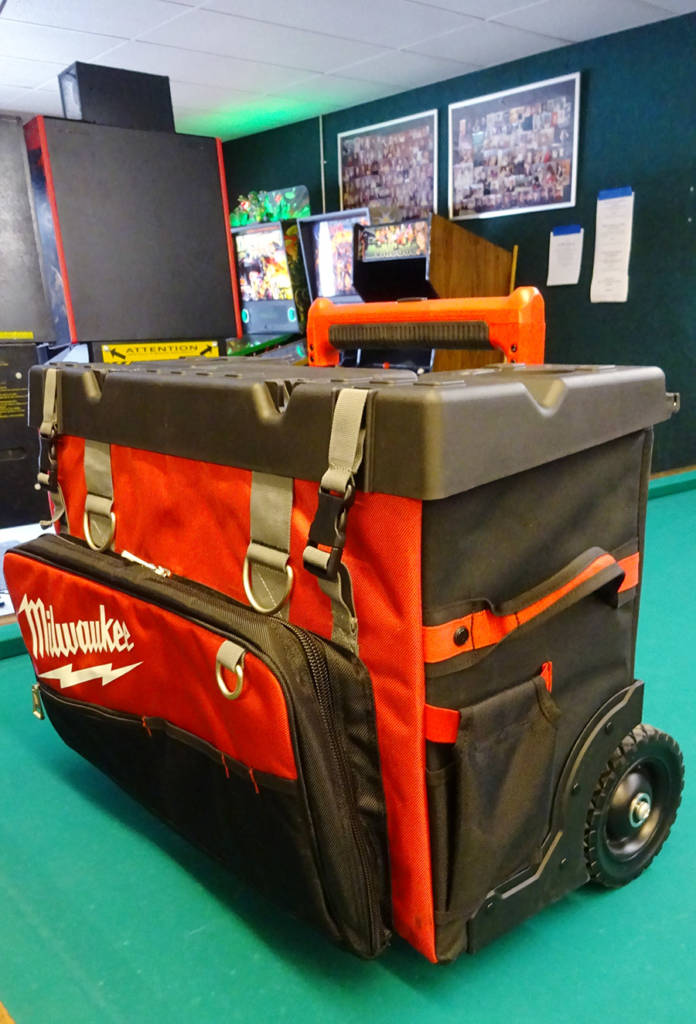 Well, that’s it for this trip to SS Billiards, but we’ll certainly be back to visit the living legend himself, Lloyd.

In the meantime you can also contact Lloyd through the Rec.Games.Pinball (RGP) newsgroup where he has been a member since August of 1996. He also has his own advice column, “Dear Lloyd“, on Pinside, and LTG can also be found on Facebook.