I have to agree with a lot of you folks. Soccer Stars really didn't have much replay value. But Just Andy and his pal have two new games out, among others, that I really do like.

They have Invasion Pinball, and Invasion Waves, an arcade game. Now I'm not much of a player, but I really to enjoy them both. And since free demos of all their games, at least the price is right.

Your absolutely right.Really that site is amazing..
The collection over there is also nice..Please keep sharing in future.Thank you so much for providing this link..

sXe And Better Than You

OK, that's got to be a fucking record. A FIVE year old thread resurrected by what I believe is a spambot.

Ain't those spam-bots a bunch of fuckers? :)
G

tiltjlp said:
...Andy and his pal have two new games out, among others, that I really do like. They have Invasion Pinball, and Invasion Waves, an arcade game.

pitterson said:
Your absolutely right.Really that site is amazing..
Click to expand...

TheMcD said:
OK, that's got to be a fucking record. A FIVE year old thread resurrected by what I believe is a spambot.
Click to expand...

Well, it's 10-1/2 years old now; I had Invasion Pinball on my rig (though the Trial period had expired) when a memory DIMM scrambled the HDD and I decommissioned it in February 2011, then finally pulled it out yesterday for one last look before formatting due to a new problem. Invasion PB is among several things I had forgotten about, and I ran the installer onto the donor (not new by a long shot) hdd and got a fresh trial out of it, and I think I'll plop down the $20 this time. Sooooo...

Have any of you played it, or remember doing so? What'd you think of it?

PS: Drop us a word if and when you can, John.....miss your stories.

Yeah, GS. You and me are the only ones in this thread who are still present. Are you still with us John?
G

Every so often, I run web searches to see if anything has been recently posted about or by certain people whose output is missed, and this time I happened to notice the PN Download Profile for Country Carnival---a FLIPPERED table by tiltjlp and Terry Briggs from 2002. I had to check it out, and after I got VPMidi-dot-whatever and gave up trying to find out what SDBVision is / was, I played 40 or so games on it and enjoyed it (all except the perceived dyslexia when my view shifted by only half of a flipper pair).

Anyway, looking for a suitable forum for Invasion Pinball brought me to this thread---by none other than tiltjlp---so here we are.

I almost can't remember now, but Scott B. (I think he had a different username) was one of the scene's pioneering innovators in the early years, around 2002. He was a true programmer.
His claim to fame was his semi-original table, "Super Mario Bros." which used the playfield *I think* from "No Good Golfers", but with Mario Bros. graphics and mini-games.

SDBVision was used to provide a working DMD and animations at a time when these features did not exist on original VP tables. He also planned a Castlevania table, and I sent him "clip art animations" which I lifted from many, many screen grabs, from the PS1 "Castlevania: Symphony of the Night" video game.

But he burned out and left the scene shortly afterwards. I wonder about him.
He released a beta of the Castlevania table, to trusted testers, but they were sworn not to give it out, and I've never seen a copy of it myself.

Some of the burnout was due to unauthorized mods of his SMB table by scumbags looking for easy glory by doing superficial graphics tweaks to the table and splashing their name all over'their version' who then fought with Scott after Scott put so much hard work into it.

I found Wildsnake's PB stuff to be fairly innovative, but not necessarily well-designed or well-implemented. I guess it would be good for kids or such.

Meanwhile, the humble little Nintendo NES had some of the best 8-bit simulations I've ever come across. Several of the titles are extremely innovative as well, such as Pinball Quest and Rock 'n Ball.

Rock 'n Ball featured several head-to-head tables, not unlike such real-life tables as Joust and Challenger:

(high-def scan, click to blow up, then zoom in on left to see tables)​
What's more, you could play vs. a surprisingly decent AI if you lacked for a human opponent. The physics are nothing special, but they work well enough.

You can play Rock n' Ball online here: (be sure to redefine the keys via the little gamepad icon in lower left) 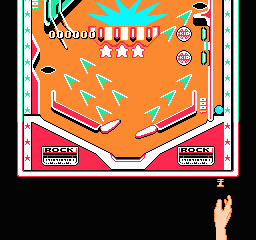 In Roller Ball, you started at the bottom of a stacked-up four-stage table and tried to work your way up to the top to finish the 'super challenger' mode. The ruleset made this a great game in which to patiently progress and use little bits of technique you'd discover along the way. This one had excellent replay value in particular, since completing the final stage took some patience. 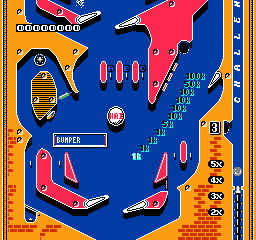 Play Rollerball (USA) (NES) for free in your browser.


Pinball Quest was a little more fanciful and kid-oriented, but took that idea even further with around 10 different stages and an item shop.

such simulations as "pin bot" and "high speed" were quite impressive for such a primitive gaming system.

and of course, these are all free to play via emulator. so if you don't mind the dated graphics, there is a lot of fun to be had here. here's a more complete roundup:
http://www.classicplastic.net/dvgi/publications-RTMnescadeSaluteSilverball.html
Last edited: Dec 3, 2021
Share:
Facebook Twitter Reddit Pinterest Tumblr WhatsApp Email Share Link
General chit-chat
Help Users Options