Unlike previous ‘The Pin’ models such as Heavy Metal, the two Star Wars games and Ultimate Spider-Man which shared a common playfield design with differing artwork and models, Jurassic Park Pin is a new design by Jack Danger who is better known for his Dead Flip pinball streaming channel on Twitch. 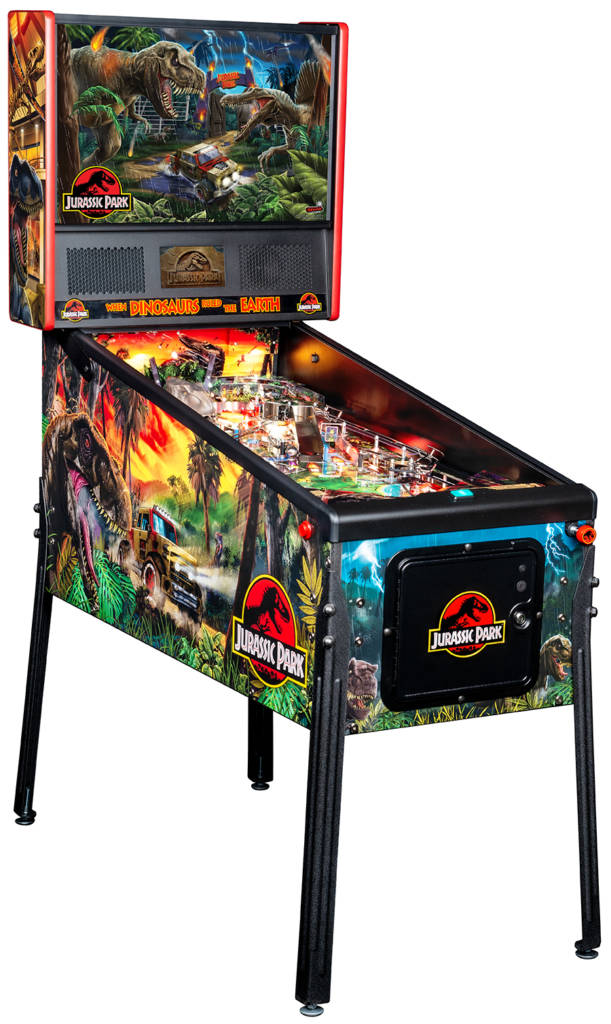 The left side of the cabinet

The front of the cabinet 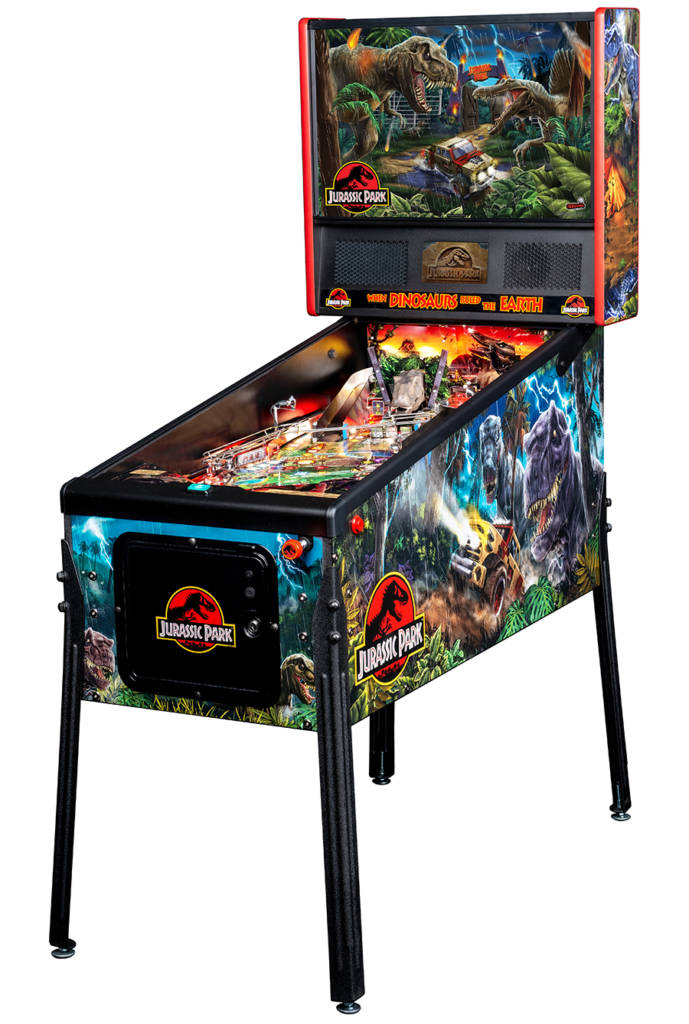 The right side of the cabinet

Jack has teamed up with software engineer Waison Cheng and mechanical engineer Robert Blakeman to create this new design. Rather unusually, Jurassic Park Pin features the same backbox artwork previously only available on the full-size Limited Edition variant of Jurassic Park, although that top-end game had a mirrored backglass whereas the Jurassic Park Pin‘s artwork is printed on a translite. 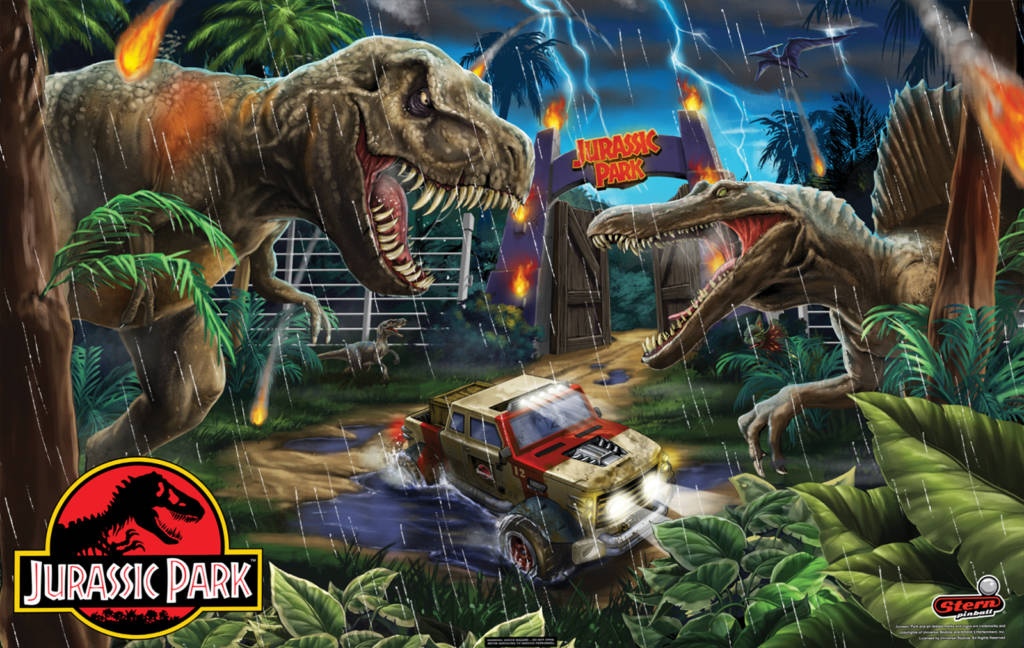 The Pin range is not designed to be operated and thus doesn’t have any coin mechanism on the front door. It also moves the start button onto the lock bar to make it more obvious. 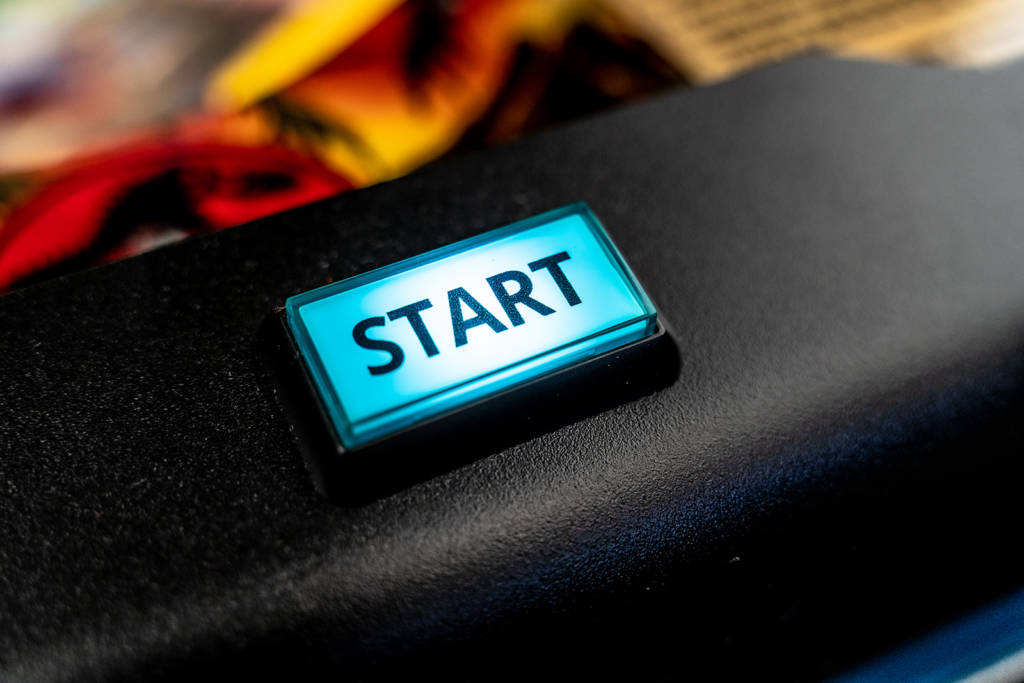 The start button is on the lock bar 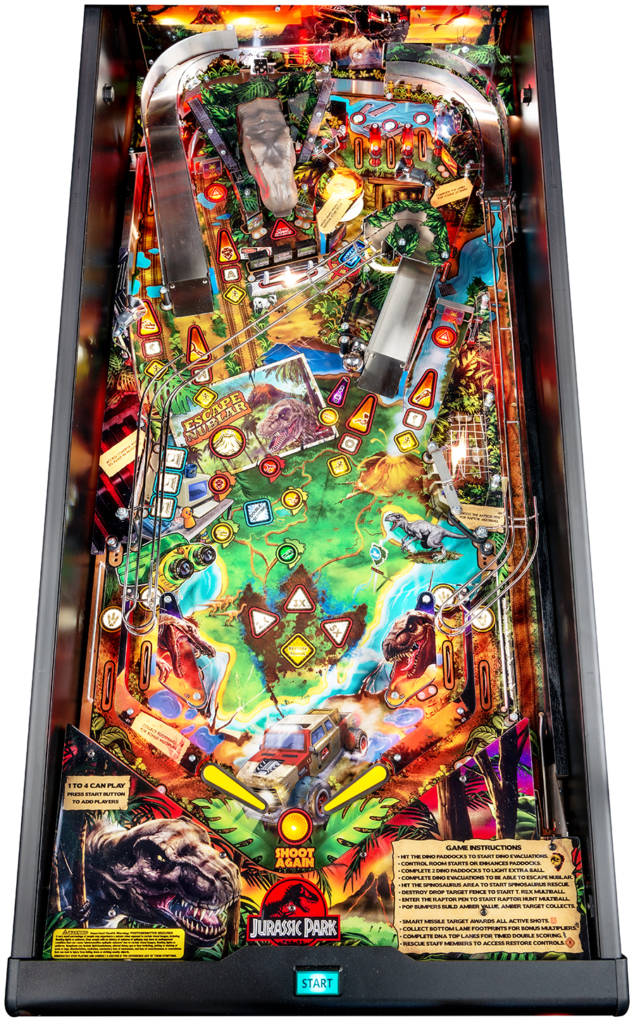 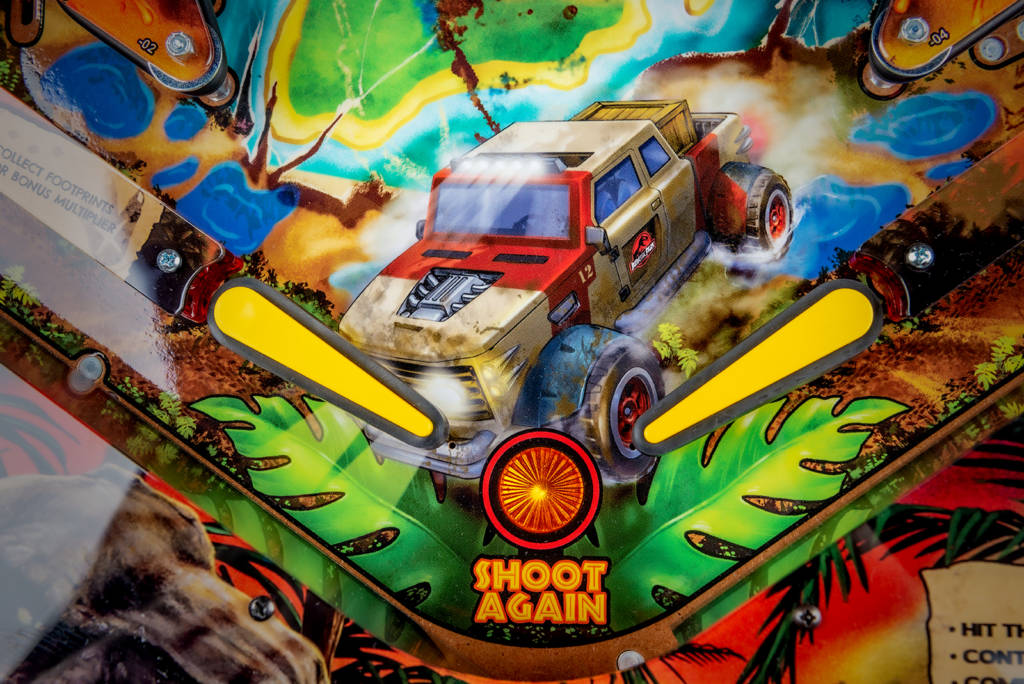 The game has two regular flippers 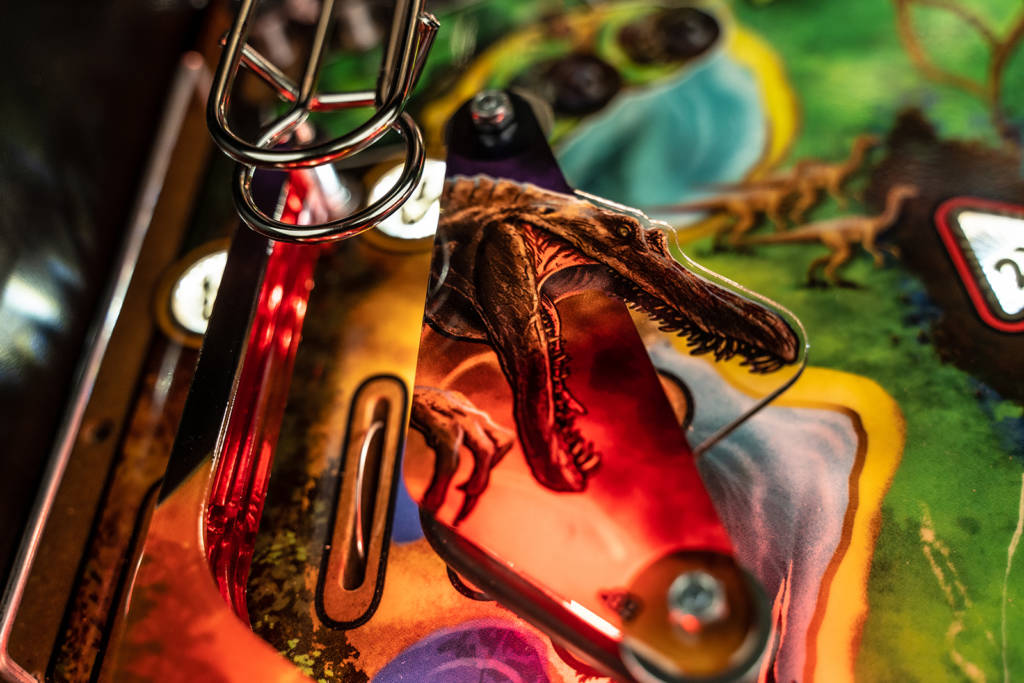 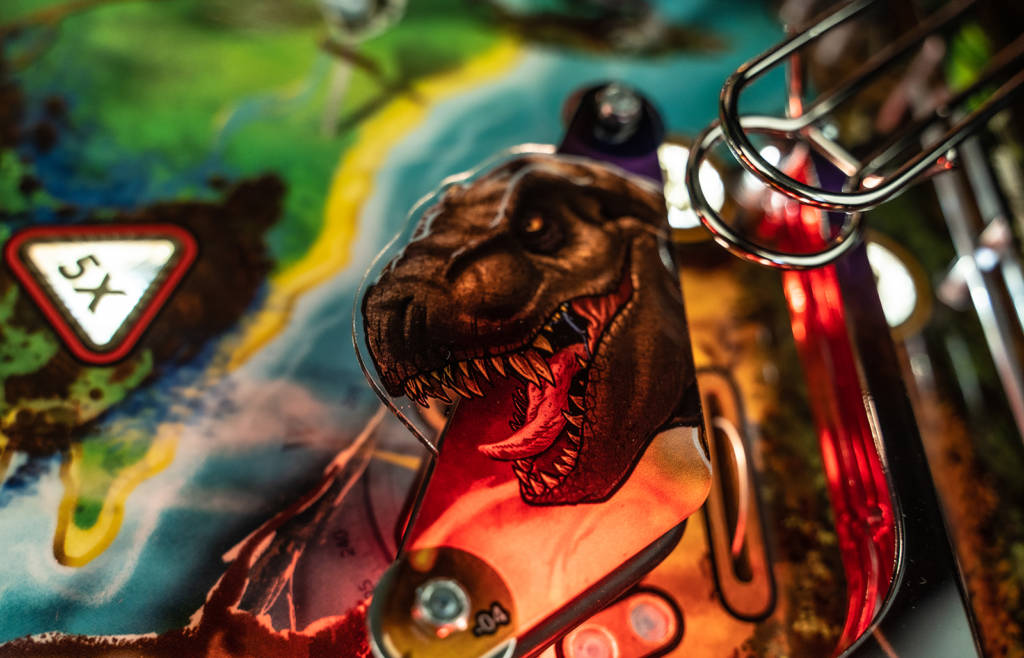 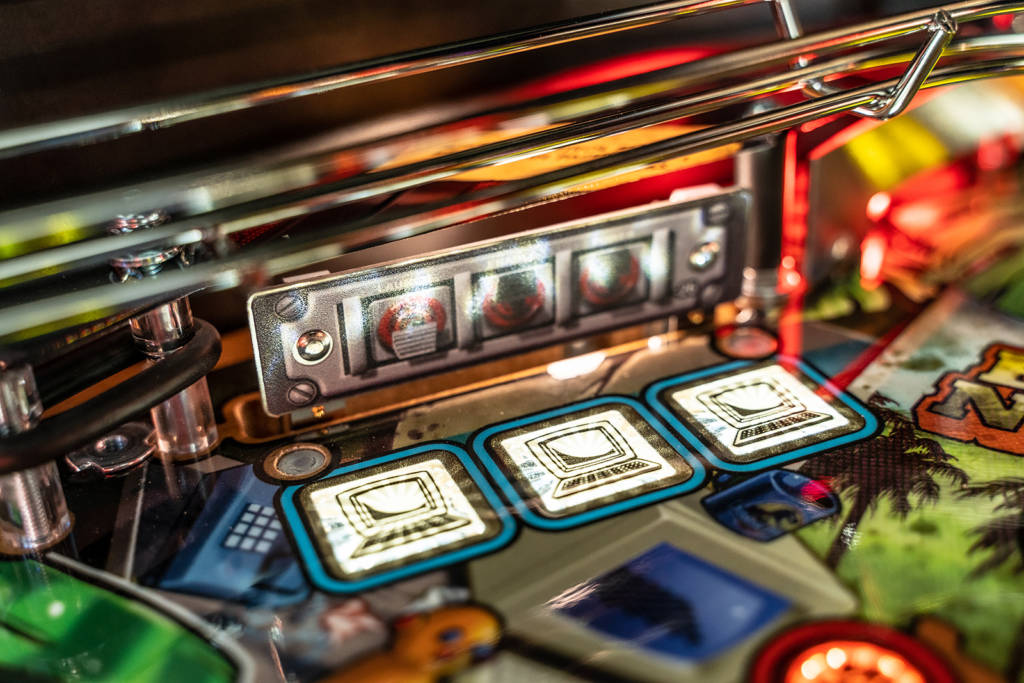 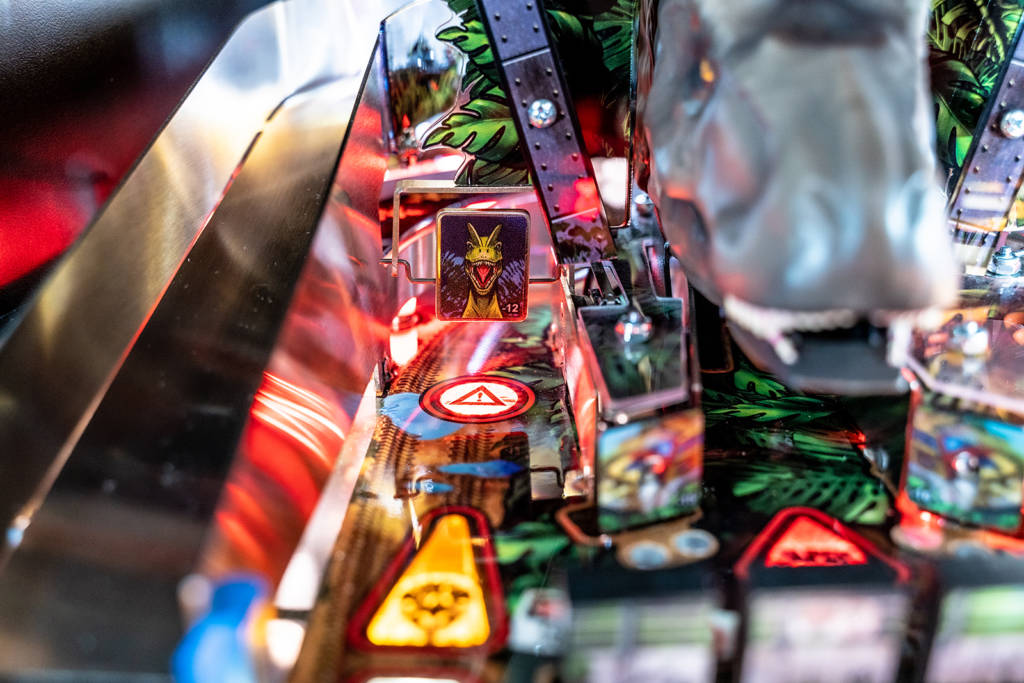 The main toy in the game is the T-Rex which has a 3-bank of drop targets in front, a shot beneath and it can hold the ball in its mouth. 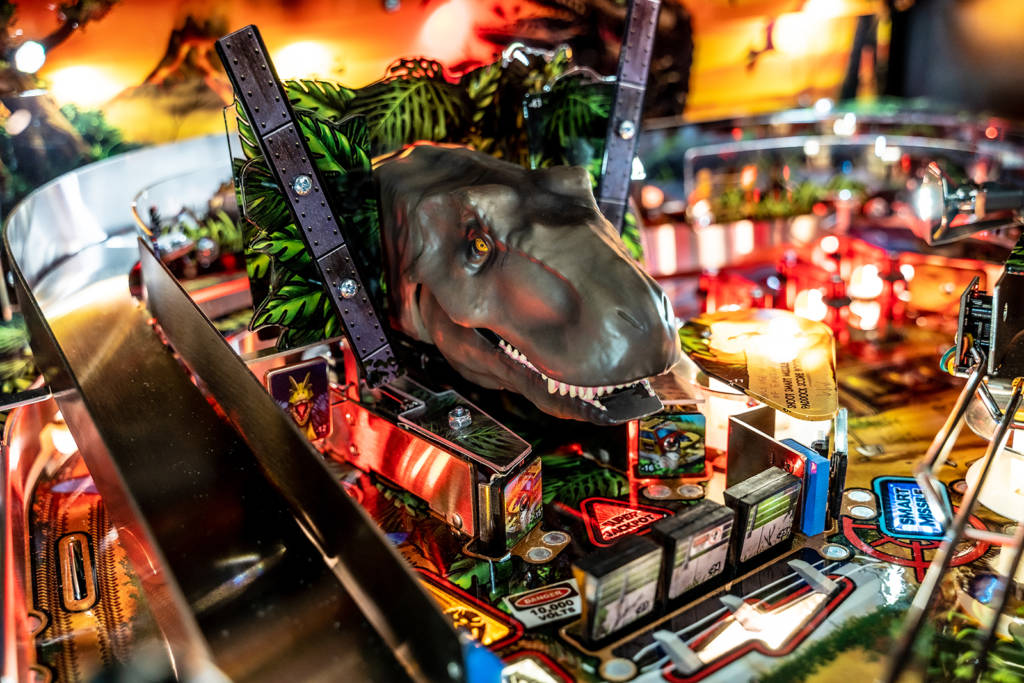 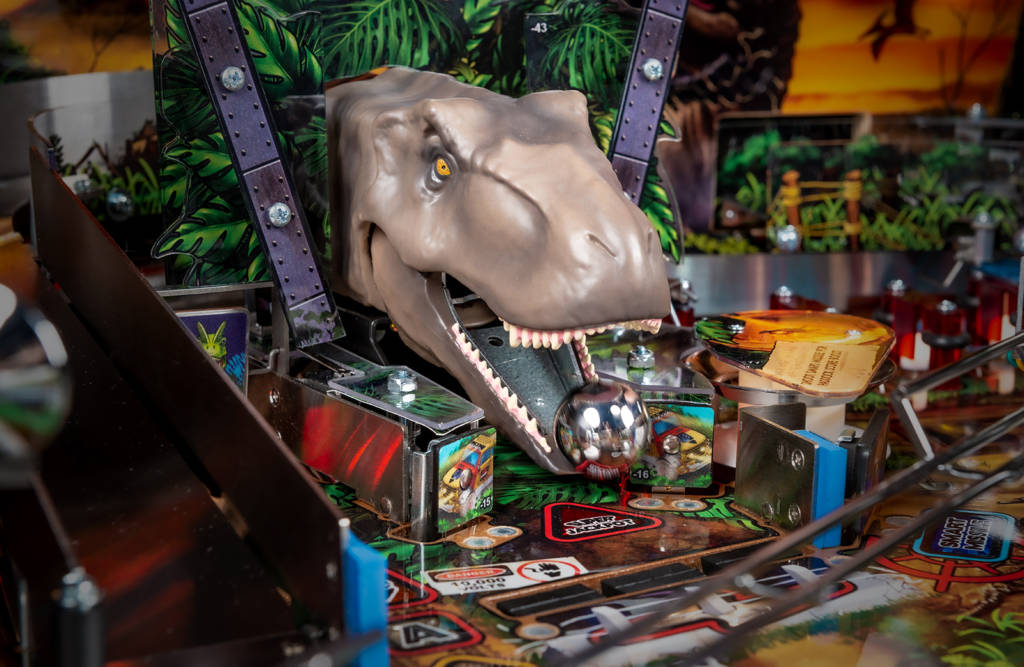 The T-Rex releases the ball 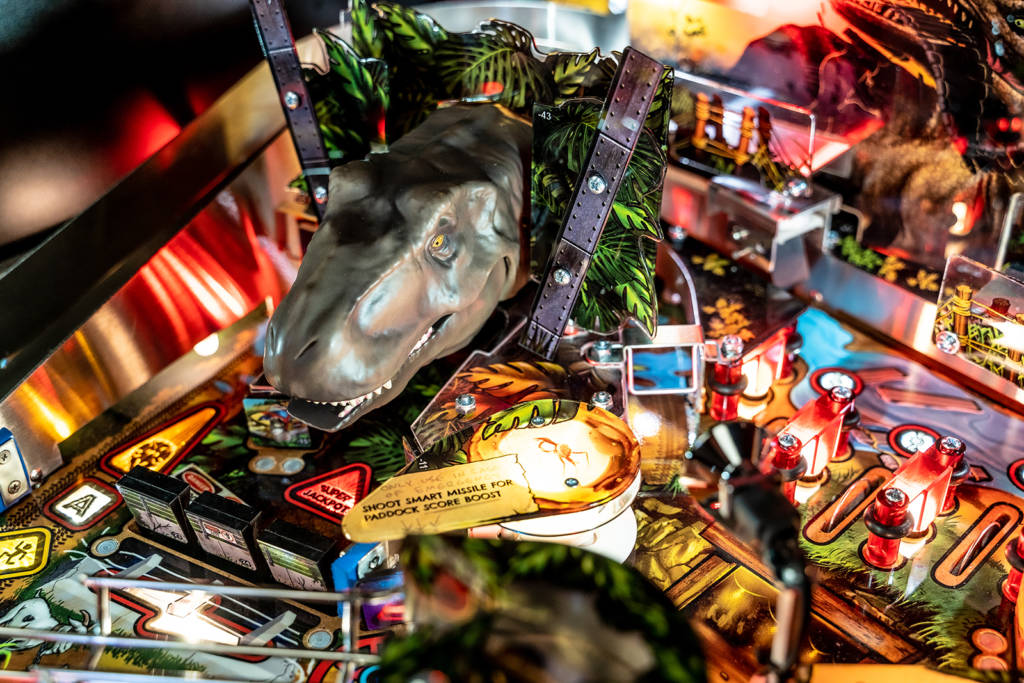 The top left of the playfield 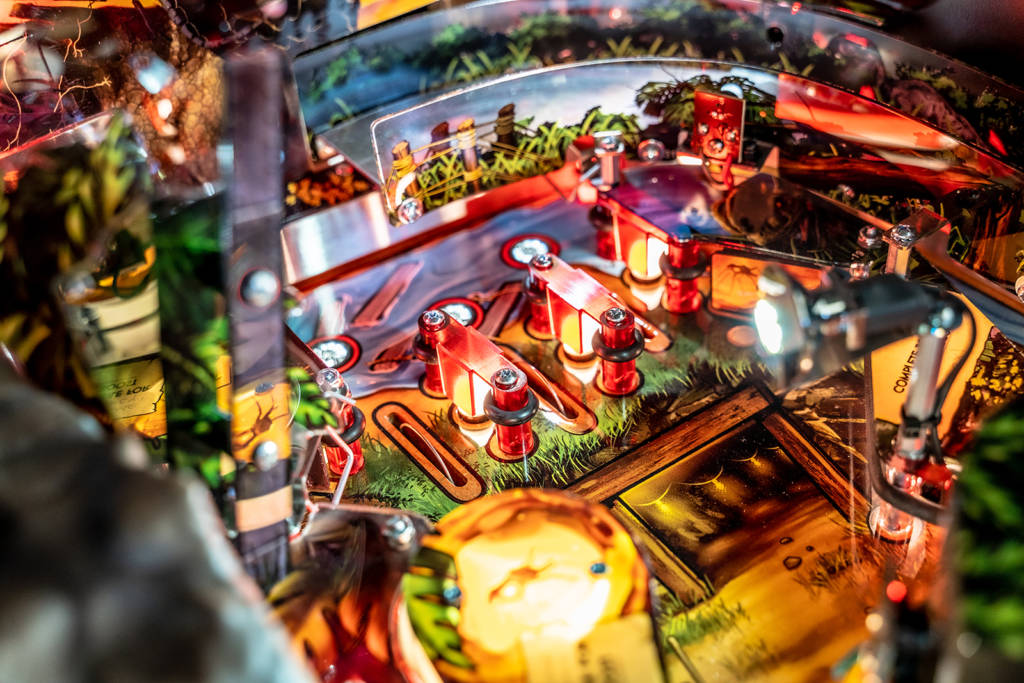 The left ramp includes a gap which has to be jumped, otherwise the ball drops into the top D-N-A rollover lanes. 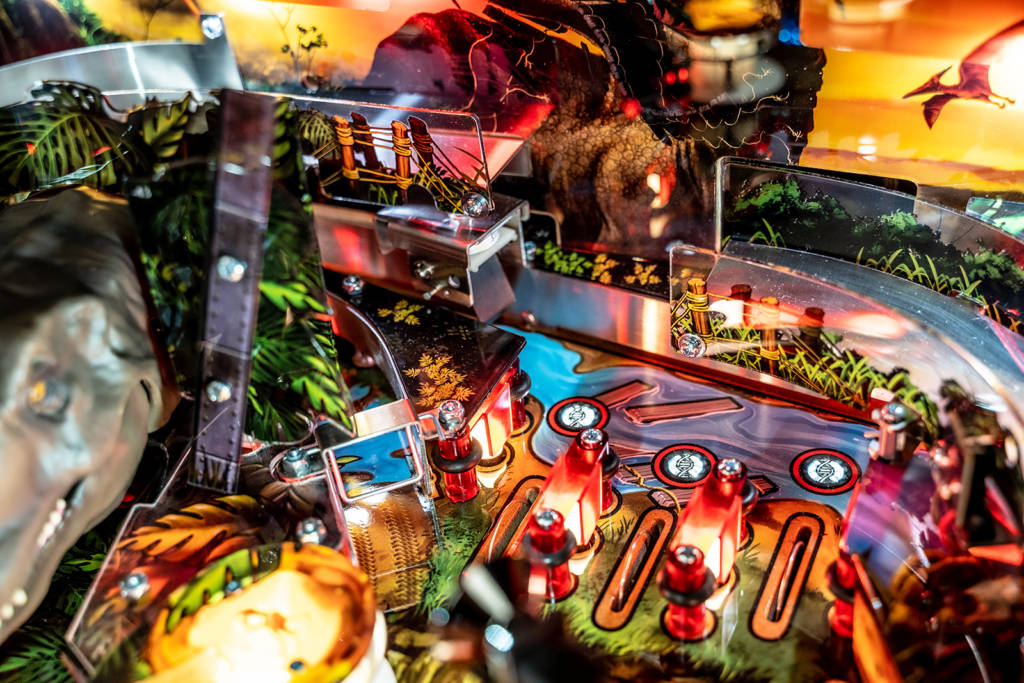 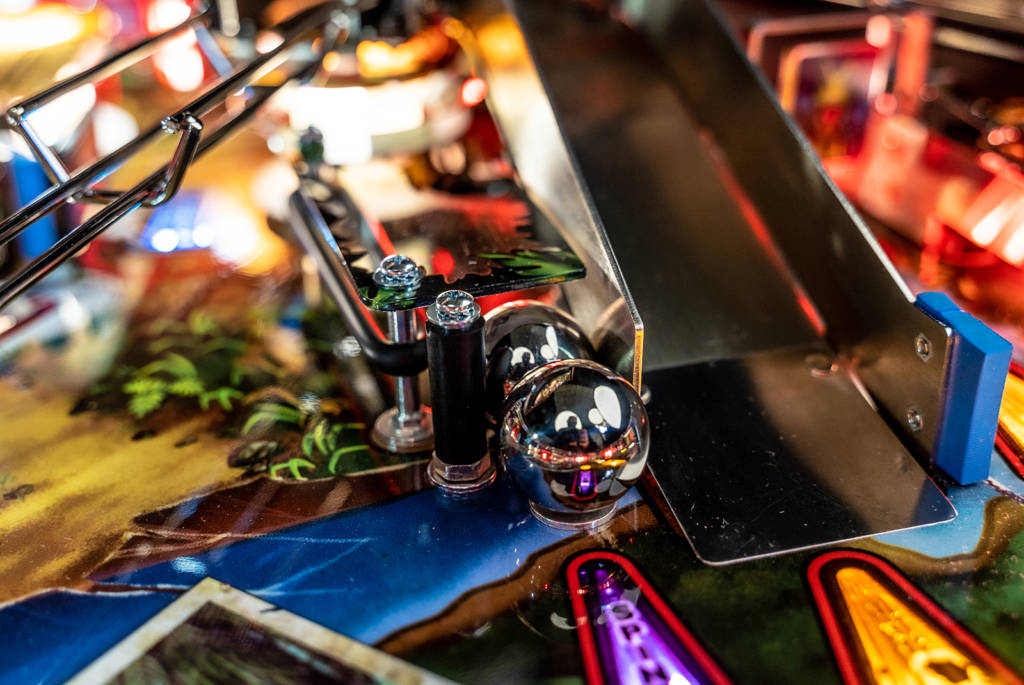 The captive ball shot next to the right ramp 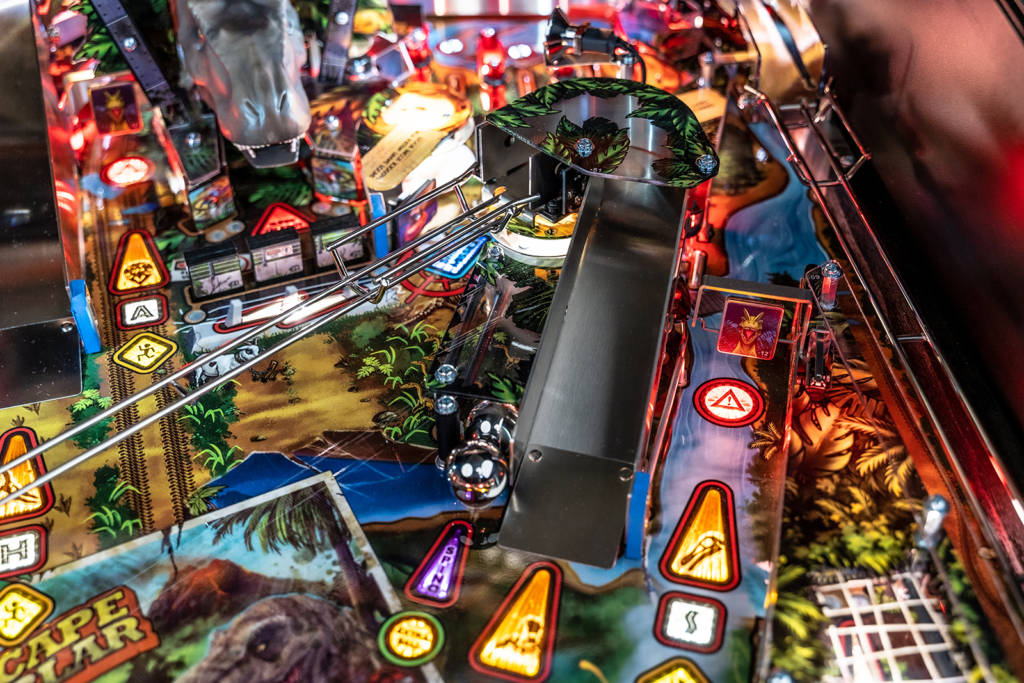 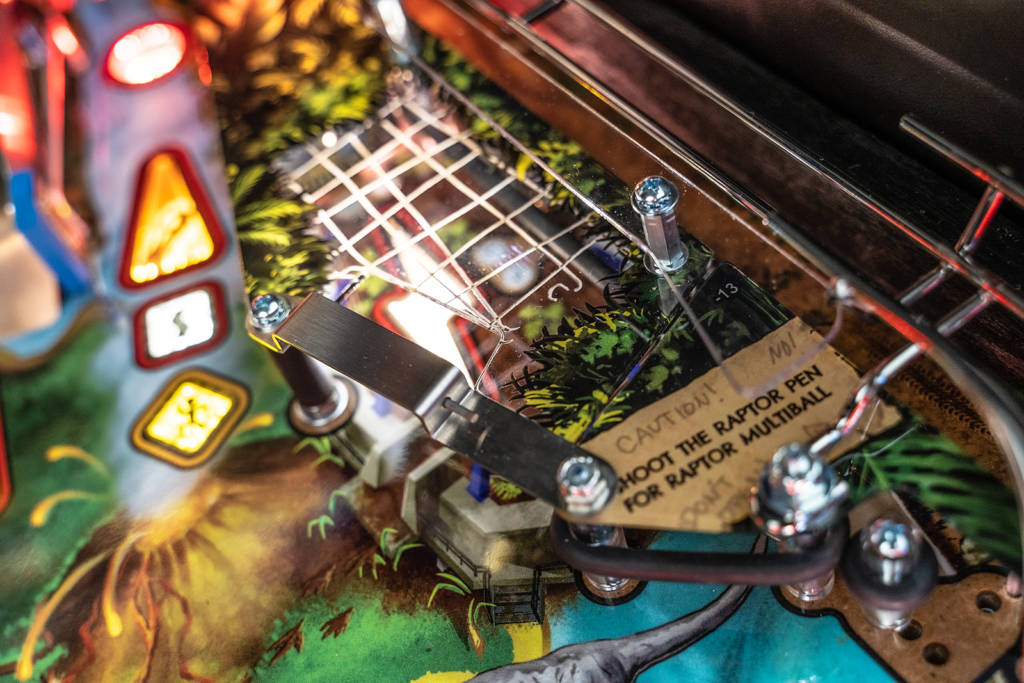 The Raptor pit on the right side of the playfield 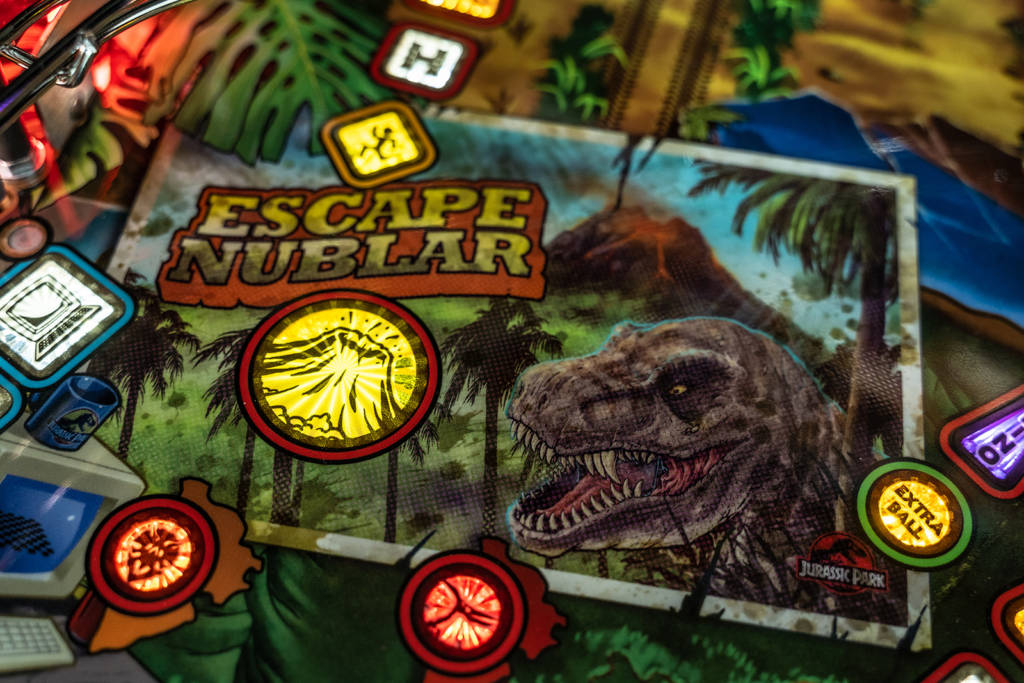 Some of the feature inserts 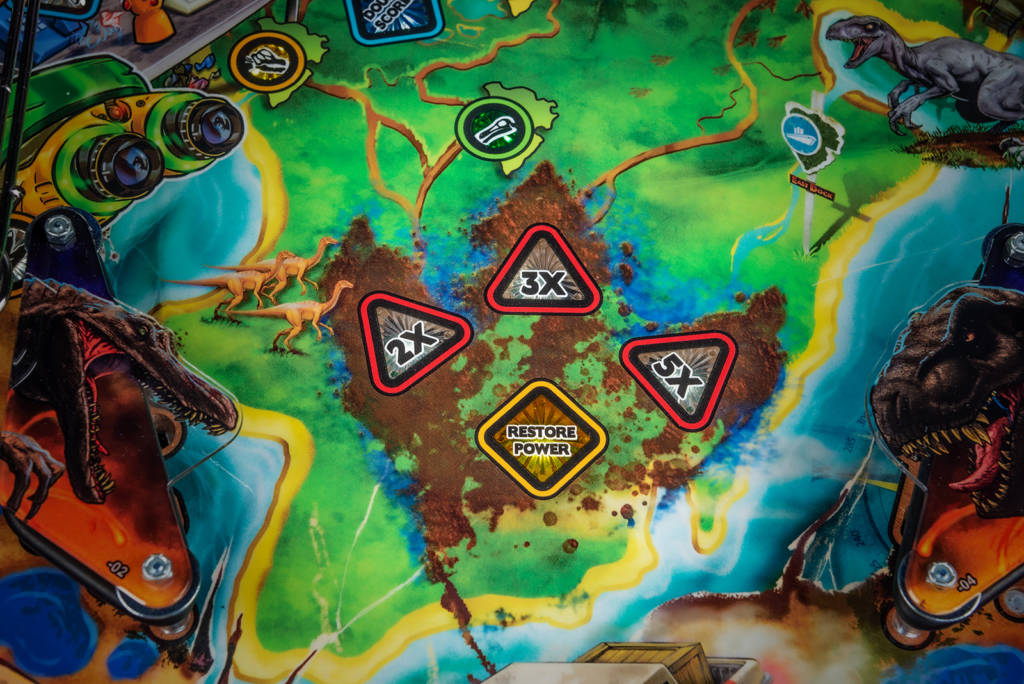 Bonus multiplier inserts are lit by the inlane and outlane switches

Stern have produced a flyer for distributors to use to help promote the game. 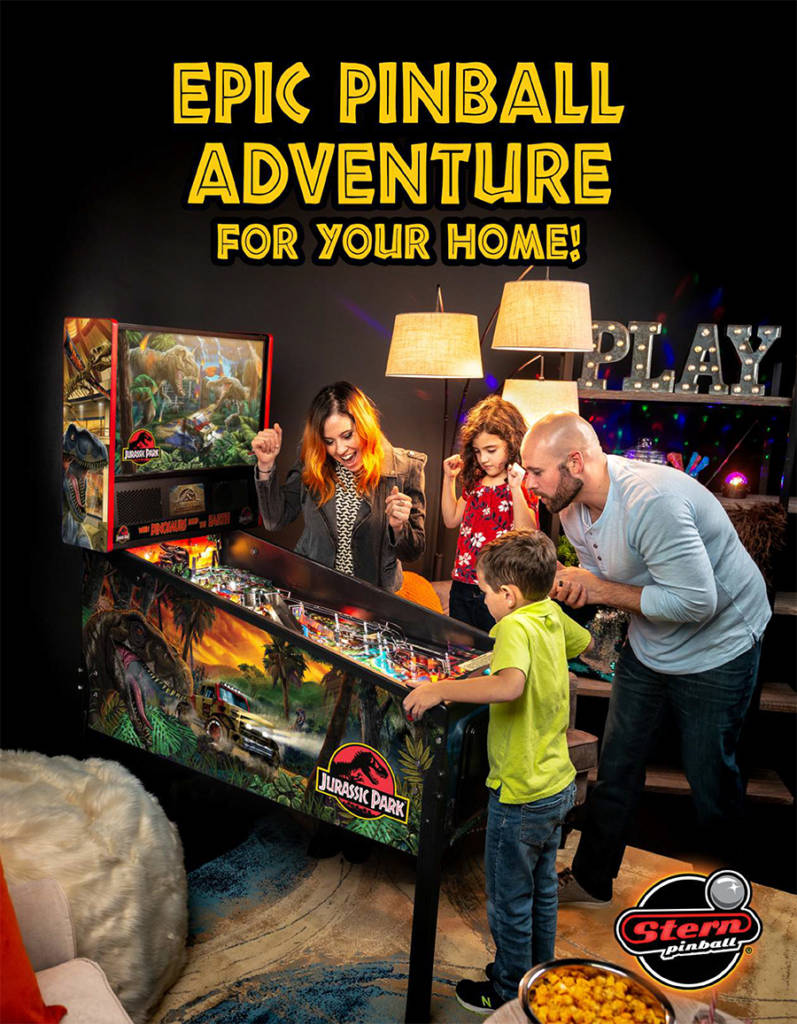 The front of the flyer 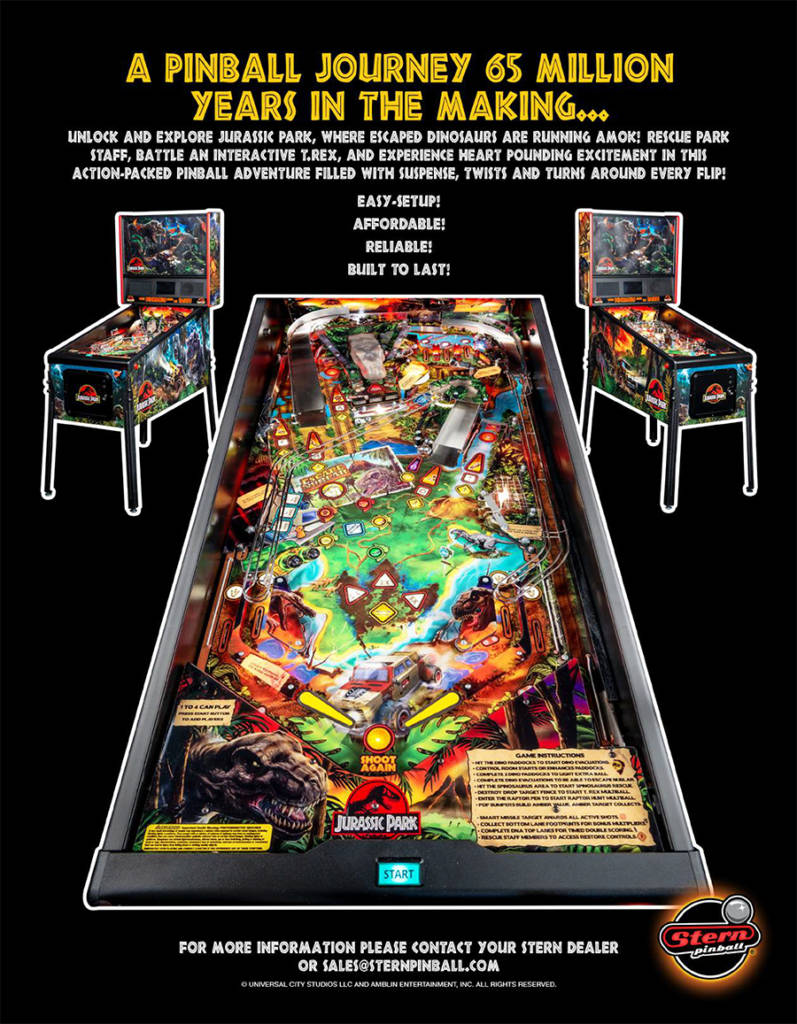 The back of the flyer

Jurassic Park Pin is priced at $4,599 which is $1,600 less than the equivalent Pro model of the same title (or $1,900 less compared to a Pro with the Insider Connected QR code reader installed). To achieve the lower price there are some alterations to the game’s construction, including making the playfield and bolted-together cabinet out of MDF rather than plywood, having fewer mechanisms and flippers, making the pop bumpers operate as one rather than having individual control, and making the LCD panel in the backbox significantly smaller.

With an MDF playfield, some of the targets have to be mounted from the top-side rather than screwing into the underside. 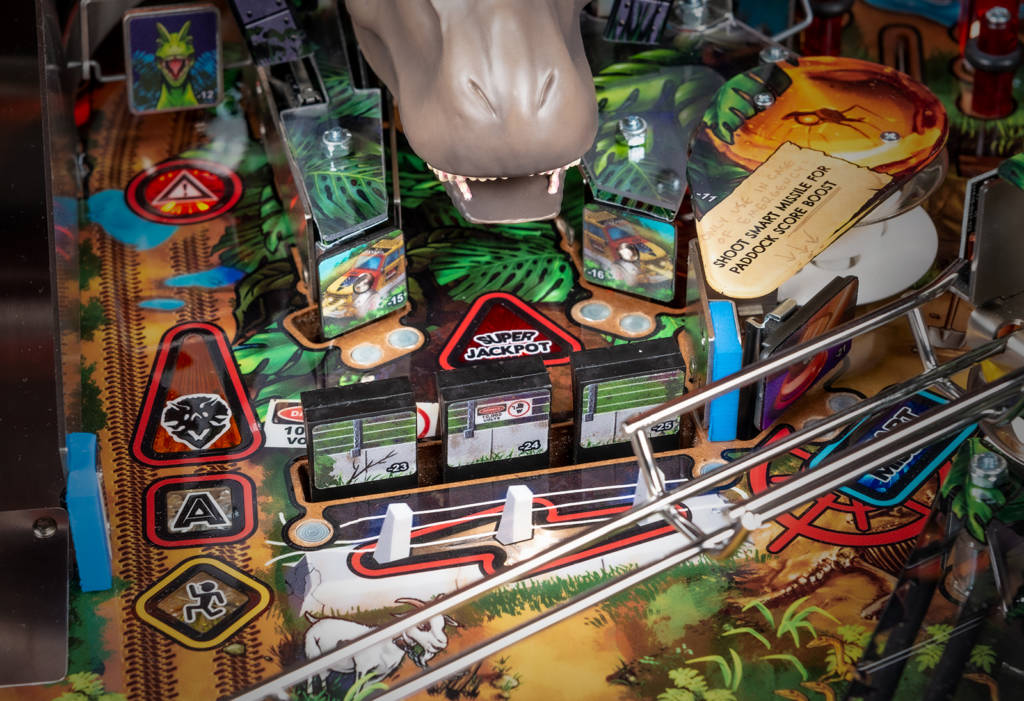 As the game is not intended to be operated, there is no space for a pricing card on the bottom apron. Instead, we find the rules for the game. Most ‘Pin’ models have rather simple rules, but it looks like Jurassic Park Pin has a rather deeper ruleset. 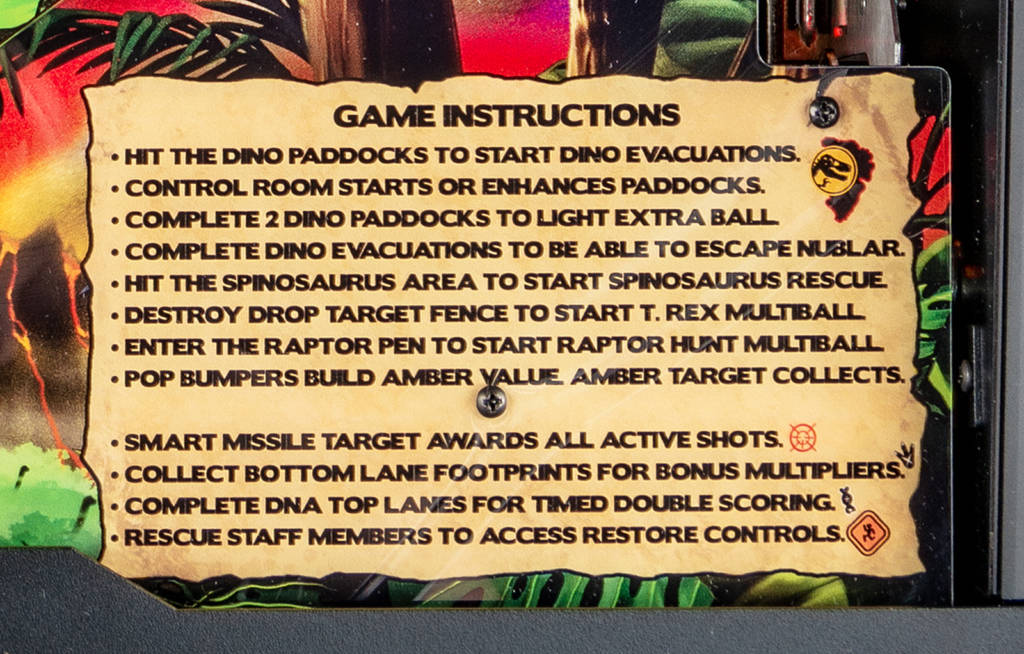 The rules for Jurassic Park Pin

The game is planned to go into production in November in time Christmas or holiday season deliveries to customers.

There is also a promotional video available:

There is also a longer video which explains the game’s rules:

Finally, game designer Jack Danger will be streaming gameplay from the Jurassic Park Pin on Friday 16th October at 6pm US Central Time on his Dead Flip Twitch account.