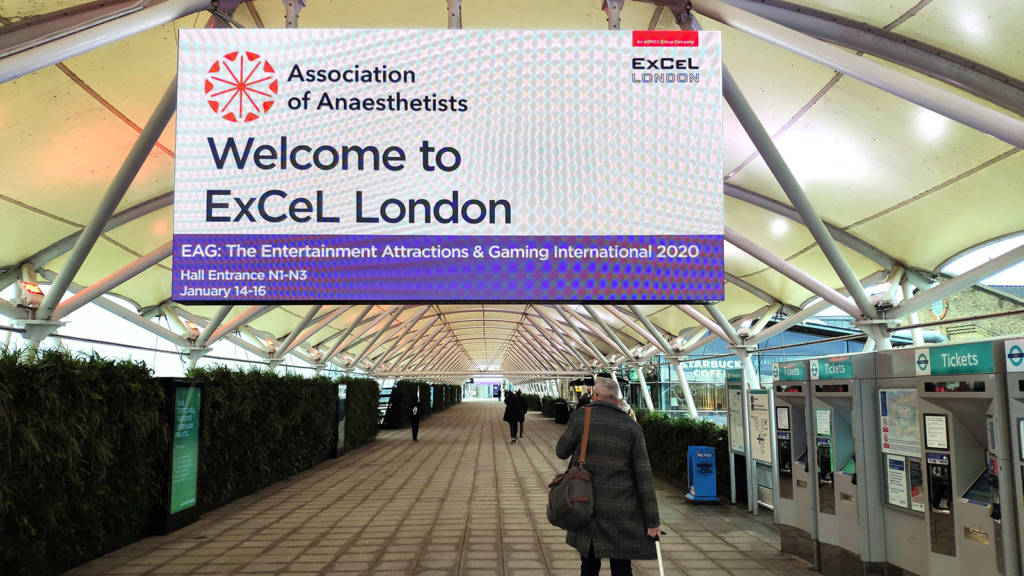 The walkway to the ExCel London exhibition complex

The venue hasn’t changed for many years, although the exact halls within the ExCeL London exhibition complex where the show is held has varied a little. For 2020 we are in halls N1-N6. 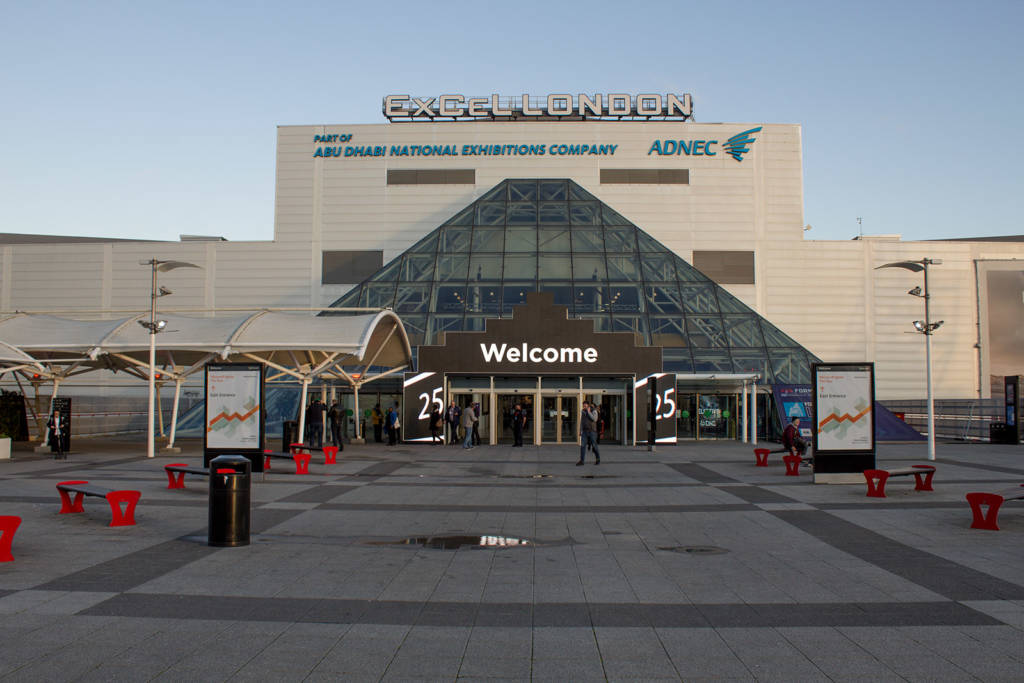 In all honesty, 2020 was rather light for pinball at EAG with only Stern Pinball exhibiting, courtesy of their UK distributor Electrocoin. Previous years had seen Pinball Heaven with a stand featuring machines from Jersey Jack Pinball, American Pinball and Chicago Gaming, but they were absent this year. 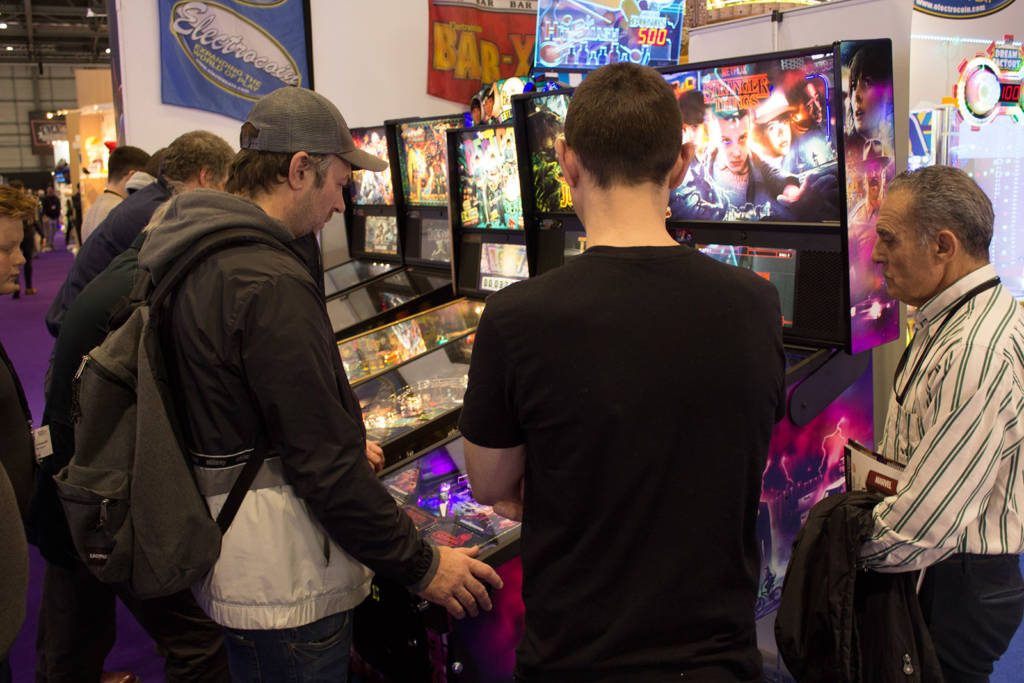 The Stern pinballs on the Electrocoin stand 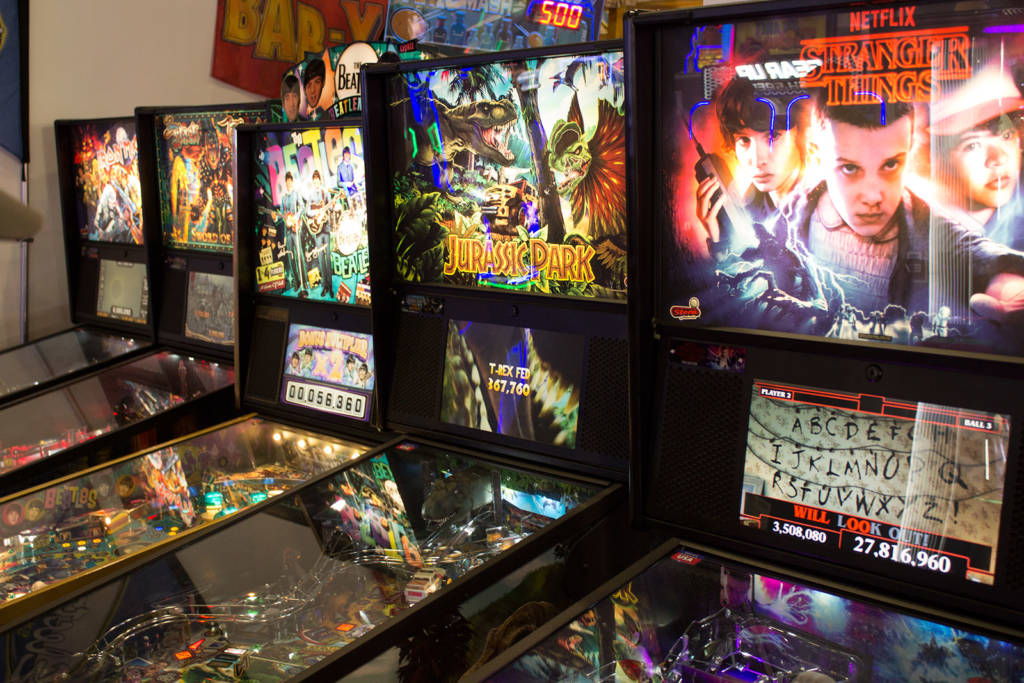 Stern did in fact have another machine with them, but it was located in one of the upstairs conference rooms and only shown to certain guests at pre-arranged times.

This was a Stranger Things Premium model with the projector feature, and it was clear Stern Pinball’s team wanted the game exhibited in favourable lighting conditions rather than down on the show floor. 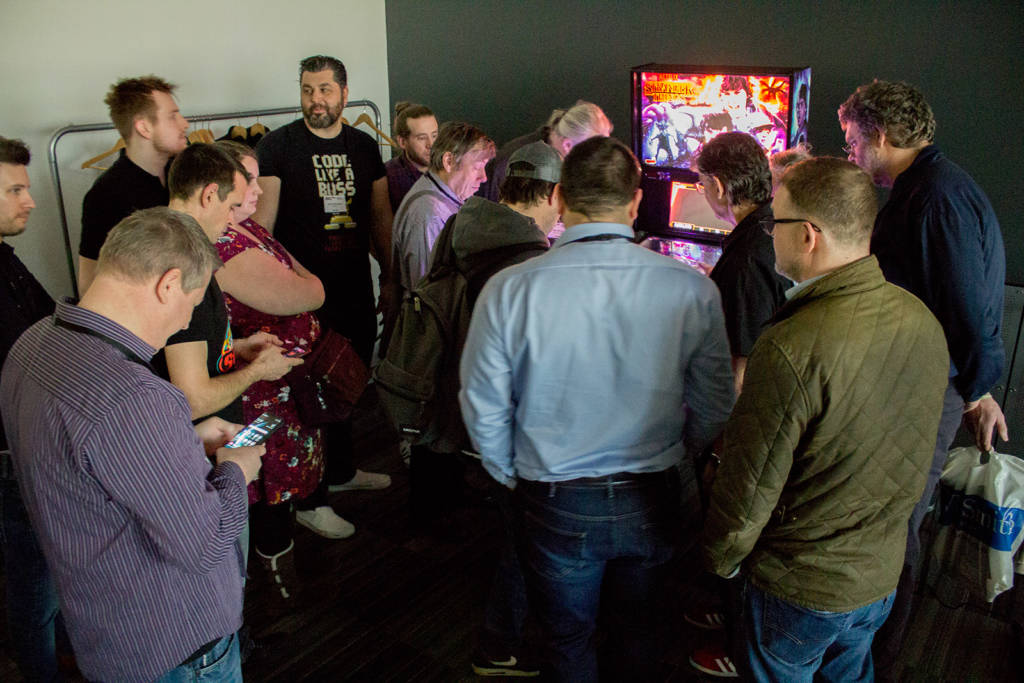 You can see that the Premium and Limited Edition models would certainly benefit from being placed in a darker environment – that’s the nature and the limitation of the projector mounted under the bottom apron – but it’s an innovative idea filled with possibilities and certainly not something to be overly sensitive about. Even with the normal conference room lights on, the projected image was perfectly acceptable.

George Gomez explained to us how the magnetic ball lock on the back panel doesn’t use an electromagnet but uses a permanent magnet instead. This requires no power and thus avoids any danger of overheating when holding the balls for an extended time. Releasing the balls is achieved by a motor which simply moves the magnet backwards, away from the panel.

How the game’s rules will manage the locked balls between players and between games is still being decided.

George also explained how there are additional controls in the Stranger Things set-up menus to adjust the alignment of the projected image so the screen, target and spinner artwork is projected onto the appropriate part of the playfield. The projector itself is fixed to the playfield, not to the bottom apron, so the alignment shouldn’t drift too much.

Stern will be releasing video of the Premium model in action shortly and didn’t want us to take any detailed pictures, but here’s a quick glimpse at the playfield with the projector on the screen, spinner, left ramp, drop targets and standups. 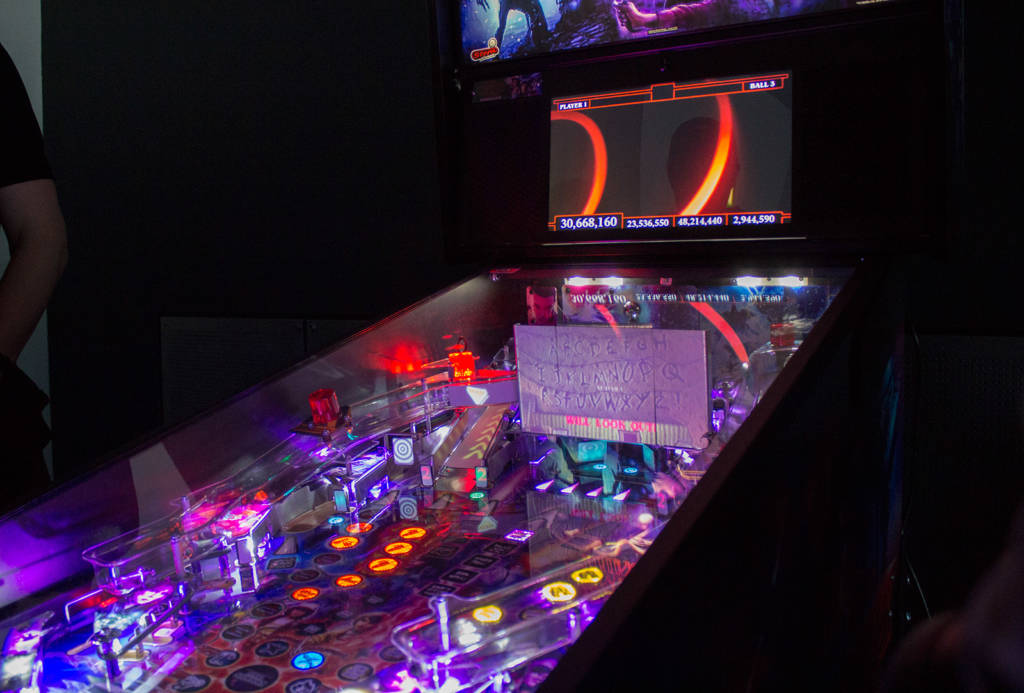 The team from Stern at the show consisted of John Buscaglia, Gary Stern, George Gomez, Doug Skor and Dave Peterson (who wasn’t at the demonstration). 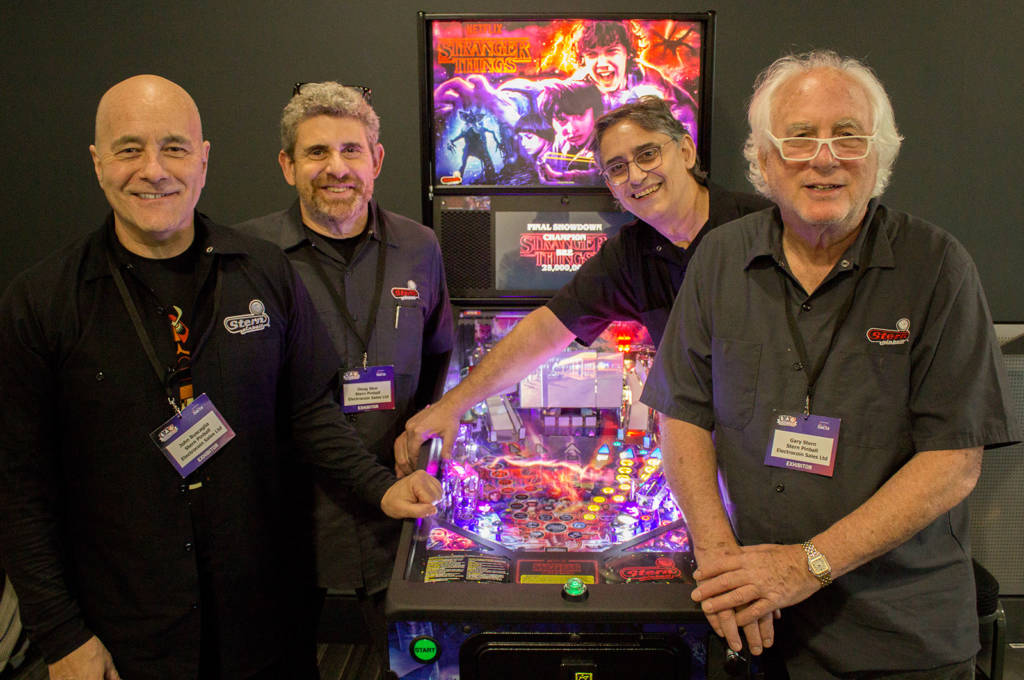 Elsewhere at the show there were only the usual kids prize dispensing mini-pinballs on the Cool Things and All Things Nice Vending stands. 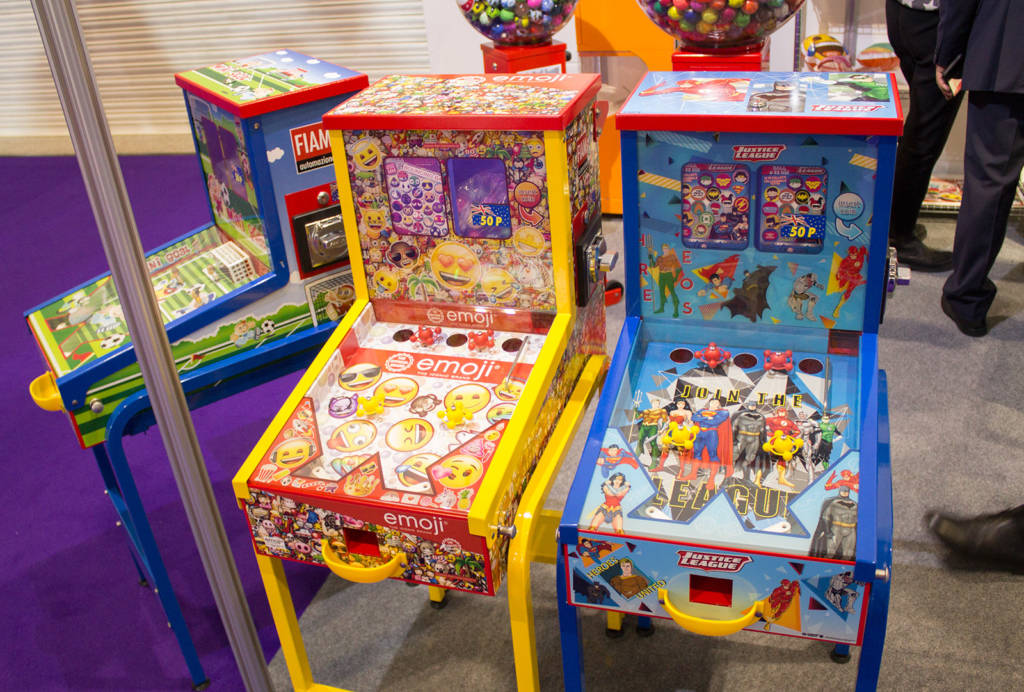 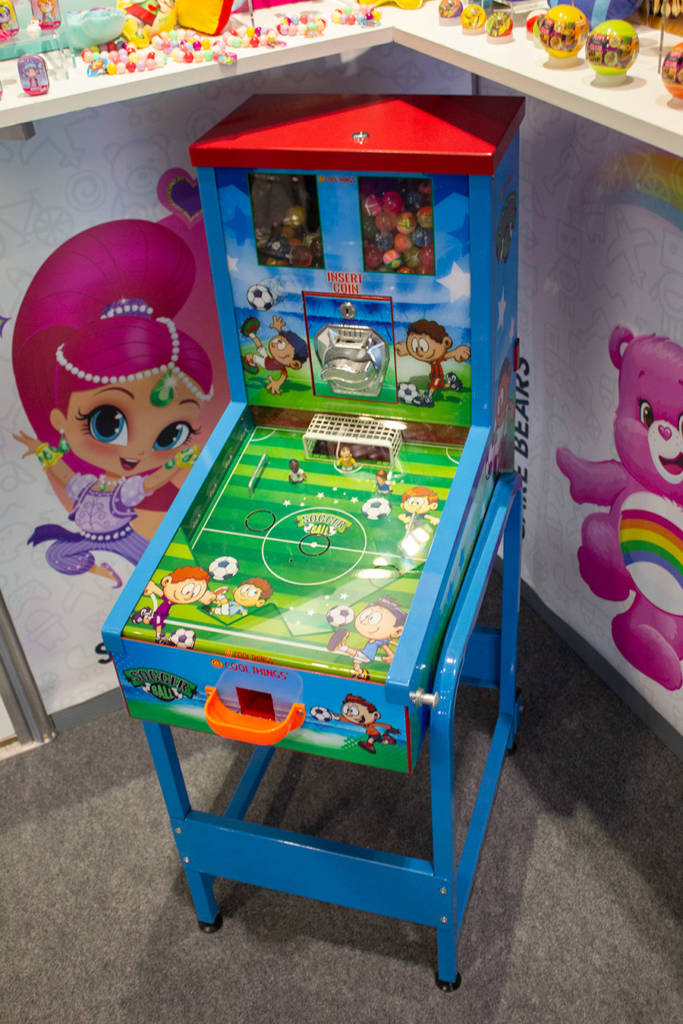 Actually, there was one more pinball found hiding on another vendor’s stand. 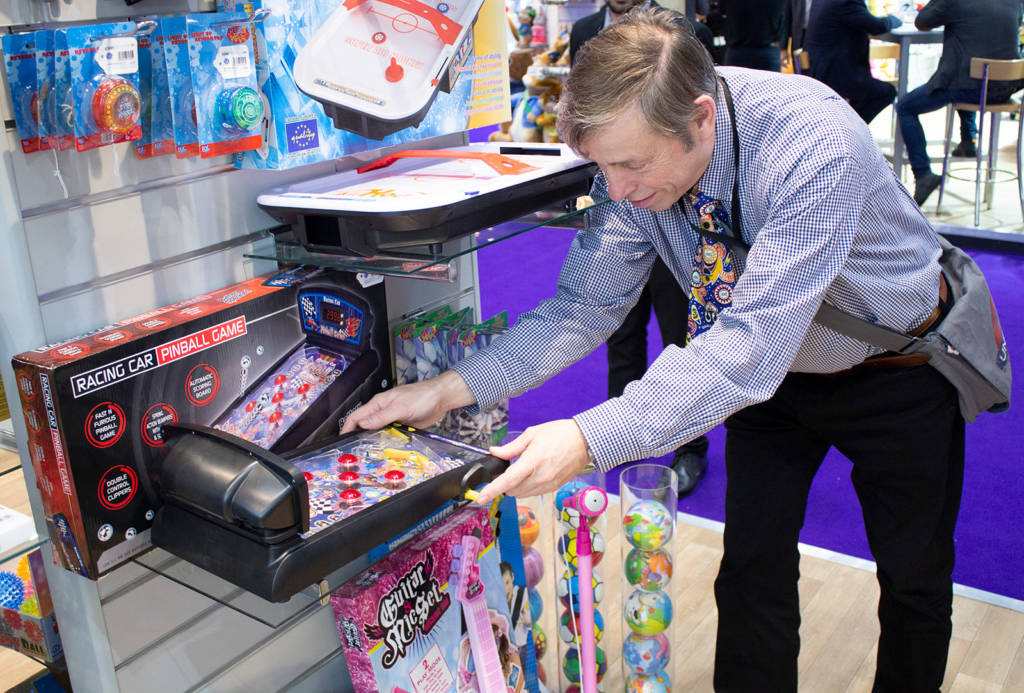 Pinball did turn up in a couple more places. A sign vendor uses a pinball sign to demonstrate their lighted etched-acrylic products. 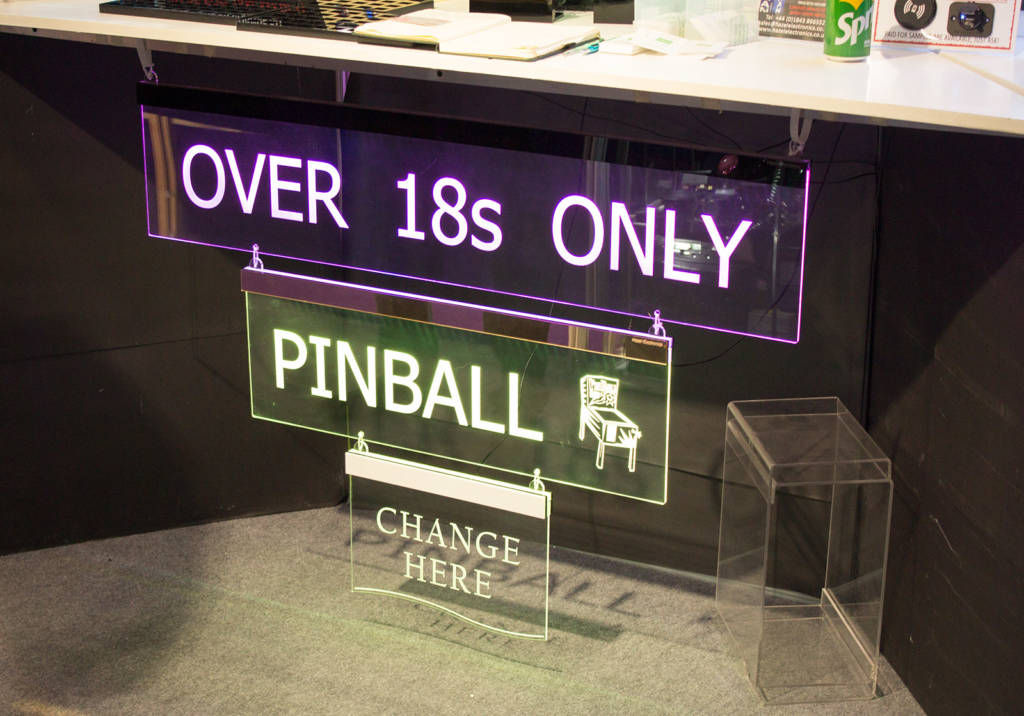 Finally, the current issue of InterGame magazine features an article and cover story about pinball resurgence. 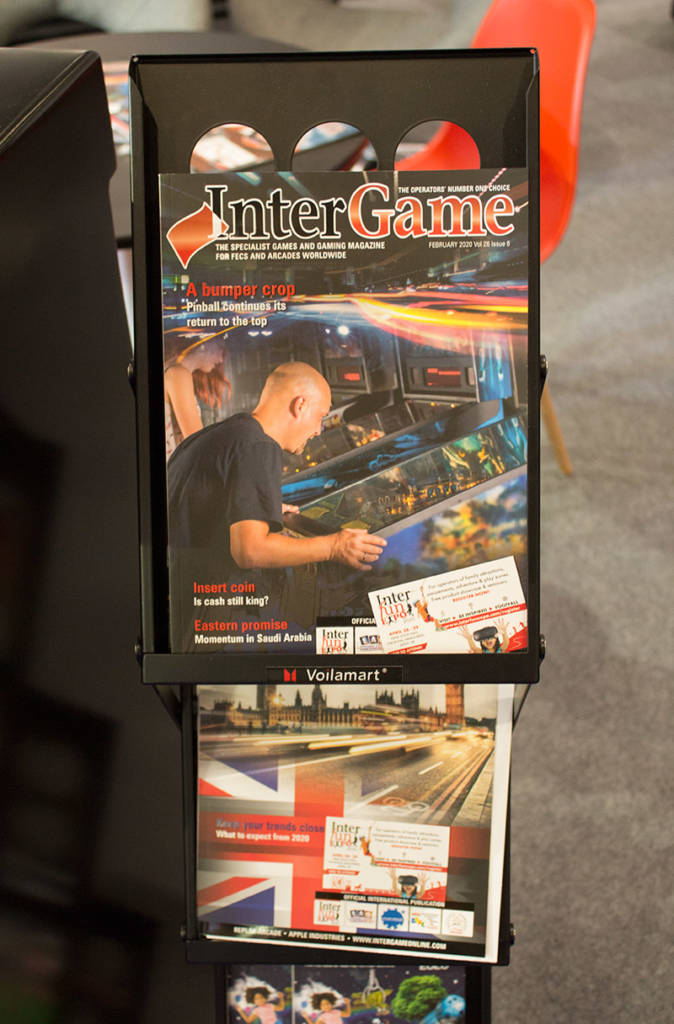 Looking around the rest of the show, several themes used in pinballs were on display in various forms with one stand having quite a collection of mugs. 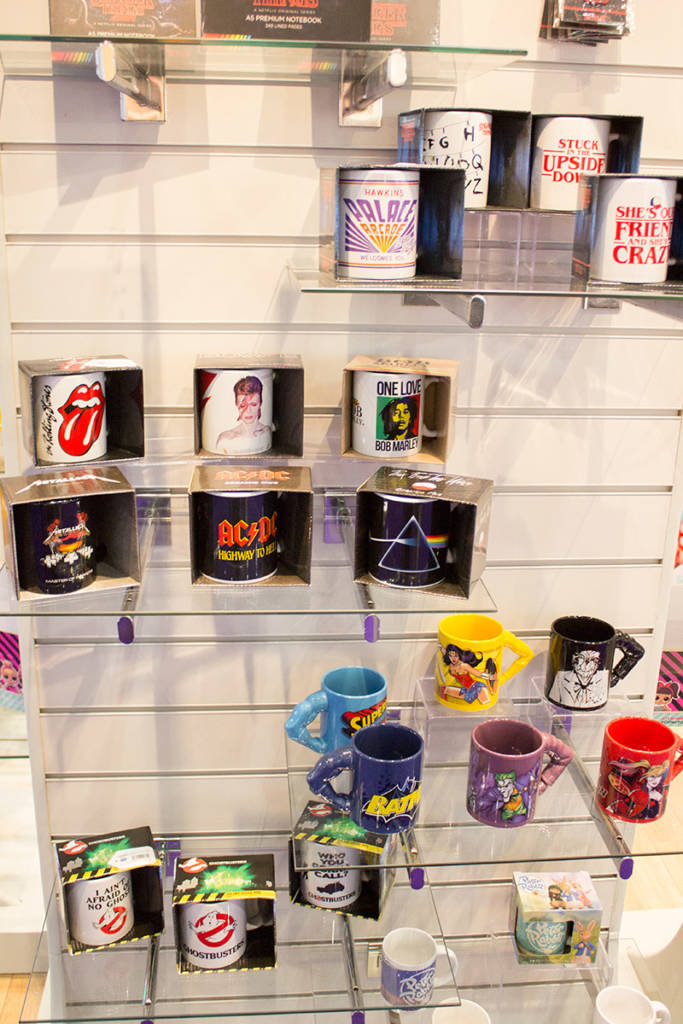 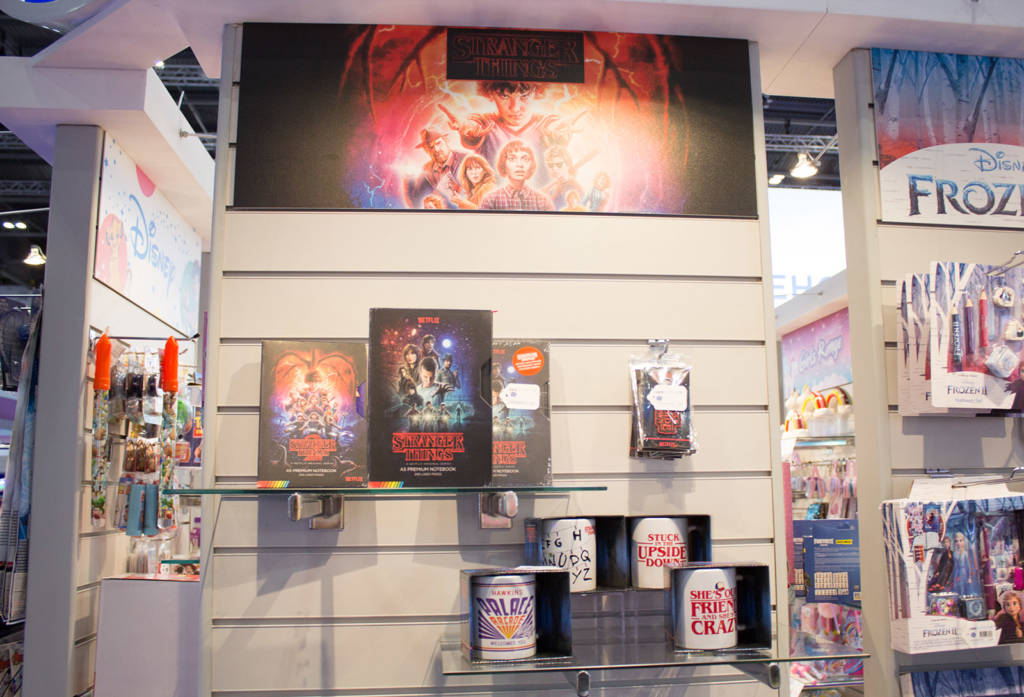 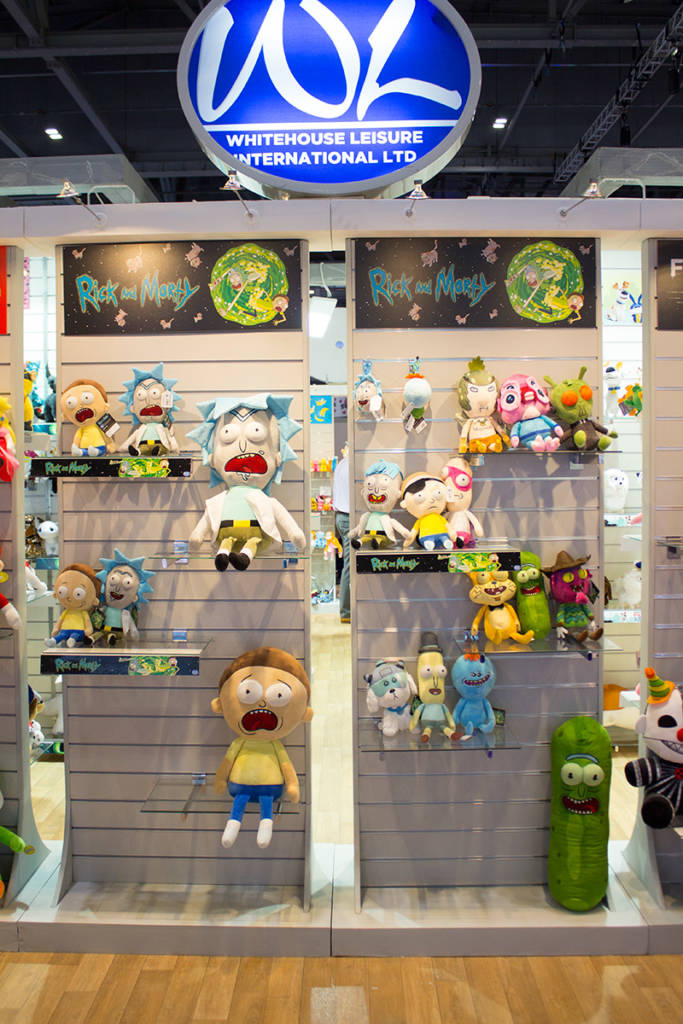 Rick and Morty were here too

So, what about the rest of the show? We went looking for the latest technology or trends which might make it into pinball machines in the future, but in all honesty it was hard to find much we hadn’t seen before.

Virtual Reality seems to still be a thing, with large VR arenas attracting plenty of attention. 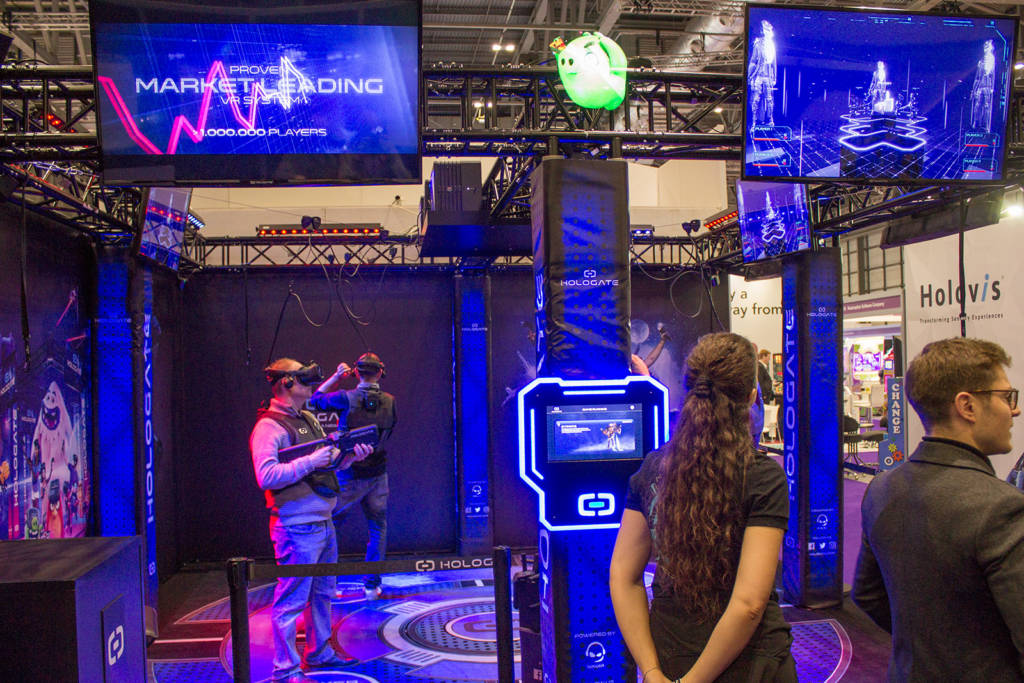 The first of two VR arenas 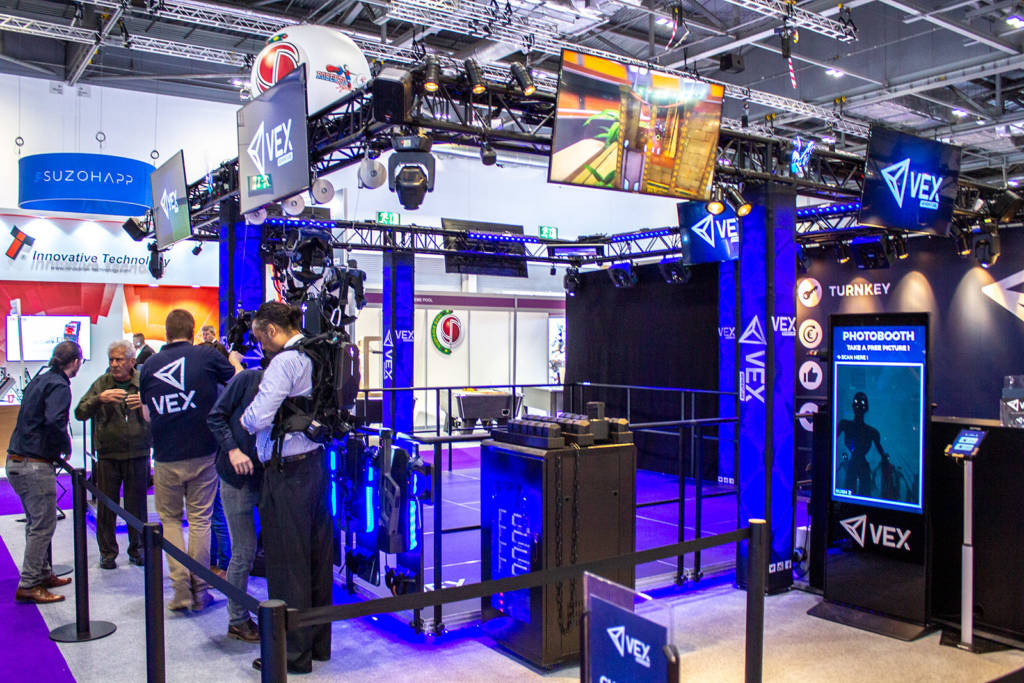 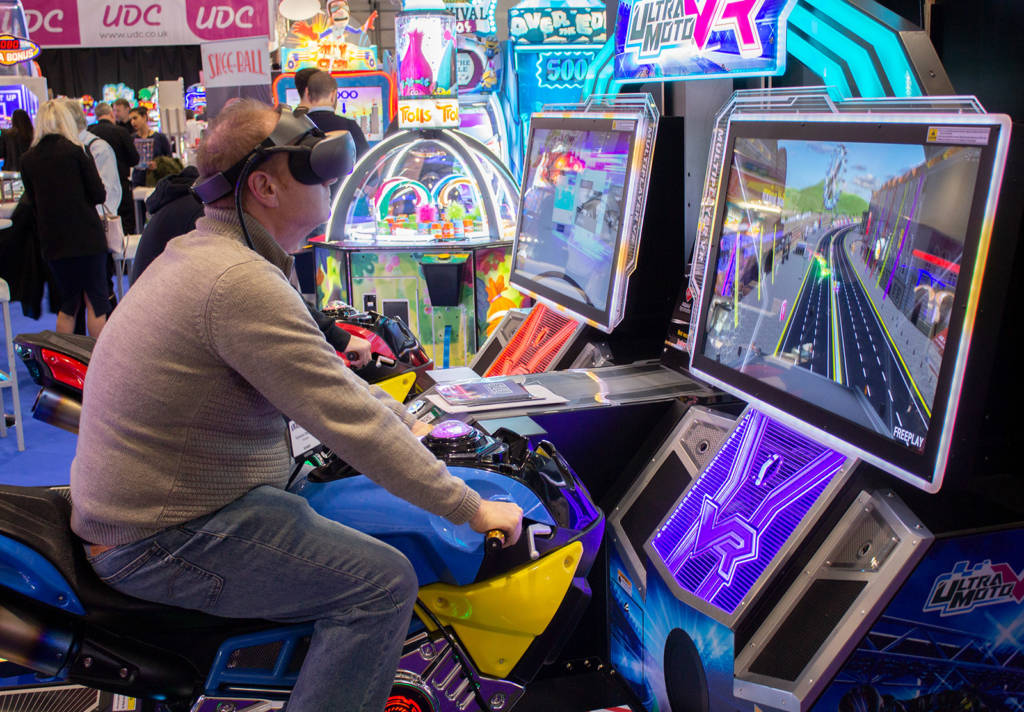 Redemption games where you slide an object along an air-hockey-like track to win tickets seemed to be a new trend. One such game had a pinball-like plunger, making it one big ‘skill shot’, while another used miniature trucks from Jurassic World. 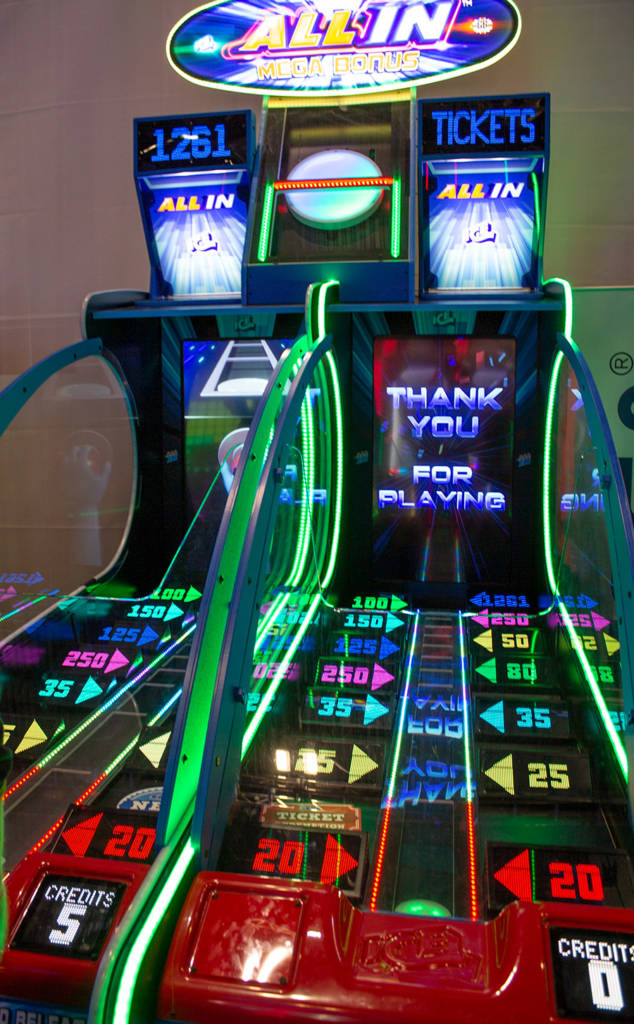 Slide the puck along the track to win 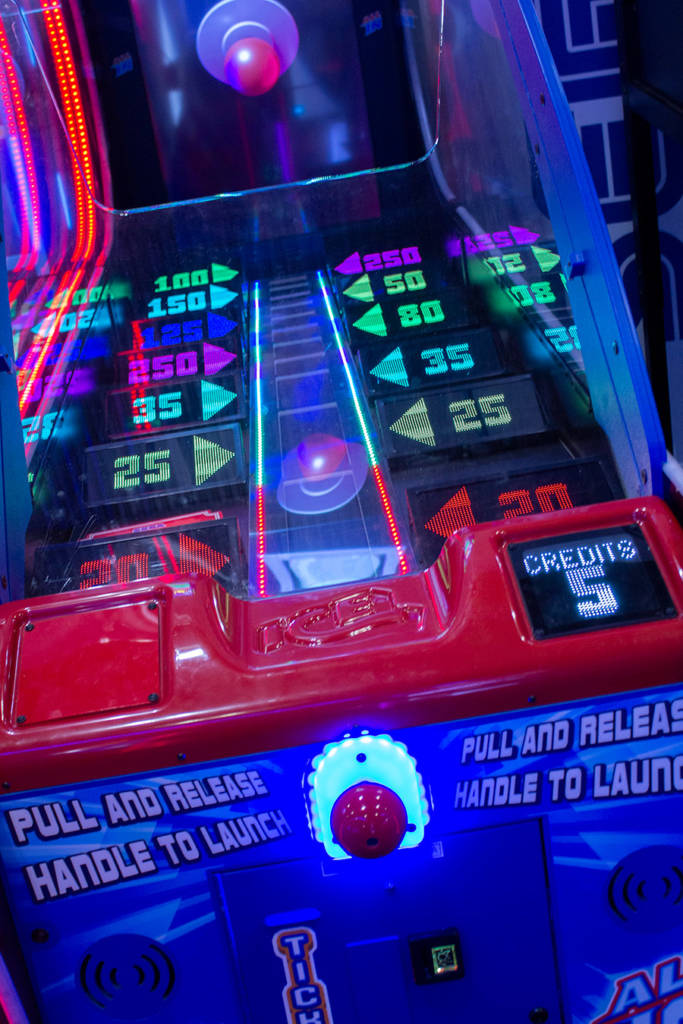 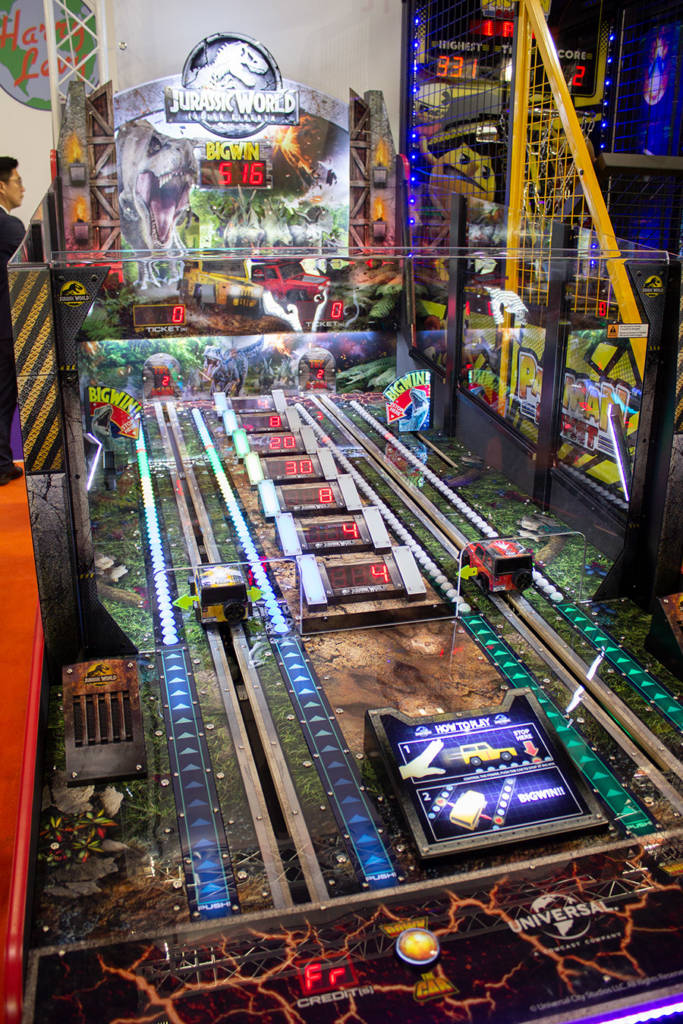 A different take on the same idea

Like the redemption pieces above, creating over-size games still seems the preferred way to give the kind of gaming experience you can’t get at home. 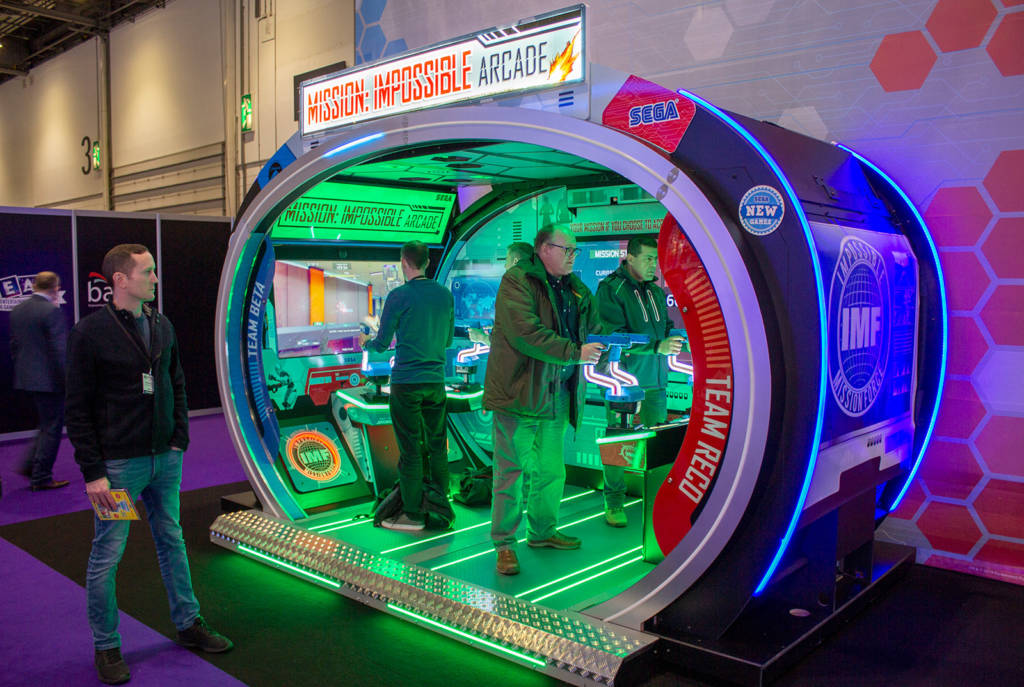 Mission Impossible could also be a good pinball theme 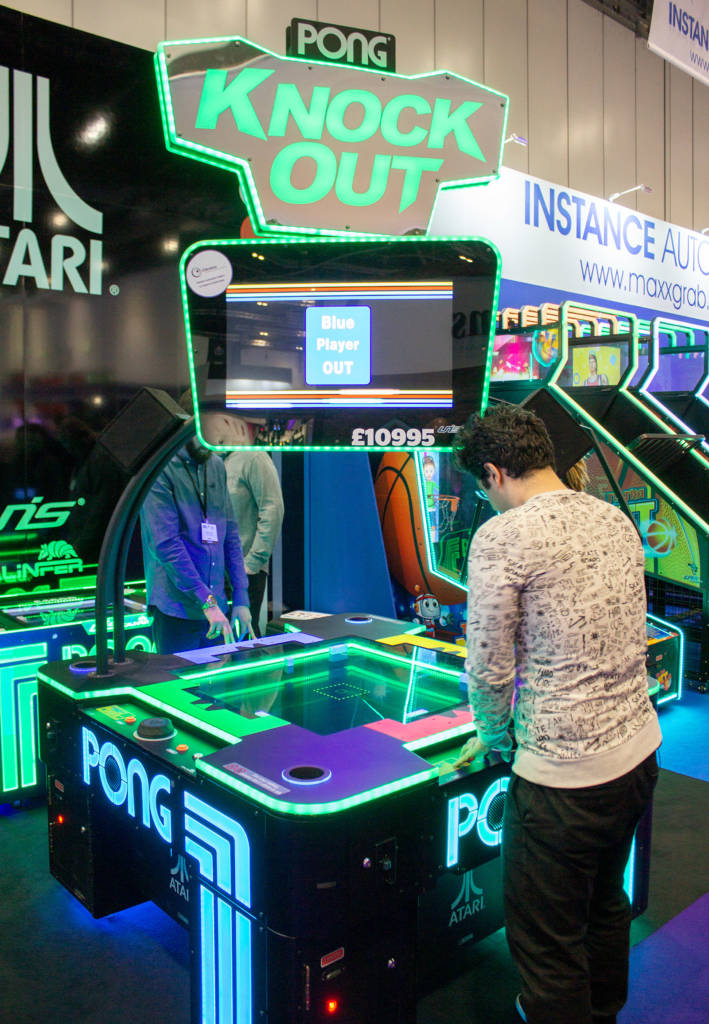 Even the show security had been scaled-up this year. 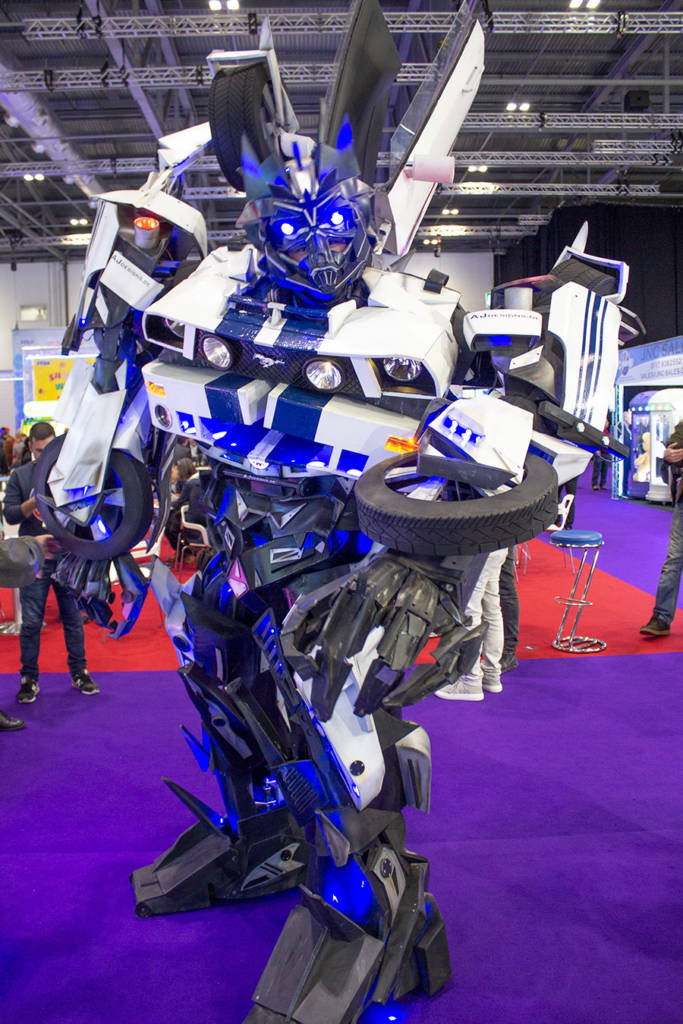 Mostly though, EAG featured hundreds of traditional arcade, FEC or theme park amusements such as coin pushers and kiddy rides. 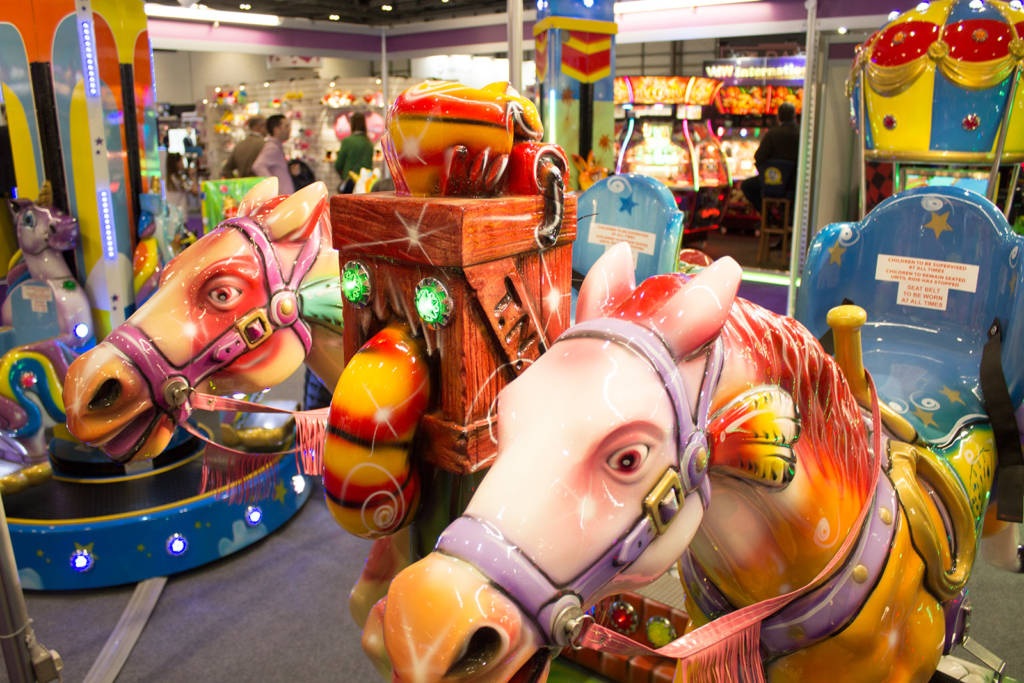 The traditional bright colours are now augmented by garish LEDs 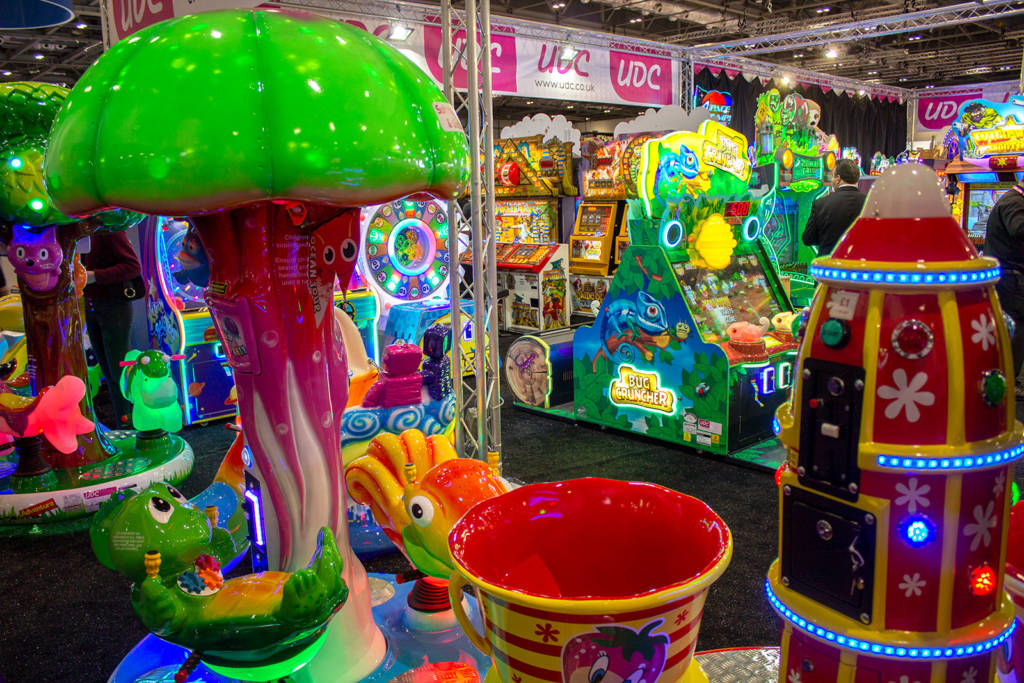 The traditional rides are still popular with the youngsters 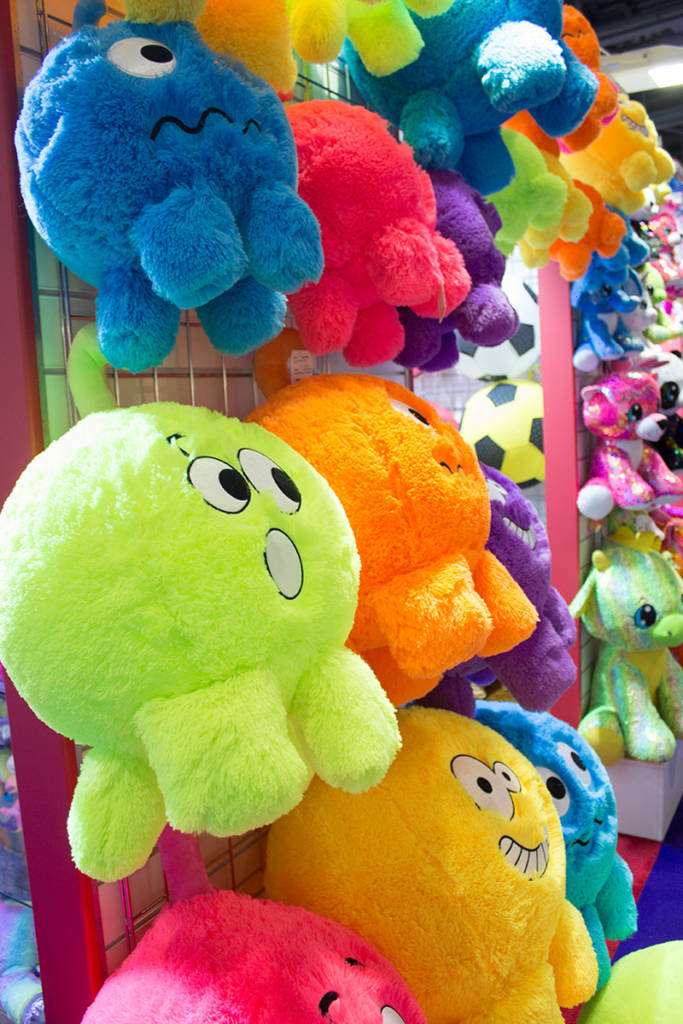 Vivid colours were on show everywhere 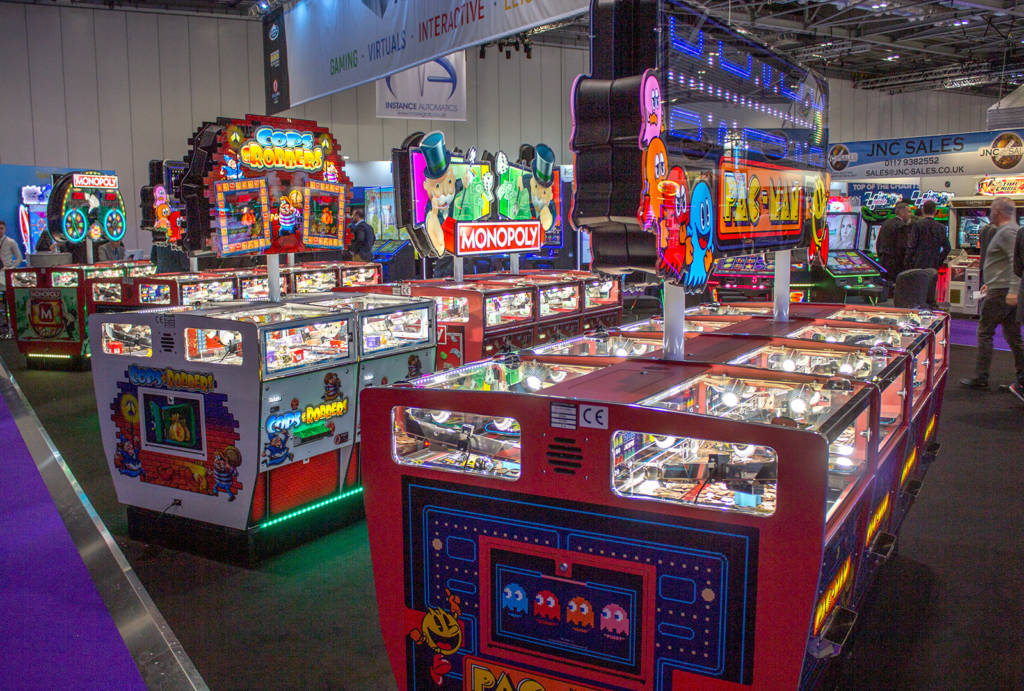 Coin pushers, such as these from Inspired, continue to appeal to players

EAG had some busier times – in particular around lunchtime – but overall it was fairly quiet, making it easy to try out any games you wanted. 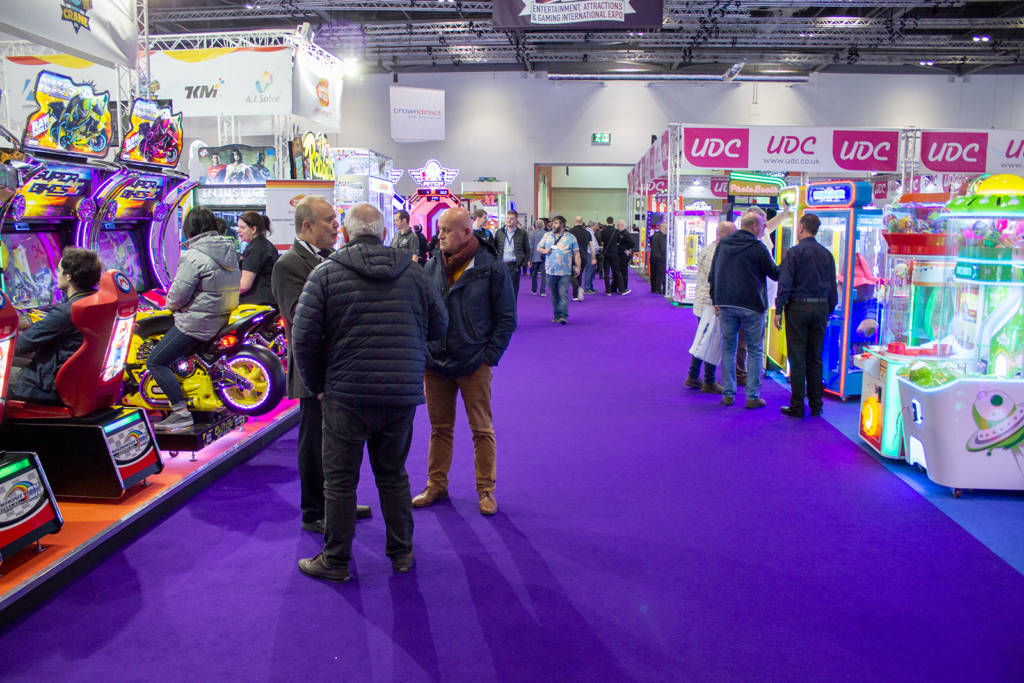 This was about as busy as it got 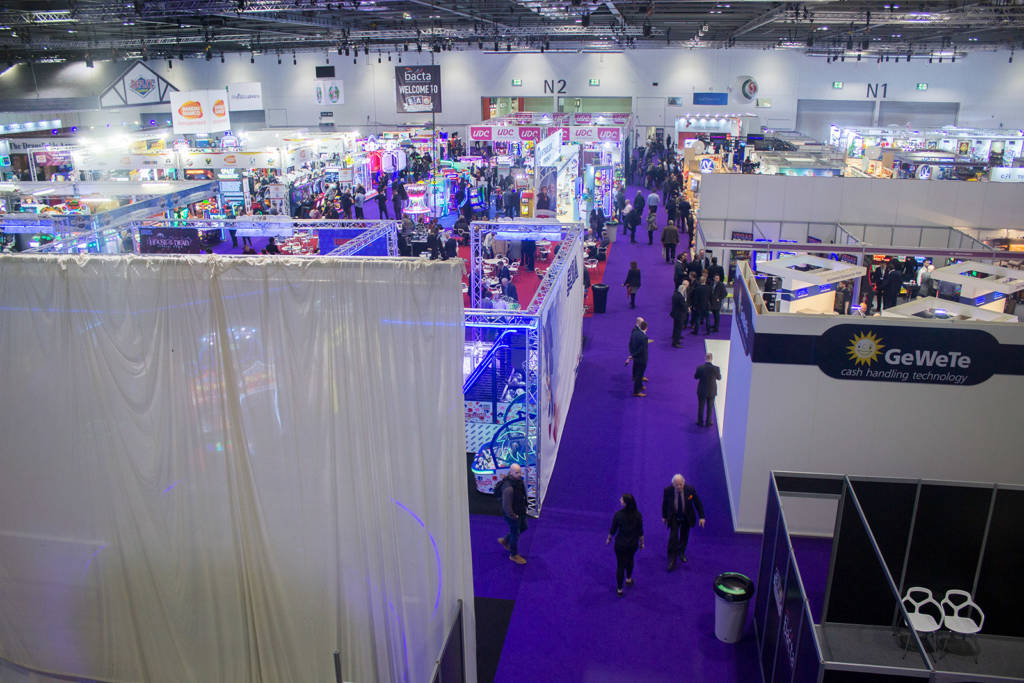 An overview of the show

That brings our coverage of this year’s EAG International Expo to an end.

Despite the lack of other pinball manufacturers, it was good to check out Stern Pinball’s latest titles and especially the Premium version of Stranger Things. It was also slightly disappointing that there were no real innovative products on display at any of the vendors’ stands, with most new products being developments or updated versions of existing ones.

Nevertheless, it was nice to see current state of the coin-op, redemption and casual gambling industries and have some fun try out some of the latest releases, all on free play.

As usual, we’ll end with our exclusive Twenty-One Minute Tour video walk around the show.