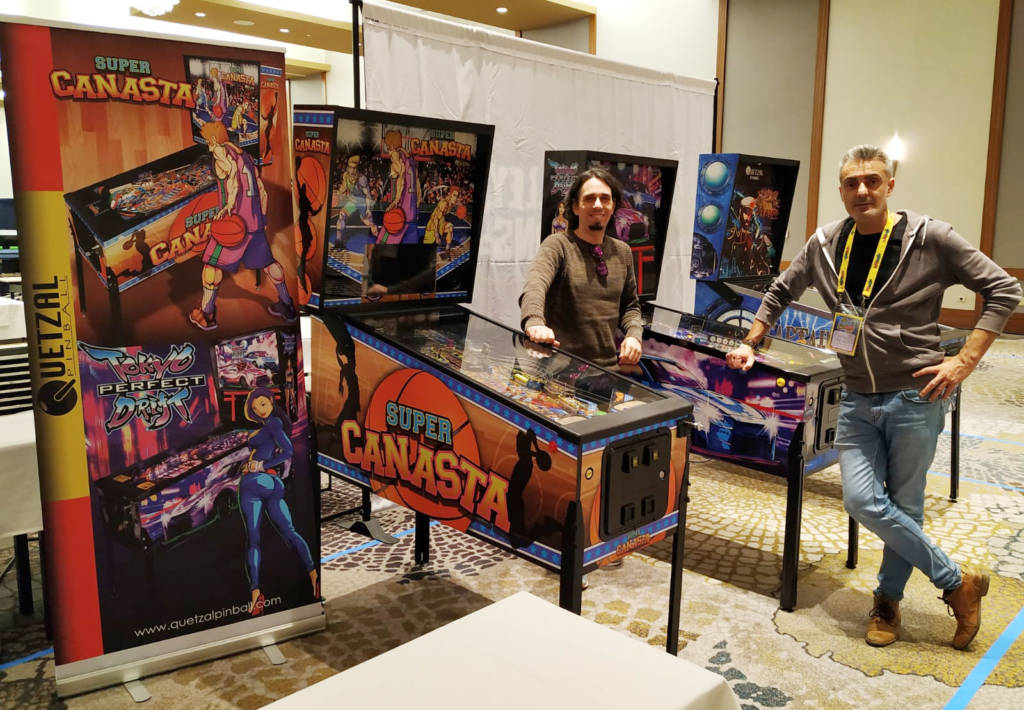 Quetzal Pinball’s Antonio and Gustavo with Super Canasta, Tokyo Perfect Drift and Captain Nemo
Canasta (Spanish for ‘basket’ or ‘hoop’) 86 was a very popular game in Spain, earning good money both for operators and for the manufacturer, Inder. The title, theme and layout were revised in 2010 by MarsaPlay with their New Canasta game, but that never gained any traction due to the high price and unreliability.

Quetzal Pinball were contacted by the company Bitronic, who build slot machines and various coin-operated amusement devices in their factory in Murcia, Spain, and asked to design a pinball for them to build which would be modern in appearance but require minimal maintenance in order to appeal to operators.

Antonio OrtuÃ±o, who founded Quetzal Pinball, told Pinball News why they brought back the Canasta brand. He said, “Quetzal had total creative freedom and, considering the operators market, we decided to create Super Canasta because basketball is a popular theme for bars and pubs. In Spain, the pinball Canasta 86 was very successful and everybody remembers it, especially operators who made a lot of money with that pinball.“

With the decision made to create the basketball-themed game, work began on the design. Antonio explained the process.

“The starting point for the design of the playfield was the hoop – it is the protagonist of the pinball and would be in the centre of the playfield. Almost immediately a third flipper was added, with a split ramp to do upper loops and a magnet which would capture the ball and do a “slam dunk” to increase the number of shots to the basket.“ 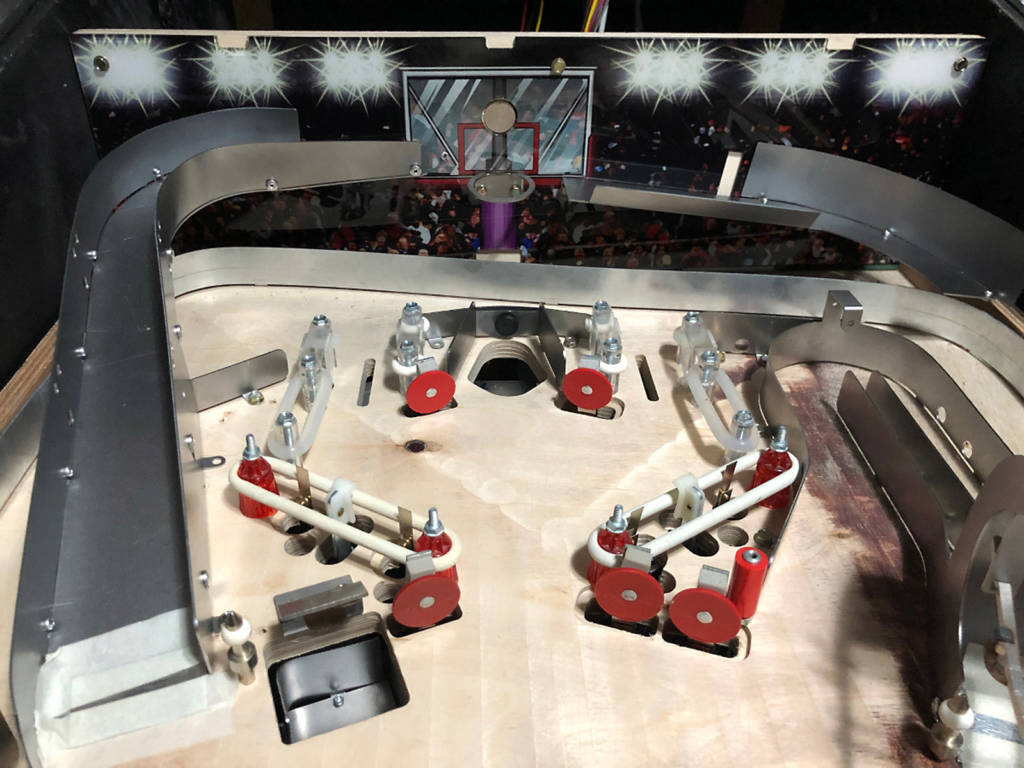 A prototype of the basket area
Antonio explained how the initial design for the centre shot involved a moving ramp, but this idea was subsequently discarded because it added unnecessary complexity to the playfield. Instead, this evolved into a mini-playfield area containing two player-controlled slingshots, working as ‘rebound’ feature.

Having player-controlled slingshots at the top of the playfield where they might not be obvious and could be overlooked was a challenge for Antonio. He said, “To explain the player that he controls the upper slings was essential, so I added a moving hands to the slings which proved to be very effective.“ 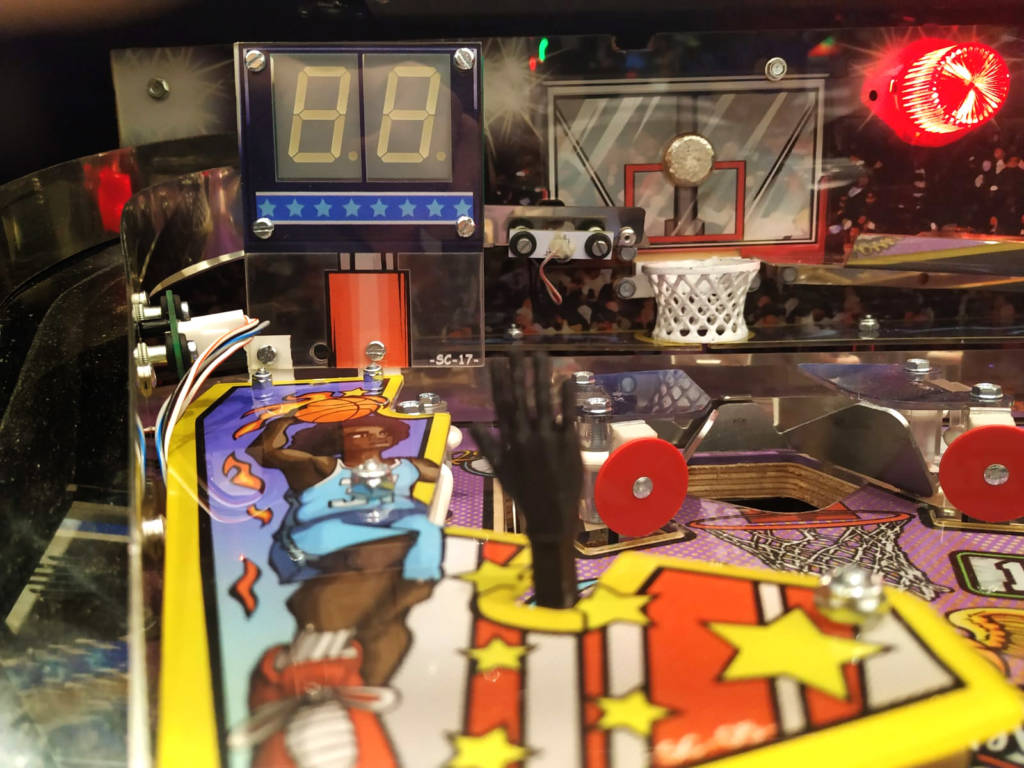 The finished basket area with the player-controlled slingshot hands
Assisting Antonio in the design of Super Canasta was Gustavo ‘Lord Hiryu’. In addition to being a consultant and participating in the game design brain-storming, he also created all the artwork and display animations, just as he did with Captain Nemo and Tokyo Perfect Drift. 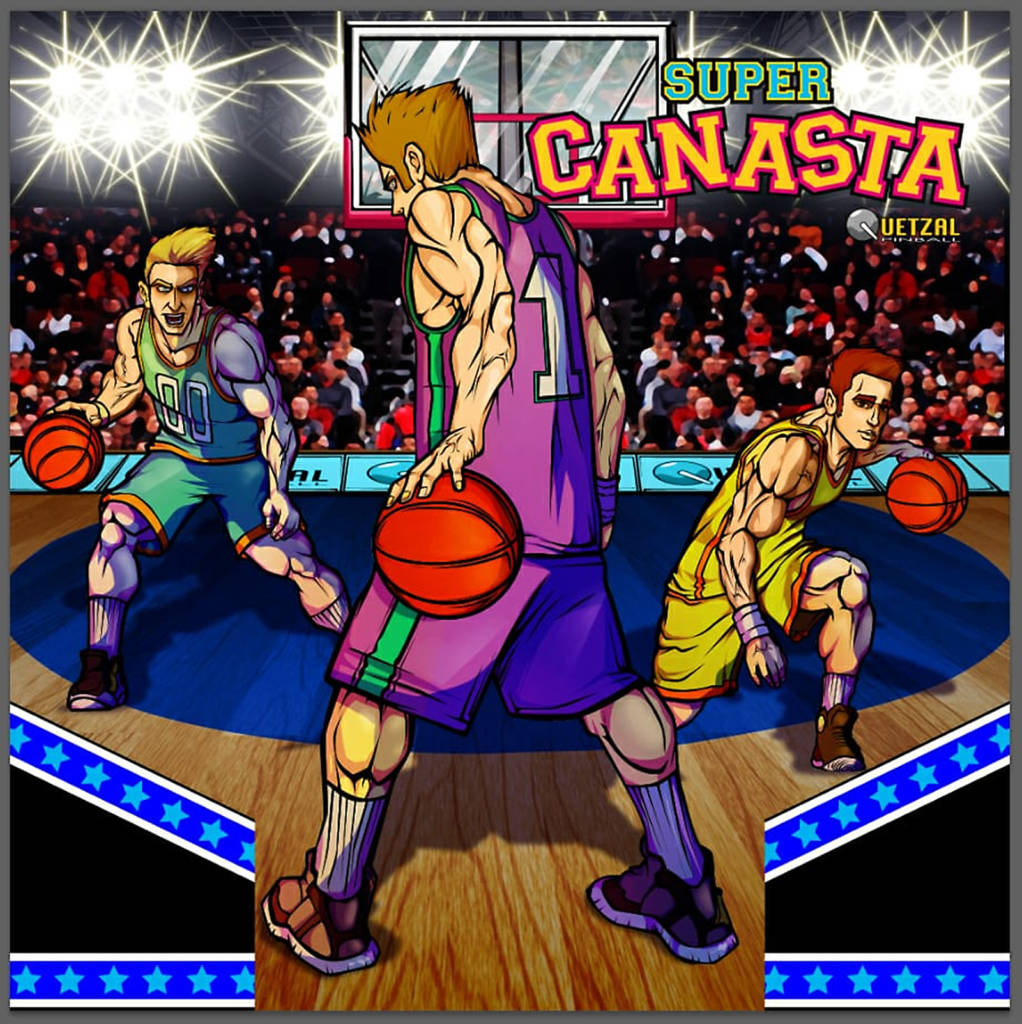 The Super Canasta backbox artwork
Antonio described the comic-style look of the game as, “more casual and dynamic, with lot of movement“. 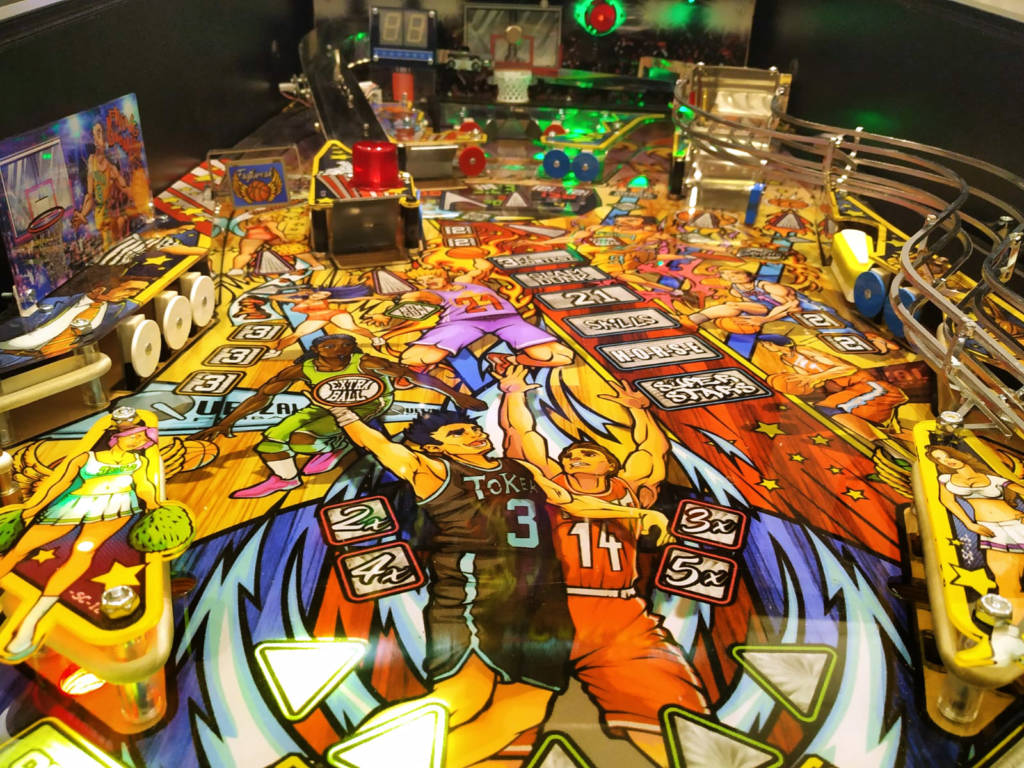 The playfield artwork
The music for the game was composed and played by Disaster Surrealism, a Spanish rock music band. Antonio thinks that their style of music perfectly complements the casual style of gameplay. 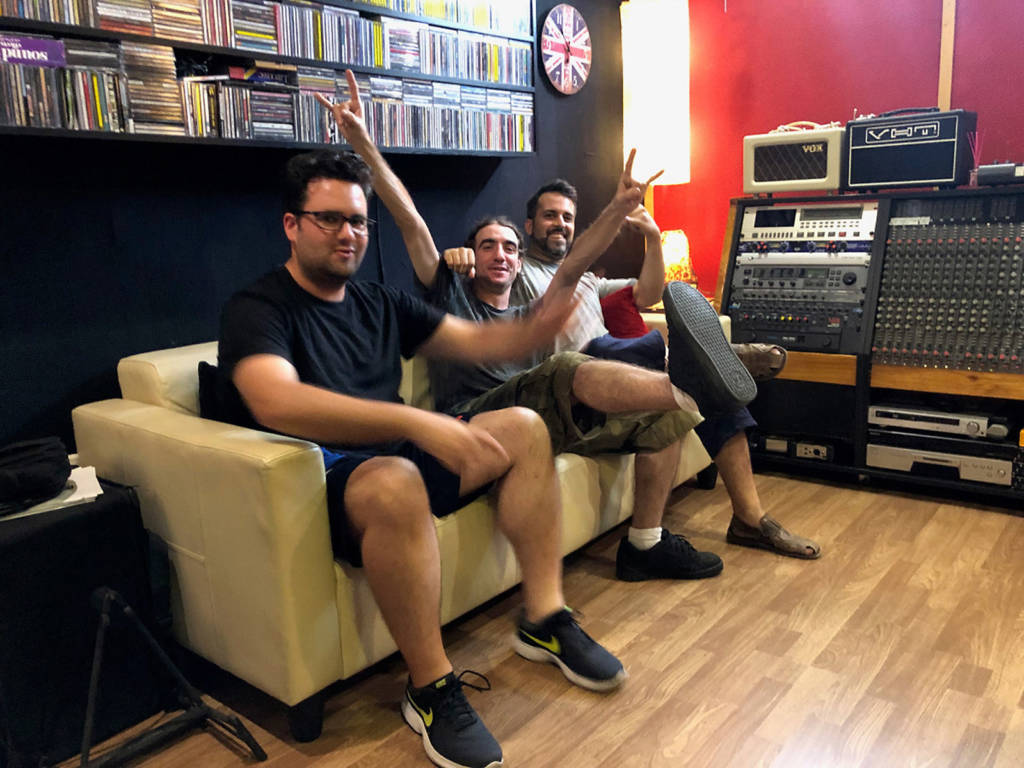 Disaster Surrealism in the recording studio
The game features relatively simple and understandable rules, with six modes, a multiball and several shot combos.

Quetzal Pinball’s Super Canasta game is scheduled to begin manufacturing at Bitronic facility by the end of this year, and will be priced at â‚¬4,200. 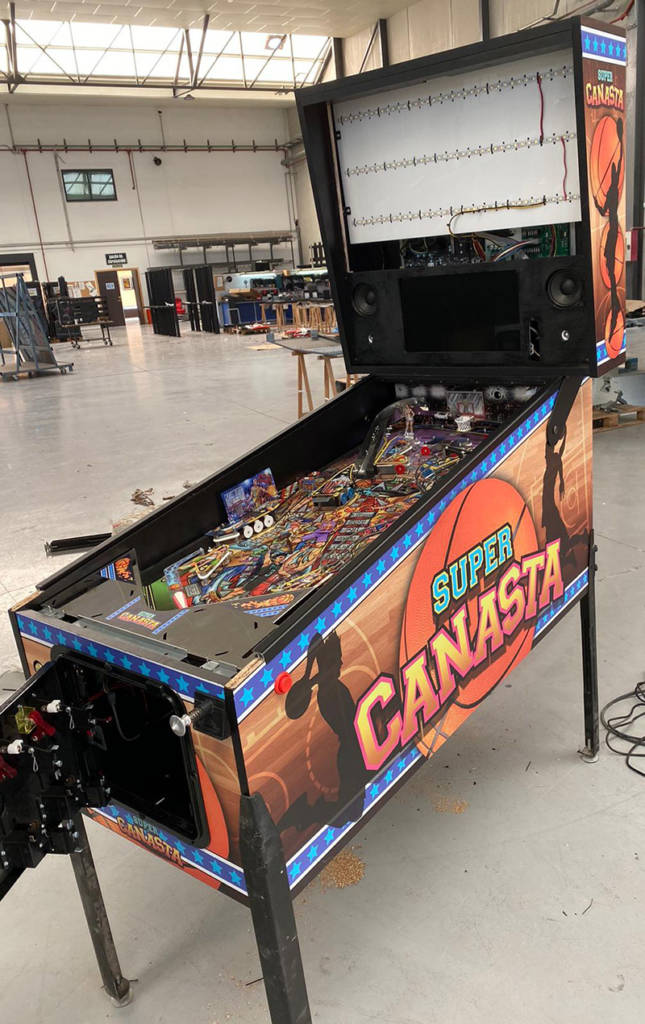 One of the prototype games in the Bitronic factory 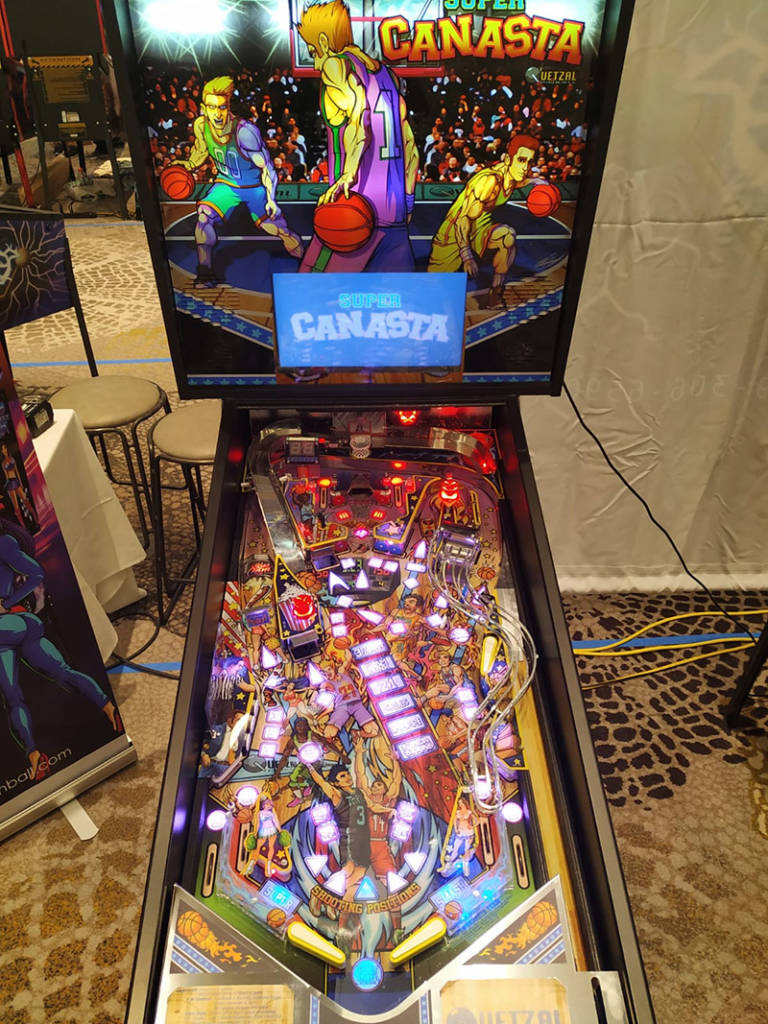