Version 1.4
Added JP's Lut's script.
Press and hold Left Magna-Save, then press Right Magna-Save to toggle the different Lut's.
I moved the bumper pics to "L" key, and FS Backdrop pics to "K" key, as these were assigned to the Magna-Save keys previously.
If you click the Backdrop, and Options button in the editor when table is loaded, you can set the table to your desired Lut image on right side of editor, and then save table so this will become your personalized default Lut image.

Version 1.3
Moved plunger activated sounds to trigger in plunger lane.
Added JP's GI Effect script, so GI Lights blink with certain events.
(Plunger release, and drop targets activate GI Effect.)
(This proved to be really hard to implement on this table, because there are only GI Lights above the plastics, and below the plastics is lit up with a lightmap.(Basically like Shadows layer added to a flasher, except this is the GI lighting instead of shadows.)
So I had to add timers and call for the visibility of the flasher to match the GI Effect script.
Added GI lighting to DT Backdrop.
Added coin being inserted sound effect, into sound manager and implemented it. (Dropping of quarter in coin box.)
Added drain sound effect.(This sound was in sound manager but not tied to drain.)
Tied upper 2 flashers to bumper hit.
Changed height of drop targets from 1 to 0.01,(Tops can still be seen when dropped.)
Connected adv left and right bonus to red and blue flasher.
Adjusted sides of the flashers above plastics.(So they are not seen off table in DT mode.)


Version 1.02F
Fixed Shoot Again light on playfield, as it was lighting up when 2X light was on.
(Timer Interval was set to 34, same number for 2X light Timer Interval. I just set it for 1 and now it lights up correctly when you get extra ball, and not when 2X is lit.)

Fixed timers on in game rollover sound effects, so there is half of a second between each one, so none will overlap.I found a few that were set to 1 second timers, and they were 5 second sound effects. So this problem is fixed.


Version 1.01
Fixed timer on target6 timer. Changed from sw42 to Drain timer. It was activating launch sound effects after multiball.
Added new Instruction Card with slightly bigger resolution. (I didn't make this for frontend usage, as I don't own a cabinet. It is mainly for DT users who want to read actual instructions.)
Corrected info in Version 1.0 that I forgot to update before uploading.
(I reduced the amount of bumpercaps from 15 to 6 as alot of them didn't look good enough. I just forgot to update info before I uploaded version 1.0.)
Added 2 nvram files. One for 5 ball and one for 7 ball.
(Copy nvram into nvram folder where Visual pinball is installed. To go back to 3 ball just delete the nvram.)
(Thanks to Johngreve for asking this question, and thanks to Allknowing2012 for linking to ball adjustment tutorials made by ta2686!!)
I also ran across a post by Steve (Slydog43), asking DarthMarino in his drop target table mod support topic, about seeing top of drop target when in dropped position. So...
I raised the drop targets, So now you can see tops when dropped. (Thanks Steve!!!! Looks more realistic!!)
Added 4 more bumper pics. (another Cylon ship, a Cylon basestar, the Battlestar Galactica ship, and a cylon.)
Added 26 more sound effects mostly triggered by lower rollovers.
Added 2 more Background music sound effects. One is triggered by plunger pull, the other is a disco version of theme played during attract mode.
Added cylon sound effect to lower 2 targets, sw49(right lane to reach top of table), and kickers.


Version 1.0
I used Allknowing2012's 2.1b version to make this mod.
Removed Sidewood and Topwood image from being visible in FS view.
Changed Light l18 to enable bulb. (Noticed this light was brighter than rest, so found the cause and fixed.)
Tucked in metal wall under apron near plunger.(Didn't notice this until I darkened apron image.)
Straightened out Shadows ramp5 and Lightmaps flasher7 edges.(By making X and Y control points same number.)
Lowered left bullseye target under plastic so top does not show through plastic.
Lowered pegs above upper targets,(and a 4 others), so red doesn't show through plastics.
Lowered upper-left rollover divider so not seen through plastic.
Added 3 screw primitives to left side of apron.
Darkened apron and lit up cards on apron. (I was going to add Battlestar Galactica logo to apron, but then noticed there was no Scorpion logo on apron except on coin card. I didn't want to clutter apron with logo.)
Pulled bottom of side rails out slightly so side wall didn't cut through.
Changed side rail pics to ones that look like chrome.
Changed sidewalls and top wall in DT view to stars.
Added "plungerreleasefree" sound effect that plays when no pinball is in plunger lane.
Added 18 FS Backdrop pics that can be toggled with left magna-save key (L-CTRL).
Added 6 Bumper Cap pics that can be toggled with right magna-save key (R-CTRL).
Added 6 Drop Target pics that can be toggled with letter "M" on keyboard.
Default apron is darkened, but light version can be toggled with letter "N" on keyboard.

I first would like to thank Allknowing2012 for allowing mods without permission. I would also like to thank him for making a great table!! I also would like to thank anyone else who helped contribute to this masterpiece, including John90803, Wolis, Drybonz, Thalamus, and HauntFreaks!!
There is much more important info on original download page.
They put in alot of time and work on the original table, and it is appreciated!! So if you like this mod, I would encourage you to thank the original author of the table, as I have only made a few changes!
Original Table... 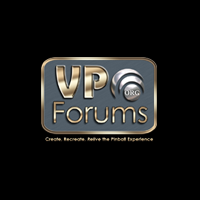 I also would like to thank STAT for his "Team Change script", which my script is based on.

I also would like to thank JPSalas for his GI Effect and Lut script, which I implemented on this table.

This table has a buzzing sound that progressively goes up in pitch.
(Part of the Rom I think. I will try to remove this buzzing soon!!)

Place music in your music folder located where you installed Visual Pinball.
(DO NOT PLAY THE MUSIC AS THIS MAY ADD A TAG TO MP3 AND RENDER MP3 USELESS!!)

Added 2 nvram files. One for 5 ball and one for 7 ball. (For 3 ball no nvram is needed.)
(Copy nvram into nvram folder where Visual pinball is installed. To go back to 3 ball just delete the nvram.)

I included with table, 3 wheel images and 2 different dB2S backglasses with 4 versions each. Regular Orange LEDs, Blue, Red, and Yellow.

If the flippers are not working at all, you need to update to the newest VP10.5 Beta, or go to Line 228 and change..